One fan knelt down in front of Lionel Messi and started shining the Argentina captain's boots. Messi laughed, received a hug from the fan and gave him his sweater before a security guard pulled him away.

Argentina's open training session ahead of the FIFA World Cup ended in disorder on Wednesday as more than a dozen fans invaded the pitch and reached Lionel Messi and his team mates before security guards could intervene.

One fan knelt down in front of Messi and started shining the Argentina captain's boots. Messi laughed, received a hug from the fan and gave him his sweater before a security guard pulled him away. (All the latest FIFA World Cup photos) 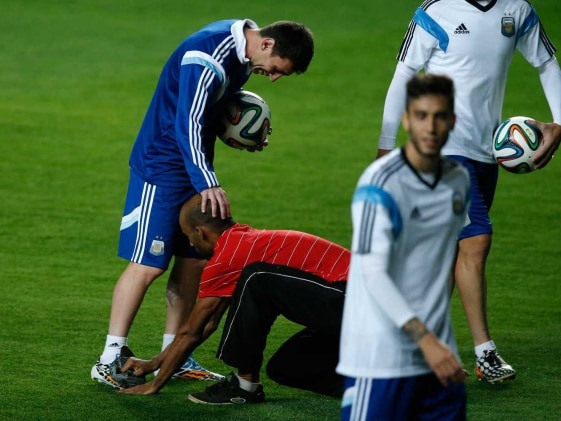 Other fans ran off with one of the balls that the Argentines had used during the training session.

Argentina-Brazil is one of the world's fiercest football rivalries, but you couldn't tell from the scenes at Independencia stadium in Belo Horizonte.

After cueing for hours to get free tickets, some 10,000 people watched the practice, many of them in Argentina shirts.

While some where visitors from neighboring Argentina, the majority appeared to be local residents who, at least temporarily, had switched allegiances.

"Brazilians like Argentina. The rivalry is a myth," said Vinicius Andrade, 20. 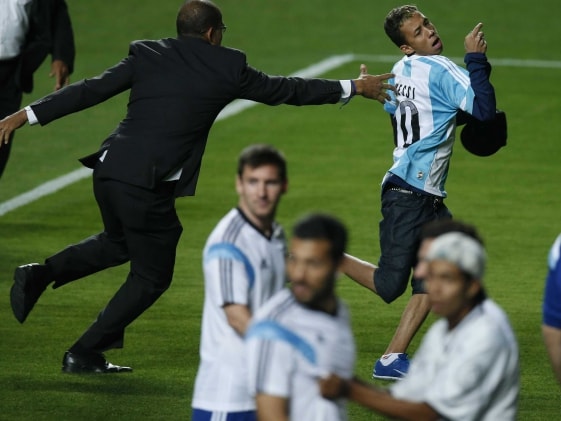 A security guard fails to stop a fan who invaded the pitch wearing an Argentine jersey.

Tiago Tanure, a 16-year-old wearing an Argentina shirt, was one example. "Messi, (Sergio) Arguero. I like the team, I like the country," he said.

Debora Demetrio, 36, came to see Messi but said she was ashamed to see so many Brazilians wearing Argentina colors.

"Very sad," she said, with a smile that revealed she wasn't too upset. "I'm 100 percent for Brazil."

Fans from both sides are hoping for an epic final between the South American football powers. Brazil has won five World Cups and Argentina two.