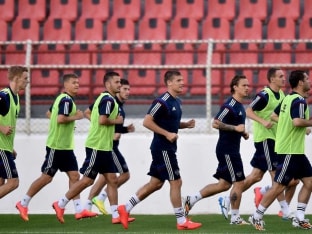 Russia's World Cup squad, headed by their Italian manager Fabio Capello, set off for Brazil on Sunday to appear in their first finals since 2002.

"We're all right and ready to depart," Capello told the press on his arrival to Moscow's Sheremetievo airport.

"The players are in a positive mood and are completely focused on the World Cup. They're ready to show their best in Brazil.

"I don't want to make any forecasts as any of participating teams have chances to win the World Cup before the event's kick-off. I believe the strongest one will grab the trophy."

The 67-year-old former England manager said earlier that he would settle for a place in the quarter-finals but what mattered most at the moment was to make it out of the group stages.

Russia have been drawn in World Cup Group H, with South Korea, Belgium and Algeria as they make their first appearance at the finals in 12 years.

"I've seen them all in action and I'm confident that the battle for the places in the play-offs will be really tight.

"But I believe in my team and their capability of winning a place in the World Cup knockout stage. Russia has a good team."

Forward Alexander Kokorin said that that he remembered Russia's last World Cup campaign in South Korea and Japan in 2002 adding that thye squad intended to perform better in Brazil.

"I was 11 when I watched that World Cup," Kokorin said.

"I expected our team to chalk up wins, but that campaign wasn't successful. Today our fans expect us to perform well in Brazil and we are all set to do our best to make them happy."

Around two hundred supporters were at the international airport to give the squad a send-off, chanting: "Ros-si-ya!"

Russia's skipper Roman Shirokov, who will miss the World Cup because of a knee ligament injury, was also at Sheremetievo to wish his teammates well in Brazil.

Shirokov will undergo knee surgery in Finland next week. He was replaced by Rubin Kazan midfielder Pavel Mogilevets in the squad.

Russia will open their World Cup campaign against South Korea on June 18.