The English team is banking as much on their football skills as on Steve Peters - a sports psychologist who has been hired to instill a killer instinct during the FIFA World Cup in Brazil. 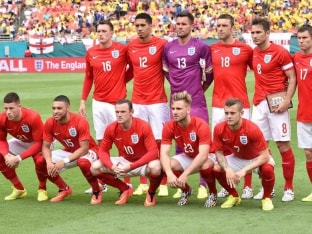 Portugal have Cristiano Ronaldo as their clinical penalty marksman, but if England are thrust into another World Cup sudden death clash their heads may turn to Steve Peters.

The renowned sports psychologist has been hired to put steel into a squad often shown to lack killer instinct and which has the World Cup's worst penalty shootout record.

England lost on penalties in 1990, 1998 and against Ronaldo's Portugal in the 2006 World Cup quarter-finals. Germany, by comparison, have played four and won four.

England are practising penalties "a lot," according to team captain Steven Gerrard, who saw his 2006 penalty saved.

"It is a difficult situation to put into words and describe it. There is a lot of pressure," he told the BBC this week.

"You have an awful lot more time to think about your penalty and what is at stake is a lot bigger and it is a pressure situation."

Failing to handle pressure was one of the reasons given by former manager Fabio Capello for England's failure to shine at the 2010 World Cup.

England drew 1-1 with the United States in the group stage and lost 4-1 to Germany in a round of 16 humiliation.

"It is a mental thing. Absolutely," Capello said at the time.

"When you are under pressure, big pressure, sometimes the legs do not work normally," Capello said.

England head to the Brazil World Cup with Gerrard and star striker Wayne Rooney, both burdened by psychological issues that could weigh down their country's chances.

Hodgson believes that Peters is the solution.

As well as working with Gerrard's Liverpool club side during their rise to Premier League title contenders, Peters has also been instrumental in the careers of former snooker world champion Ronnie O'Sullivan and British Olympic cycling gold medallists Chris Hoy and Victoria Pendleton.

He could be just the man to help Rooney, whose World Cup record reads played eight matches, scored none.

The 28-year-old Rooney is desperate to atone and said he would consult Peters in a bid to overcome the pressure that comes with being England's talisman.

"I'll certainly go and speak to him and see if it can benefit me. There's no harm in doing that," Rooney said.

"I've never done something like that before but it's interesting and if it can give you an extra couple of per cent, then it's worth doing. I feel it might benefit me.

Peters may need to have a word or two with Gerrard, who has been battling to move on from the costly slip against Chelsea that denied his club the chance to win the English league title for the first time since 1990.

One of the key messages within Peters' so-called 'chimp management' model is the utter futility of "beating yourself up" over past mistakes.

Another is to live with perspective and to adopt a mindset that puts doing your best far above the actual outcome of the sporting event.

"You get feedback from the athlete themselves and then I reflect on what we could have done differently," Peters said.

Having the likes of Rooney and Gerrard willing to believe in Peters' work is a far cry from the baffled reaction to another England manager's attempt to work on the mental side of the sport.

When Glenn Hoddle drafted in faith healer Eileen Drewery to help his players conquer their fears before the 1998 World Cup he was met with non-plussed looks.

Infamously, Ray Parlour responded to Drewery's attempt to use her healing hands on the midfielder with the retort; "Short back and sides, please, Eileen".

Hodgson will expect a more enlightened response from the current England squad.

"Steven Gerrard has belief in him, he wants him on board so I think he will definitely have a positive impact," added Redknapp.