With South American champions Uruguay also lurking in Group D, along with Costa Rica, both Roy Hodgson's England and Cesare Prandelli's Italy will approach their FIFA World Cup opener knowing they can scarcely afford to lose if they are to reach the last 16. 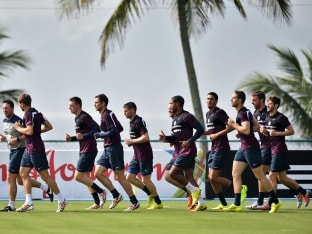 England last met Italy in the quarter-finals of the 2012 European Championship in Kiev, when Italy prevailed on penalties after a 0-0 draw that they largely dominated.

Cloying humidity and a parched pitch will add to the sense of danger when England and Italy launch their World Cup campaigns in the steamy Amazon jungle city of Manaus on Saturday.

With South American champions Uruguay also lurking in Group D, along with Costa Rica, both Roy Hodgson's England and Cesare Prandelli's Italy approach the game knowing they can scarcely afford to lose if they are to reach the last 16.

The rainforest humidity, which hovers at around 80 percent, is likely to weigh heavily on the tempo of the game and the two sides must also get to grips with a desiccated playing surface at the purpose-built Amazonia Arena.

Head groundsman Carlos Botella has admitted that the pitch is in "bad shape" and emergency work was required on Thursday to cover up its dry brown patches with green dye.

The teams last met in the quarter-finals of the 2012 European Championship in Kiev, when Italy prevailed on penalties after a 0-0 draw that they largely dominated.

Possession of the ball will be key amid the intense heat, but England striker Wayne Rooney is convinced that his side now possess the weapons to unsettle opponents of Italy's calibre.

"We've got a lot of energy, a lot of pace in the team, and if we can pick the right moments, we can really hurt teams with the pace and tempo that we can hit them at," said the Manchester United forward.

"This is the top end of football and you might get picked off. We have to stick to our plans that we've worked on the last few weeks and pick the right moment."

While expectations of an English triumph in the final on July 13 are low, Hodgson's squad is dotted with exciting young players who thrilled neutrals during the 2013-14 Premier League season.

All eyes on Pirlo

Everton midfielder Ross Barkley, 20, and 18-year-old left-back Luke Shaw will start on the bench, but 19-year-old Liverpool winger Raheem Sterling could line up in attack alongside Rooney and club-mate Daniel Sturridge.

With Danny Welbeck an injury doubt due to a thigh problem and Alex Oxlade-Chamberlain recovering from knee ligament damage, Southampton's Adam Lallana seems likely to occupy one of the flanks.

Rooney and the livewire Sterling are vying for the number 10 role in England's 4-2-3-1 formation, and whoever plays there will have the responsiblity of keeping Andrea Pirlo under close surveillance.

Eight years after masterminding Italy's triumph at the 2006 tournament in Germany, the 35-year-old Pirlo is embarking upon his final World Cup.

Italy are seeking to atone for their wretched showing at the 2010 World Cup in South Africa, when the holders crashed out in the first round.

Notoriously slow starters, the Azzurri were held to draws by the Republic of Ireland and lowly Luxembourg in their only official warm-up matches, but Pirlo has promised that they will be ready for England.

"We know England are a great team who have improved a lot with new, young players coming in," said the Juventus playmaker, who tipped the balance of the Euro 2012 shootout in Italy's favour with an audacious Panenka.

"They have good runners, but we know how to face them and have been studying England over the last few days.

"Italy have always had great games against England, as we have a different approach to the sport, so we'll give our all in our own style."

Italy, who are due to arrive in Manaus on Friday, have been spared England's injury concerns, with Marco Verratti overcoming a fever and reserve goalkeeper Salvatore Sirigu fit after damaging his ribs.

Under Prandelli, Italy have become accustomed to using several different systems. They are predicted to set up in a 4-1-4-1 shape to counter England's pace in wide areas, with Mario Balotelli the lone striker.