The young El Salvador side provided some late fightback but it was not enough to save the match against Ivory Coast who win 2-1. 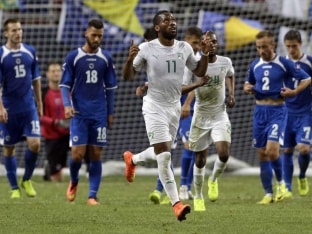 Captain Didier Drogba led the way on Wednesday as World Cup-bound Ivory Coast shook off a subpar performance against Bosnia with a 2-1 friendly win over El Salvador.

While the effort was more labored than the Elephants would have liked, goals from Gervinho in the ninth minute and Drogba in the 42nd proved enough -- even though Ivory Coast had to hold off a late charge by the young El Salvador side energized by the 75th-minute penalty struck by Arturo Alvarez.

The duo teamed up again in the 42nd, with Drogba finishing.

El Salvador's penalty chance came after Kolo Toure was called for a foul on Darwin Ceren in the penalty area.

Former FC Dallas and Real Salt Lake player Alvarez confidently fired from the spot into the side netting, thrilling a crowd that was mostly backing El Salvador.

Sabri Lamouchi's Ivory Coast had dropped a 2-1 decision to Bosnia in their prior World Cup tune-up on Friday.

They will open their World Cup campaign in Brazil on June 14 against Japan, and will also face Colombia and Greece in Group C.