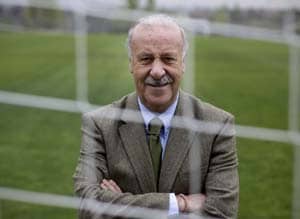 Spain arrived in Brazil on Sunday as it prepares to defend its World Cup trophy.

Wet weather welcomed the world champion's to the southeastern city of Curitiba, where Spain will be based throughout the tournament.

Spain opens its defense against the Netherlands on Friday in Salvador, with Chile and Australia also opponents in Group B.

Players and staff were whisked straight from the plane into an awaiting bus, which then took the team to its hotel and training facility at local club Atletico Paranaense, on the outskirts of the city.

Unlike in South Africa four years ago when banners and flags welcomed their arrival, there were no indications that the World Cup champion was in Curitiba apart from signs at the training facility.