On his 42nd cap David Luiz will captain Brazil against Germany in the FIFA World Cup semis, a role many believe he is naturally more suited to than the subdued Thiago Silva. 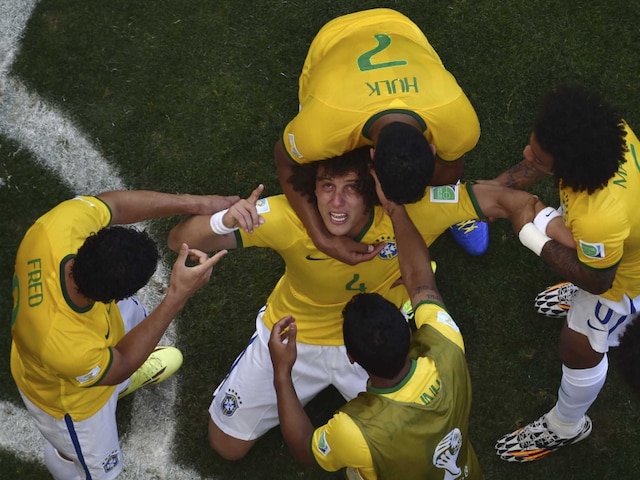 Brazil's David Luiz is surrounded by teammates after Brazil's first goal during the FIFA World Cup Round of 16 match vs Chile.© AP
Belo Horizonte, Brazil:

Frizzy locks flailing and eyes bulging, David Luiz charged towards the corner flag and karate-kicked it out the way after sending Brazil into the World Cup semi-finals with a stunning free-kick against Colombia.

His celebration a caricature of his playing syle, Luiz rarely does things the conventional way. (Germany Out to Down Neymar)

The most expensive defender ever having sealed a £50 million ($85 million) move from Chelsea to Paris Saint-Germain last month, he played the majority of his final season in the Premier League in midfield as Jose Mourinho didn't trust him to defend and is his country's second top scorer at the World Cup. (Brazil May Excel Without Neymar: Schweinsteiger)

Now in the absence of injured star Neymar and suspended captain Thiago Silva, Luiz the maverick must become a leader against Germany in Belo Horizonte on Tuesday. (All the Vital Stats of the FIFA World Cup)

On his 42nd cap Luiz will captain his country, a role many believe he is naturally more suited to than the subdued Silva. (Brazil Want Silva Ban Scrapped, Zuniga Inquiry)

Amongst the tears and crashing of Brazilian nerve against Chile in the last 16, Luiz was a shining light.

His first international goal had put his country in front and whilst others, including Silva and centre-forward Jo shied away when a penalty shootout was needed to decide Brazil's fate, Luiz stepped up to hammer home the opening spot-kick.

"I'm ready, I'm vice-captain. This group is very easy to handle because everyone is humble and fun. We act as a family, a unit," he said when pressed on how his role will change without Neymar and Silva.

With Neymar out of the tournament, Luiz has become Brazil's face of the World Cup. He already rivalled his poster boy teammate for commercial endorsements and his empassioned blaring of the national anthem has become legendary as a 200 million strong nation shuts down for every Brazil match.

More importantly, though, he is not the figure of fun he was often unfairly tarnished as in England. Since Luiz Felipe Scolari returned to take the Brazil job 20 months ago they have not lost a game in which Luiz has played the full 90 minutes.

Brazil will face the biggest test of that record yet, though, in the form of a German team sick of being nearly men at international tournaments.

"They are a great team with a great philosophy of how to play football," Luiz said of Joachim Loew's men.

"They have a lot of great players, a great coach and it will be a great game. It is a World Cup semi-final."

The bedrock of that return to form under Scolari after a shaky period under Mano Menezes has been the partnership between Luiz and Silva conceding an average of well under a goal a game.

Their familiarity may have gone, but in Bayern Munich's Dante, Luiz couldn't have asked for a better replacement for Silva in knowing how to handle the likes of Thomas Mueller and Mario Goetze.

Luiz will have good memories of Germany's Bayern contingent too. In the 2012 Champions League final he spearheaded an incredible defensive display from Chelsea in the absence of captain John Terry to deny the German giants from winning European club football's biggest prize in their own stadium.

A similarly heroic effort will be needed to prevent the Germans inflicting the same pain on Brazil in Belo Horizonte.

Comments
Topics mentioned in this article
FIFA World Cup 2014 David Luiz Brazil Football
Get the latest Cricket news, check out the India cricket schedule, Cricket live score . Like us on Facebook or follow us on Twitter for more sports updates. You can also download the NDTV Cricket app for Android or iOS.