Cristiano Ronaldo had given Portugal side a scare when he left a training session early with ice wrapped around his knee on Thursday. 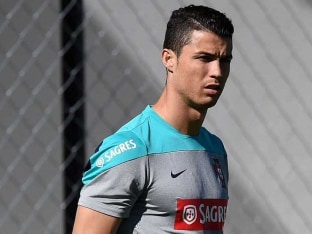 Cristiano Ronaldo is "100 percent" fit and ready for Portugal's opening World Cup match against the powerful Germans, William Carvalho said on Friday, hailing his team-mate as the best player in the world.

The Real Madrid star had ice applied to his troublesome left knee after training on Thursday, sparking fears over his fitness ahead of Monday's Group G opener.

Portugal captain Ronaldo featured in a 5-1 friendly win over the Republic of Ireland in the United States earlier this week before being substituted.

He had missed his country's previous two warm-up games because of thigh and knee injuries.

"Regarding his physical fitness, that's more for the doctors and physios to reply but of course he's a very important player for us, the best in the world," said Sporting Lisbon defender Carvalho.

Carvalho said Ronaldo had been tired at the start of World Cup training after an exhausting season but his vast experience was crucial to the team as they battle to get out of a daunting group also featuring Ghana and the United States.

Paulo Bento's squad boasts the likes of Moutinho, Pepe and Nani but Ronaldo, who scored four goals over two legs in his team's play-off victory against Sweden to reach Brazil, is pivotal to their hopes.

Germany 2006 semi-finalists Portugal are not considered among the favourites in Brazil even though they are ranked fourth in the world but Carvalho, the subject of transfer speculation linking him with a move to Manchester United, is unperturbed.

"We respect everyone's opinion. We know we're not considered as favourites but we will do our work," he said. "Our work is to give the best for our team."

When asked about Germany's injury problems in the run-up to the tournament, he said that was not an issue for the team.

"We also had a few problems with injuries recently, with players not training at 100 percent, but we don't really think too much about the opponents' injuries. All we have to do is to concentrate on our own job."

Portugal play Germany on June 16 in Salvador and Ghana take on the United States in Natal.