Brazil defeated Panama 4-0 i n a warm-up match but a pleased Luiz Felipe Scolari insists the team needs to keep getting better ahead of the FIFA World Cup. 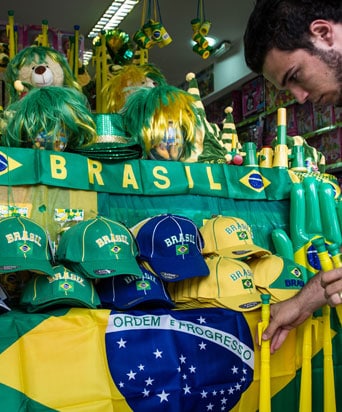 Coach Luiz Felipe Scolari is happy with how Brazil is improving ahead of the World Cup opener next week.

Following a 4-0 win over Panama in its second-to-last warmup, Scolari said adjustments still need to be made, but he feels his team is on track to being ready for the opener against Croatia in eight days.

Scolari said he was "still worried," but not as much as he was a few days ago when the team came together to finish off its preparations. He was confident that if the team continues getting better like this, it will arrive at the opener in good condition.

Brazil's final warmup is on Friday against Serbia in Sao Paulo.

Brazil struggled early against Panama on Tuesday, prompting jeers from fans at Serra Dourada Stadium. The team improved after Neymar opened the scoring from a free kick in the 26th minute and then cruised to victory.

Scolari said one of the reasons he picked Panama as its first opponent before the World Cup was because he knew his team wouldn't be fully ready to face a better squad at this point.

"It's all going according to plan if you take into consideration that we haven't played together in more than three months, and only had seven days to prepare. The players know they are not ready," he said. "We weren't ready to face a stronger opponent right now."

to help us personalise your reading experience.

Against Serbia, Scolari will welcome back captain Thiago Silva, who stayed at the training camp outside Rio de Janeiro to improve his fitness. Midfielders Paulinho and Fernandinho also didn't play on Tuesday, but they will also be available on Friday, when Scolari will use all of his usual starters.

The coach's concerns began after training on Sunday. He was visibly upset because he felt the players were not displaying the same attitude they showed in recent friendlies and when they won the Confederations Cup last year.

"I'm still concerned, but not as much as I was on Sunday," he said. "Against Panama I saw a little bit more of the same things that I saw during the Confederations Cup and the friendlies. There's still room for improvement."

Brazil has won 14 of its last 15 matches, but Scolari said that won't mean a thing if the team doesn't win the World Cup.

"That streak is nice, but we need to win eight more matches, the friendly on Friday and then seven more," he said. "It's the only way we can make history."