The young Brazilian team has been under enormous pressure this FIFA World Cup but coach Luis Felipe Scolari has been a calming influence. 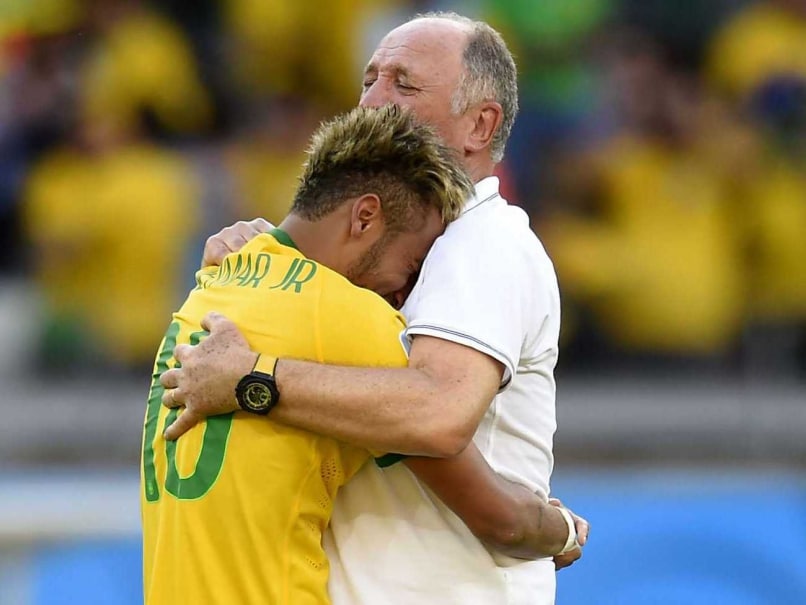 Brazil striker Neymar in tears after his team qualified for quarters.© AFP
Fortaleza:

Luiz Felipe Scolari didn't hesitate when he saw Neymar lying on the ground, his face buried in his hands, crying. The coach calmly walked over and picked the player up, pulled him to his chest and embraced him for a long time. (Also read: Thiago Silva tears into critics over tears)

Brazil had narrowly escaped elimination against Chile in the second round of the World Cup. The young Brazil star had just played one of the most difficult games of his life. (Preview: Brazil take on spirited Colombia)

Scolari knew he had to be there for him. The same way the coach has been there for everyone else in this young Brazilian team carrying the responsibility of winning the World Cup at home.

Players say "Big Phil" has been like a father to them at the World Cup.

"He is a friend, he is like a dad," Brazil captain Thiago Silva said. "You can always talk to him if you are going through a difficult time. He is the type of coach who will do anything to try to make you feel better, no matter what."

Big Phil has won the players over with the right balance of discipline and support.

"He is always there for us," defender David Luiz said. "He is there to advise us, to help us, to praise us, to reprimand us. He is very transparent in what he does and what he says. That's how he works. We have the liberty to go talk to him whenever we want."

After leading Brazil to the title in the 2002 World Cup, the charismatic coach was seen as the perfect man to command Brazil in its quest for a sixth world trophy. He was a favorite among local media and fans who knew the tournament at home would require someone special in charge.

"We don't see Felipao as a boss," right back Dani Alves said. "He is our leader. A boss will give you orders, a leader will work with you, stand in front of everything for you."

The Brazilian confederation hired Scolari saying that his experience and uncanny motivational skills would be crucial for the Selecao.

Silva saw those skills at work before the team's opening match at this World Cup. He had to choke back tears when he started talking about Scolari in a recent news conference.

"He had some very emotional words for us in the dressing room before the opener," Silva said, trying to stay composed. "He is very special to all of us. He has always been there for us, even when he was going through a difficult moment himself. He will always stay by our side."

Scolari's speech had come just two days after the death of his nephew in a car accident ahead of the opening match. A few weeks earlier, he had to leave the team's training camp to attend the funeral of one of his brothers-in-law.

"He knows how to motivate the players," midfielder Ramires said. "He knows exactly what each player needs to hear. He knows when to be tough on us and when to be supportive."

Scolari remains outspoken and straightforward as always. He still has a strong character and still paces up and down the sidelines, waving his arms and yelling at players and referees.

But he has also shown a side that he used to keep to himself in the past. In one of his news conferences, Scolari openly admitted being insecure at times at the helm of Brazil.

"When I'm with the players I can't show that I'm worried," Scolari said. "But when I'm alone, analyzing what's ready and what's not ready in the team, I often feel a little insecure. But I can't be like that when I'm with them. I have to make sure they remain confident, I have to take some of the pressure off them."

The 65-year-old Scolari, who thrived as Portugal coach at the 2004 European Championship and the 2006 World Cup, still hasn't decided about his future after the tournament in Brazil, but said in the past that he would consider retiring after coaching the hosts.

Comments
Topics mentioned in this article
Brazil FIFA World Cup 2014 Football
Get the latest updates on ICC T20 Worldcup 2022, check out the Schedule and Live Score. Like us on Facebook or follow us on Twitter for more sports updates. You can also download the NDTV Cricket app for Android or iOS.