Portugal won the friendly match against Mexico without Cristiano Ronaldo who missed the game due to injury. 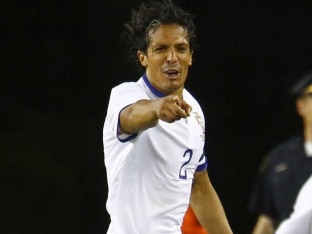 With the 2013 FIFA world player of the year sidelined for the second game in a week, Portugal needed extra time to beat Mexico 1-0 on a header by Bruno Alves on Friday night.

"We don't know," he said through a translator.

Portugal, ranked fourth in the world, is in one of the toughest World Cup groups with Germany, the United States and Ghana.

"We know we'll have many difficulties because all the teams are very well-organized, strong teams with great individual players, and they'll create a lot of difficulties for us," Bento said.

Mexico, ranked 20th after barely qualifying for the World Cup with a playoff win over New Zealand, showed improvement in its final friendly before its opening game Friday against Cameroon.

"The team demonstrated that (it) can do big things. We have to finish our attacks," Mexico coach Miguel Herrera said through a translator. "When you are dominating in the game, you can't lose in the last 30 seconds."

El Tri had the edge in the second half before Joao Moutinho's direct kick from about 35 yards was headed in by Alves in the 93rd minute.

Mexico started most of the players expected to be in its opening World Cup lineup. But Herrera must decide between Jesus Corona and Guillermo Ochoa as his starting goalie. Ochoa replaced Corona at halftime.

"Now I'm in a worse situation," Herrera said. "Both have done a great job, and now I will suffer the rest of the week to determine who will start."

Until Alves scored, Mexico had the best chances in the second half, with Hector Herrera forcing goalkeeper Eduardo to make two key saves.

Ronaldo, the second-leading goal scorer in Portugal history, also was sidelined for Portugal's 3-1 loss to Brazil in Foxborough last Sept. 10 because of tendinitis. And he missed last Saturday's 0-0 tie with Greece.

Portugal was without two other injured players, midfielder Raul Meireles and defender Pepe. There was no word whether they would play in the World Cup opener. The team plays its final pre-World Cup friendly Tuesday against Ireland at MetLife Stadium in New Jersey.

With a crowd of 56,292 at Gillette Stadium, both teams played more conservatively in the first half, with Portugal forward Eder having the best chances with four shots.

In the 52nd minute, Andres Guardado fired a 22-yard shot with his left foot that just went wide right. Then Herrera's shot from 6 yards on the right was knocked down by a charging Eduardo in the 62nd minute. And in the 68th minute, Eduardo stopped a 20-yard shot by Herrera.

Mexico completed its warm-up matches but must play in the World Cup without key midfielder Luis Montes. He broke his right leg last Saturday in a 3-1 win over Ecuador in Arlington, Texas. Three days later, Mexico lost to Bosnia and Herzegovina 1-0 in Chicago.