The Brazilian football team is always under pressure to win the FIFA World Cup. This year though, the players are under additional pressure of lifting a nation's morale.

Wearing a chic scarf in Brazil's yellow and green colors, Sao Paulo newsstand owner Ana Carmo is ready for the World Cup, with high expectations for her beloved team. "They are under heavy pressure. They are obligated to win it," said Carmo, 35, who festooned her stand with a large flag of Brazil. Brazilians always expect their team to lift the World Cup trophy every four years, especially now when the five-time champions are hosting it in the land of "the beautiful game." 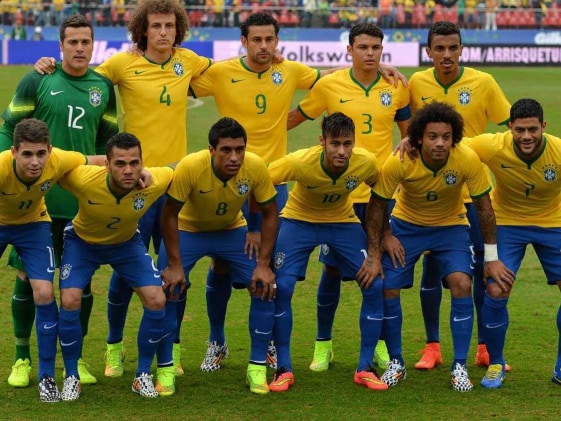 But this time, star forward Neymar and his 22 teammates also face the burden of lifting a morose nation after waves of protests over the billions spent to host the tournament that kicks off Thursday and general malaise over the state of the economy and living conditions in what had once been held up as a model of surging growth in an emerging economy.

Rio metro workers Tuesday called off a threatened strike after winning a wage increase of 8 percent. They will now earn the equivalent of $386 a month. A five-day strike in Sao Paulo, where the cup is to begin, was suspended Monday. But they are threatening to resume it Thursday if 42 fired workers are not rehired. Carmo, meanwhile, is happy the players have a chance to shine at home, but like many Brazilians she is concerned about how much money was spent on hosting the cup.

"Brazil has invested and lost a lot with the cost of the tournament. The team must win in beautiful fashion. The cup is in Brazil. They can't lose," Carmo said with an optimistic smile.

After the initial euphoria when Brazil was picked in 2007 to host the cup, support has fallen amid delays in building stadiums and transport infrastructure, causing the bill to soar to $11 billion. A survey published by polling firm Datafolha last weekend reflected Brazil's optimism about its team and pessimism about the tournament's legacy: 68 percent believe they will win the cup but 54 percent say hosting it will do the country more harm than good.

Some fans gave the squad a warning shot last Friday when they booed Brazil after a lackluster 1-0 victory over Serbia in a rain-soaked warmup friendly in Sao Paulo. Marcos Guterman, author of "Football Explains Brazil," said the players "face much bigger pressure than in normal circumstances, than if the country was calm."

"With all these problems, they face double the pressure," Guterman told AFP. "The mood and state of mind of the Brazilian fan will depend on how the team does. It depends on Neymar and the rest of the team," he said.

The stakes are equally high for President Dilma Rousseff, who could face an angry nation if Brazil get knocked out of the cup before the final in Rio de Janeiro on July 13. Rousseff, who is running for re-election in October, has repeatedly defended the tournament, insisting that the investments in infrastructure will benefit Brazilians for years. But many projects have been delayed and ended up over-budget.

"Politics and football are very much linked in this World Cup," said Jose Paulo Florenzano, an anthropology professor at Sao Paulo's Pontifical Catholic University. "Anything can happen. A good run by the national team could awaken patriotic feelings and muffle protests. Conversely, an unexpected elimination could unleash a wave of protests," he told AFP.

The national mood is already dour. Brazilians have waited longer than usual to decorate their streets, homes and cars with flags, and the threat of more protests and strikes looms large over the World Cup. In the 1970 World Cup, the military dictatorship seized on the nation's football obsession to distract Brazilians from their day-to-day woes, said Pablo Azevedo, a sports management expert at Brasilia University.

After a disappointing showing at the 1966 World Cup, he said, the government backed unprecedented team preparations that included starting training well before the tournament, hiring the best coaching staff and playing in high-altitude to adapt to Mexico City's thinner air. "Brazil celebrated the victory for more than a year," Azevedo said.

But analysts say Rousseff will only enjoy a brief reprieve if Brazil wins the World Cup, with the election campaign ensuring that she will have to address the electorate's concerns soon after the tournament. "We would have a truce for a few days, maybe weeks," Guterman said. "But Brazil's reality is still there. There is still tension regarding the economic and social situation."

As she rearranged magazines in her newsstand, Carmo was optimistic that a Brazil victory would bring the boost the country needs. "It will bring a lot of happiness to the hearts of Brazilians," she said, "and they will forget their problems a little bit."