Bosnian coach Safet Susic has said that his team is ready to face the entire Argentine force and will not keep a special eye on Lionel Messi in their Group E FIFA World Cup. 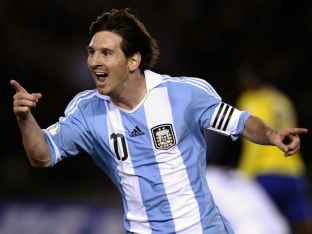 Bosnia coach Safet Susic said on Monday he didn't plan to man-mark Argentine superstar Lionel Messi for his side's first ever World Cup showdown on Sunday in the Maracana.

"We never put a player on another ... We have (Muhamed) Besic but putting him only on Messi wouldn't be very good," said Susic after a 5-1 warm-up win over a youth select from Brazilian outfit Santos.

Susic told reporters he preferred a zonal system and that whose job it would be to close Messi down would depend on where the Barcelona striker happened to be at any given time.

He did not give any hints as to his line-up, saying only that "everyone is ready to face Argentina."

Bosnia beat an under-21 Santos select on the island of Guaruja just off the coastal city of Santos in Sao Paulo state.

Stuttgart's Vedad Ibisevic netted twice and Izet Hajrovic of Galatasaray, Senad Lulic of Lazio and Edin Visca of Istanbul BB also got on the scoresheet in rainy conditions.

As well as Argentina, Bosnia will also meet Iran and Nigeria in Group E.