While Yaya and Kolo Toure from the Ivory Coast and Hondurans Wilson and Jerry Palacios can give each other fraternal advice and morale boosting chats, there will be none of that between the Boateng half-brothers 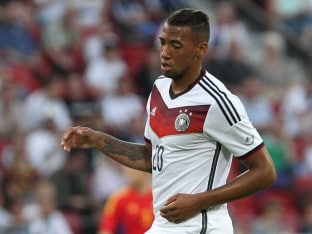 Kevin-Prince Boateng and Jerome Boateng will be one of several pairs of brothers to line up at the World Cup finals, but unlike the others they will be on opposing sides.

Even more unusually, just as in 2010, they will face each other in the group stage.

While Yaya and Kolo Toure from the Ivory Coast and Hondurans Wilson and Jerry Palacios can give each other fraternal advice and morale boosting chats, there will be none of that between the Boateng half-brothers.

For Ghanaian forward Kevin-Prince and German defender Jerome -- who made history in 2010 becoming the first brothers to face each other in a World Cup finals -- there is a strict no contact policy before they play each other even in the Bundesliga, where the former turns out for Schalke 04 and the latter for champions Bayern Munich.

This will hold true for the brothers -- whose father is Ghanaian but both have German mothers -- till Germany play Ghana in Fortaleza on June 21 in their Group G game.

However, at least they arrive at this World Cup on speaking terms.

This was not the case back in 2010 when Kevin-Prince, who is the elder at 27 while Jerome is 25, had been vilified in Germany for a tackle on Michael Ballack in the English FA Cup final between his side Portsmouth and Chelsea which ruled the German star out of the finals.

That tackle only served to add fuel to the fire in Germany of Kevin-Prince's image, where he was viewed as a wild child who had been in trouble with the police as a youngster, and has several tattoos associated with gangster life on his body.

Jerome, though, is fed up with this image of his brother and spoke out last year defending him over that tackle and also of his pride when Kevin-Prince was hailed for leading his then AC Milan team-mates off the pitch in a pre-season friendly when he heard racist abuse from the other team's fans.

"It (the tackle) just happened, and it fitted the mould of a lot of people at that time. The Ghetto kid from the deprived area, the gangster footballer from Wedding (an area of Berlin) and whatever else was published about him," he told German newspaper Der Taggespiegel last year.

"But now this -- I am proud of him. It could have ended differently."

While the Boatengs have had their differences, the bond between the Palacios boys, Wilson who is an attacking midfielder with Premier League side Stoke City and Jerry a striker for Costa Rican outfit Alajuelense, has been made even tighter because of their grief over the murder by a kidnap gang of their younger brother Edwin in 2009.

"If either of us scores a goal it would be a very special moment to stay with us for life," Wilson told the Stoke Sentinel last month.

"It would mean everything and we would dedicate it to my family and especially my brother Rene (Edwin's middle name), who lives on in our hearts.

"Everything we do is for our little brother in heaven."

The Toures, like the Boatengs, have found their relationship stretched at some point, notably as Yaya's club Manchester City edged the elder Kolo's side Liverpool for the Premier League title last season.

However, Yaya, who played with Kolo at City before his elder sibling moved on, says that his respect for his brother knows no bounds.

"You have to understand the relationship we have," Toure said in 2011.

"He is my big brother. I have always looked up to him and listened to his advice. He is the wise, strong one.

"When we were younger Kolo was the better player because he was older and had such an appetite for hard work.

"He is a fantastic guy who has always put me first."