Divock Origi scored in the 88th minute as Belgium registered a 1-0 win over Russia to make it to the last 16. 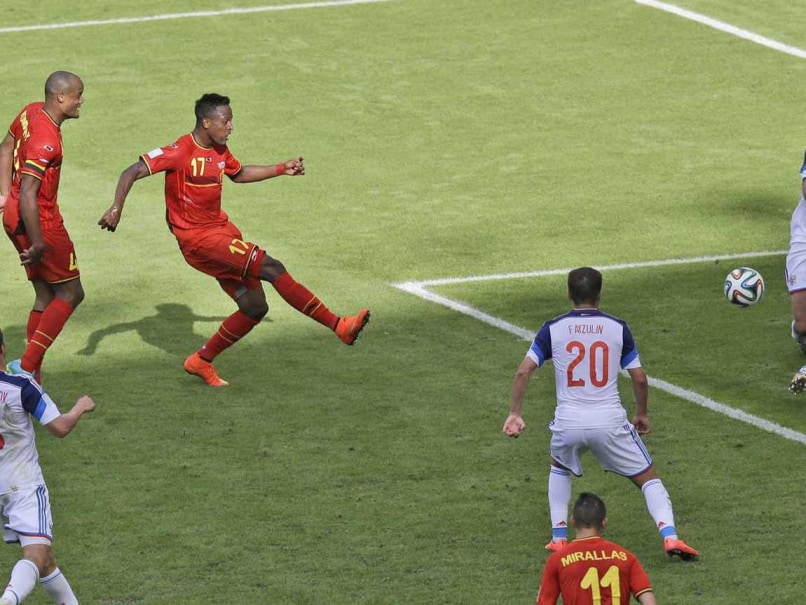 Teenaged substitute Divock Origi slammed a last gasp goal Sunday to secure Belgium a 1-0 victory over Russia and a place in the World Cup's last 16.

The win was a new step in Belgium's emergence as a European power, 12 years after their last appearance at the World Cup finals. Russia, who are to host the 2018 finals, have a growing qualification mountain in front of them. (Match highlights | Matchcentre)

The 19-year-old Origi who plays with Lille in France came on for Romelu Lukaku as the frustrating Group H game seemed destined to end in stalemate until the 88th minute goal.

Seconds after fellow substitute Kevin Mirallas had hit Igor Akinfeev's post with a free kick, Eden Hazard burst down the left past two defenders and pulled the ball back for Origi to hit into the net from close range.

The win left Belgium as clear Group H leaders with a maximum six points from two games after their 2-1 win over Algeria.

Russia are in danger of going out having started with a draw against South Korea following a huge blunder by keeper Igor Akinfeev.

Now coach Fabio Capello must rally the troops for a do or die contest against Algeria in the last game of the first round group on Thursday.

Belgium and Russia made a bright start and the opening minutes saw chances at both ends.

Victor Fayzulin, a Zenit St Petersburg midfielder full of running, swept into the the box and fired in a low effort that Belgian keeper Thibaut Courtois smartly stopped low to his right

The Belgians, coached by Marc Wilmots, who scored in a 3-2 win for his country in a 2002 group meeting against Russia, responded as Dries Mertens pulled the midfield strings.

Mertens accelerated into the danger zone only to thump an effort wide of the right hand post of Akinfeev, retained despite his butterfingers mistake against the Koreans in Cuiaba.

Mertens drilled another effort wide as the Belgians, semi-finalists in 1986 when they were finally undone by Diego Maradona, turned the screw.

With the runners-up in the group likely to face Germany, assuming the three-time champions top their group, there was every incentive for both sides to chase the win.

Russia enjoyed a purple patch as the opening half came to an end, Fayzulin smacking a volley just over following a corner.

Denis Glushakov, booked for clattering Merhrtens, then crossed for Alexander Kokorin, who avoided being the meat in a Vertonghen-Vincent Kompany sandwich but sent a free header off target.

Capello, striving to improve on his 2010 flop when in charge of England, again left veteran forward Aleksandr Kerzhakov out of the starting 11, despite his goal against South Korea. A cameo appearance came too late.

The Italian coach, whose entire squad is home based, also left creative Alan Dzagoev on the bench at the outset.

Belgium were forced into a change after half an hour when defender Thomas Vermaelen, hurt in the warm-up, was unable to continue after suffering what appeared to be a hamstring problem.

Having endured a 56-minute virtual no-show from talented but isolated striker Lukaku, Wilmots -- once again urged to don a jacket by stewards to avoid his white shirt being taken for a Russian one -- withdrew him, sending on Origi.

Lukaku was clearly agitated at being hauled off for Origi for the second time in two matches and his displeasure was evident as he sat down on the bench.

Wilmots proved it wasn't an Everton issue as he swiftly brought on Kevin Mirallas, Lukaku's Toffees teammate last season, for the tiring Mertens.

Watching royals King Philippe and Queen Mathilde saw the Belgians survive a huge let off with 12 minutes remaining when Andrey Eshchenko, on for Aleksei Kozlov, found space but dragged a shot just wide.

In a frantic finale Mirallas' low freekick bounced off the base of the post before Capello finally gave Dzagoev his chance with nine minutes left.

But almost as soon as he arrived, Origi struck, leaving Capello uncomfortably close to a repeat of the early exit he suffered four years ago with England.

Comments
Topics mentioned in this article
Belgium Russia FIFA World Cup 2014 Football
Get the latest updates on ICC T20 Worldcup 2022, check out the Schedule and Live Score. Like us on Facebook or follow us on Twitter for more sports updates. You can also download the NDTV Cricket app for Android or iOS.