Belgium's current crop of players have never experienced stakes this high. As the team gets set to battle Argentina in the quarterfinals of FIFA World Cup 2014, the mood in the camp is upbeat and confident. 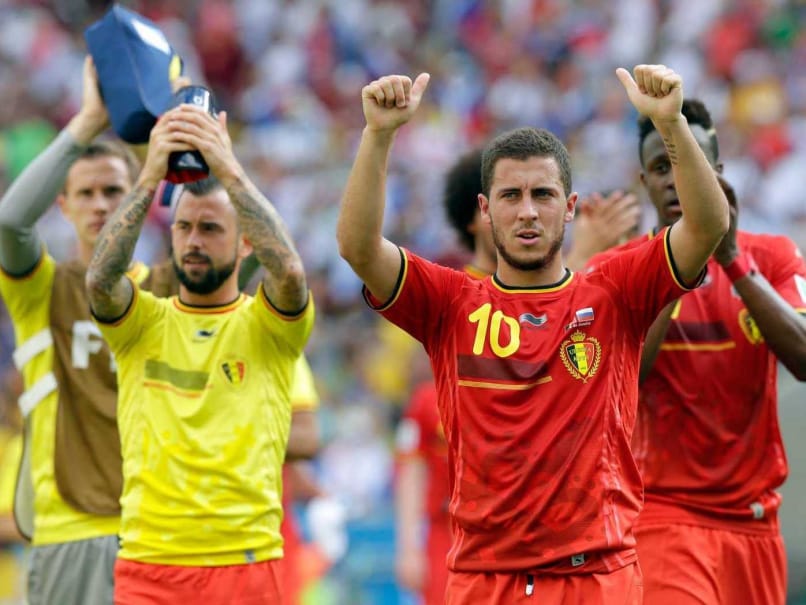 The Belgian team consists of young players who are determined to realise their drams of World Cup glory.© AP
Brasilia:

When World Cup quarter-finalists Belgium last qualified for the tournament in 2002, the current squad were a disparate gaggle of schoolboys poised unknowingly on the brink of global stardom. (Complete coverage)

Eden Hazard, then a small, slender 11-year-old, was making a name for himself as a skilful winger with the junior sides of hometown club Royal Stade Brainois. (Main preview: Belgium face tough battle, face Argentina)

Vincent Kompany, the current captain, was embarking on his youth career with Anderlecht, while Adnan Januzaj, the Manchester United winger, was only seven years old -- but already a member of FC Brussels.

In their homes and football club social rooms, they will have watched on television as a side led by pugnacious midfielder Marc Wilmots progressed from the group phase, only to lose to Brazil in the last 16.

Twelve years later, in Brazil, they are the players carrying the hopes of their country, and Wilmots is the figure urging them on from the technical area.

Twelve now play for leading Premier League clubs, while some -- including Chelsea winger Hazard and the young goalkeeper Thibaut Courtois -- are considered to be among the best players in the world.

"All the young players are suddenly playing abroad," said experienced centre-back Daniel Van Buyten, the only player aged over 30 in the squad.

"They all used to play in Belgium. They were still good players, but only as good as the Belgian league."

After years of expectation, Belgium's 'golden generation' have finally arrived on the global stage and against Lionel Messi's Argentina on Saturday, they can truly fulfil their potential. (Related read: Tears guaranteed as final eight teams get set for war)

Belgian football has undergone a revolution in recent years, after former technical director Michel Sablon produced a radical blueprint for youth development in 2006, but the emergence of the current side also owes much to serendipity.

Most were well on their way to becoming professionals by the time Sablon's proposals had taken effect, and several players -- such as Hazard, Kevin Mirallas, Thomas Vermaelen, and Jan Vertonghen -- spent their formative years outside Belgium anyway.

Rather than progressing through the Belgian youth system en masse, the current side did not begin to take shape until the 2007 Under-21 European Championship in the Netherlands.

Of the 23 players who played in that tournament, where Belgium reached the semi-finals, eight are in the current squad: Vermaelen, Mirallas and Vertonghen, plus Marouane Fellaini, Axel Witsel, Nicolas Lombaerts, Anthony Vanden Borre and Laurent Ciman.

A year later, at the 2008 Olympic Games in Beijing, Kompany and Mousa Dembele replaced Lombaerts and Witsel, and Belgium reached the last four again.

"After the Olympics in 2008, where we finished fourth, I think we started to realise the kind of potential we had," Fellaini told FourFourTwo magazine before the World Cup.

"The year before, we played at the European Under-21 Championship with a good team -- we had Jan Vertonghen, Thomas Vermaelen, Kevin Mirallas, Axel Witsel, Sebastien Pocognoli... Good players.

"We knew we had a good generation. So we thought, now let's see what happens in five years' time."

Five years on from Beijing, the national team were still awaiting a major breakthrough after successive failures to qualify for the 2008 and 2012 European Championships and the 2010 World Cup in South Africa.

But things finally clicked in qualifying for this year's World Cup, where Belgium finished unbeaten, and despite some laborious displays in Brazil, they stand on the verge of equalling their best-ever performance at the tournament.

For Wilmots, however, talk of era-defining moments can wait.

"Golden generation?" the Belgium coach said last week. "We can say that the day my team wins something!"

Comments
Topics mentioned in this article
Eden Hazard Vincent Kompany Lionel Messi Belgium Argentina FIFA World Cup 2014 Football
Get the latest updates on ICC Women's Cricket World Cup 2022 and IPL 2022, check out the Schedule , Live Score and IPL Points Table. Like us on Facebook or follow us on Twitter for more sports updates. You can also download the NDTV Cricket app for Android or iOS.