Argentina defeated Slovenia 2-0 in a warm-up but not before stirring up a political controversy ahead of the FIFA World Cup. 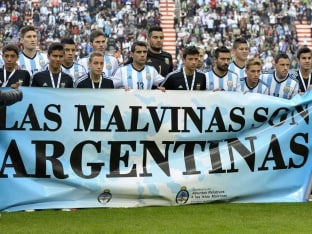 Argentina inflamed their rivalry with England on the eve of the World Cup on Saturday, unfurling a banner claiming sovereignty of the Falkland Islands before defeating Slovenia 2-0.

Goals from Ricardo Alvarez and skipper Lionel Messi ensured a winning send-off for the home side before 52,000 adoring fans at La Plata, north of Buenos Aires.

Argentina are in Group F in the World Cup against Nigeria, Bosnia and Iran.

But the squad will have raised eyebrows in Britain showing off their politically-charged banner declaring "Las Malvinas Son Argentinas (The Malvinas are Argentine)" to the crowd before kick off.

The banner is regularly put on show before Argentina's games. But the proximity to the World Cup brought new attention.

The South Atlantic islands have been ruled by Britain since 1833 but Argentina claims them and in 1982 attempted to seize control, sparking a brief but intense war.

Renewed diplomatic tensions over the islands have added a confrontational edge to a series of titantic battles between England and Argentina at the World Cup.

Four years after the World Cup in 1986, Diego Maradona outraged the English with his punched "Hand of God" goal in the 2-1 quarter-final victory in Mexico.

Maradona later said bitterness over the Falklands conflict had motivated the Argentines against England.

"I know publicly we all used to say football has nothing to do with war, but intimately we knew a lot of our boys had died, shot down like little birds," Maradona said. "And subconsciously, we were aware of that."

In 1998, an epic last-16 match at the World Cup in France ended in a 2-2 draw with Argentina prevailing in a penalty shoot-out.

The match was famous for the red card shown to England's David Beckham for kicking Diego Simeone.

Four years later Beckham avenged the loss at the 2002 finals in Japan, scoring the only goal in a 1-0 victory over Argentina which helped to eliminate the South Americans in the first round.

England and Argentina are not expected to cross paths at the World Cup in Brazil however, unless they both reach the semi-finals.

And the banner added to the party atmosphere in the La Plata stadium.

Frontline stars Messi, Sergio Aguero and Angel di Maria started the game on the substitutes' bench and only came on after an hour. Argentina were already one up through a 25 metres shot by Inter Milan's Alvarez.

Di Maria and Aguero laid on Messi's goal after 75 minutes.

"We are going to Brazil with a lot of desire," the Barcelona star said after the game, in which he scored his 38th goal for Argentina.

"We are going to fight to come back with the World Cup," he added. Argentina are second favourites with most bookmakers after hosts Brazil.

"We are a very strong team. We have been playing well for a while and gaining confidence," he said.

Coach Alejandro Sabella said he wanted to get the tournament started.

"I'm never calm," he said. "I'm always nervous and now even more anxious about the beginning" of the World Cup, he told a post-match press conference.

Argentina start against Bosnia on Saturday.