Argentine goalkeeper Sergio Romero saved twice in Wednesday's penalty shoot-out as Argentina triumphed 4-2 against the Netherlands in the semifinal at Sao Paulo's Corinthians Arena to progress to the final after a goalless 120 minutes. 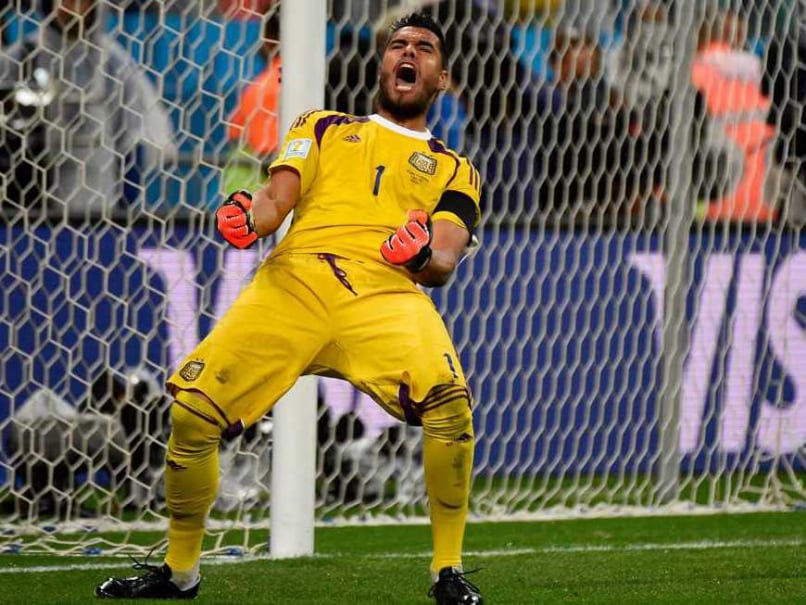 Argentina's goalkeeper Sergio Romero reacts after saving a penalty during penalty the shoot-out following extra time during the semi-final football match between Netherlands and Argentina of the FIFA World Cup at The Corinthians Arena in Sao Paulo on July 9, 2014.© AFP
Sao Paulo:

Having spent most of the last 12 months out of favour at club level, Sergio Romero has emerged from the shadows at the World Cup to star in Argentina's run to the final.

Romero saved twice in Wednesday's penalty shoot-out as Argentina triumphed 4-2 against the Netherlands in the semifinal at Sao Paulo's Corinthians Arena to progress to the final after a goalless 120 minutes. (Highlights)

Reduced to the role of spectator for much of a disappointing match, the 27-year-old stepped forward to deny both Ron Vlaar and Wesley Sneijder from the spot.

And with captain Lionel Messi quiet throughout the evening that allowed Romero to be hailed the hero, even if he admitted luck played its part. (Also read: Messi on target to match Maradona)

"Penalties are all about luck that is the reality. I had confidence and thanks to God it turned out well," said the giant shot-stopper after the match.

Romero has been an assured presence behind a solid Argentina defence throughout the competition, and has kept clean sheets in all three knockout matches.

His displays have been the perfect response to those at home who suggested he should never have been called up in the first place by coach Alejandro Sabella, far less chosen to play ahead of both Agustin Orion and Mariano Andujar.

However, Romero's trajectory at club level over the past year was hardly that of a player who was about to go all the way to the World Cup final.

He left Italian side Sampdoria towards the end of last summer's transfer window to join big-spending Monaco on a season-long loan.

When he arrived he expected to be the Ligue 1 side's first-choice 'keeper, but coach Claudio Ranieri preferred Croatian Danijel Subasic and Romero only made the first of his three league appearances in April.

Otherwise, he had to settle for a handful of run-outs in domestic cup games, but Sabella never lost faith in a player who won Olympic gold with Argentina in Beijing in 2008.

"He helped me throughout what was the most difficult time of my career," Romero said on Wednesday in a show of gratitude to Sabella.

"It was the first year that I had spent sitting on the bench. So I had to thank Alejandro for everything he did for me over the year."

Sabella himself insisted on giving credit to his goalkeeping coach Juan Jose Romero and his "huge binder" of information on all prospective penalty takers at the competition.

But if that helped Argentina's goalkeeper, the defeated Dutch coach Louis van Gaal admitted that he was not surprised to see Romero produce such heroics.

Indeed, van Gaal knows all about Romero's ability, having coached him during a successful spell in the Netherlands with AZ Alkmaar.

The Dutch Eredivisie was Romero's first stop in Europe when Van Gaal signed him from Buenos Aires giants Racing in 2007, and two years later they won the domestic title together, pipping the country's more famous names.

"I didn't teach Romero to stop penalties, but we were the club that brought him to Europe because he was a big talent," van Gaal said.

"The truth is he's a person who teaches a lot. I'll be forever grateful for him helping me out in such a different country."

With his loan at Monaco having come to an end, his club future may be uncertain, but Romero was determined to savour the moment on Wednesday before turning his full focus to Sunday's final against Germany at the Maracana Stadium.

"The moment should be enjoyed. I am immensely happy," he said.

Comments
Topics mentioned in this article
FIFA World Cup 2014 Sergio Romero Argentina Football
Get the latest updates on ICC Women's Cricket World Cup 2022 and IPL 2022, check out the Schedule , Live Score and IPL Points Table. Like us on Facebook or follow us on Twitter for more sports updates. You can also download the NDTV Cricket app for Android or iOS.