Before Wednesday's FIFA World Cup 2014 semifinal against the Netherlands which Argentina won 4-2 on penalties, goalkeeping hero Sergio Romero's place in the Argentine team was the subject of debate going into the tournament after he spent almost all of the last season on the substitutes' bench at French Ligue 1 club Monaco. 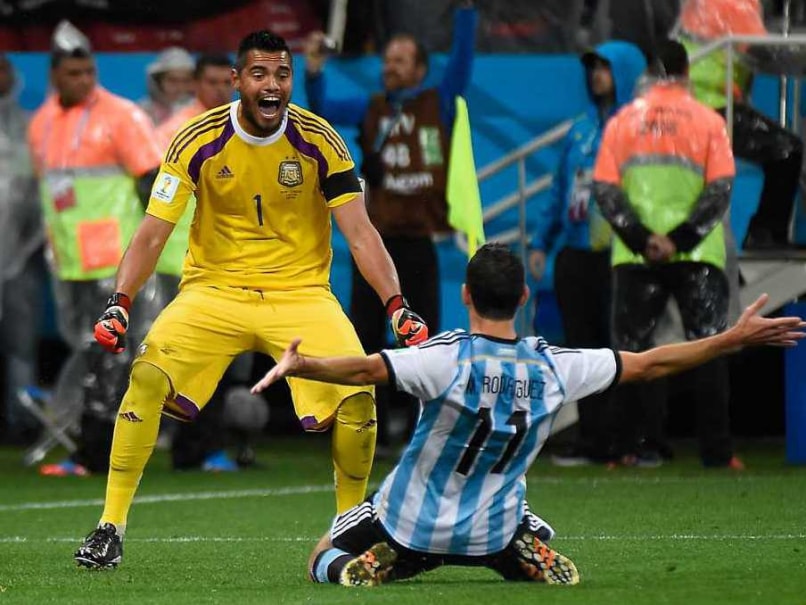 Argentine goalkeeper Sergio Romero said he had luck on his side when he blocked two Dutch penalties on Wednesday to take his country into the World Cup final.

"Penalties are all about luck, that is the reality. I had confidence and thanks to God it turned out well," he said after the 4-2 penalty shootout triumph over the Netherlands that decided the semi-final. (Highlights)

The 27-year-old Romero blocked shots by Ron Vlaar and Wesley Sneijder to Argentina to victory after a goalless 120 minutes at the Corinthians Arena. Argentina now clash with Germany in Sunday's final in Rio de Janeiro.

"We go away happy and now we will prepare for the final from tomorrow. The moment should be enjoyed and we are going step by step."

Romero's place in the team was the subject of debate going into the tournament after he spent almost all of the last season on the substitutes' bench at French Ligue 1 club Monaco. (Also read: Messi on target to match Maradona)

However, he has proved his critics wrong throughout the tournament. Argentina have won every match played in Brazil.

"Let's enjoy it. I am immensely happy. I dedicate this to my Mum and my wife," said Romero.

"We have hoped for this since the first day. These lads never give away anything."

Striker Sergio Aguero, who came off the bench and scored one of his side's penalties, was equally ecstatic at reaching the final.

"This means so much. A lot of people didn't think Argentina would get to the final but we knew what players we had, very good players individually.

"The match was about seeing who make a mistake and nobody did," added the Manchester City striker.

The Dutch were eliminated from a major tournament on penalties for the fifth time as Argentina converted all four of their kicks.

Maxi Rodriguez, who replaced Ezequiel Lavezzi during the shoot-out, was one of the Albiceleste's successful penalty takers, and he can now look forward to playing in a World Cup final at the age of 33.

"It is impressive. We know the pain we have been through, and we deserved some kind of happiness," he said.

"Now we have to play the final but that is what we have dreamt of ever since we left Buenos Aires. We must make the most of it and let's hope that the last 90 minutes are on our side.

"I dedicate this is to my family and all of Argentina, to everyone who is crying like us, who have had a dream since they were little and now might be able to see it fulfilled."

Comments
Topics mentioned in this article
FIFA World Cup 2014 Sergio Romero Argentina Football
Get the latest updates on ICC Women's Cricket World Cup 2022 and IPL 2022, check out the Schedule , Live Score and IPL Points Table. Like us on Facebook or follow us on Twitter for more sports updates. You can also download the NDTV Cricket app for Android or iOS.