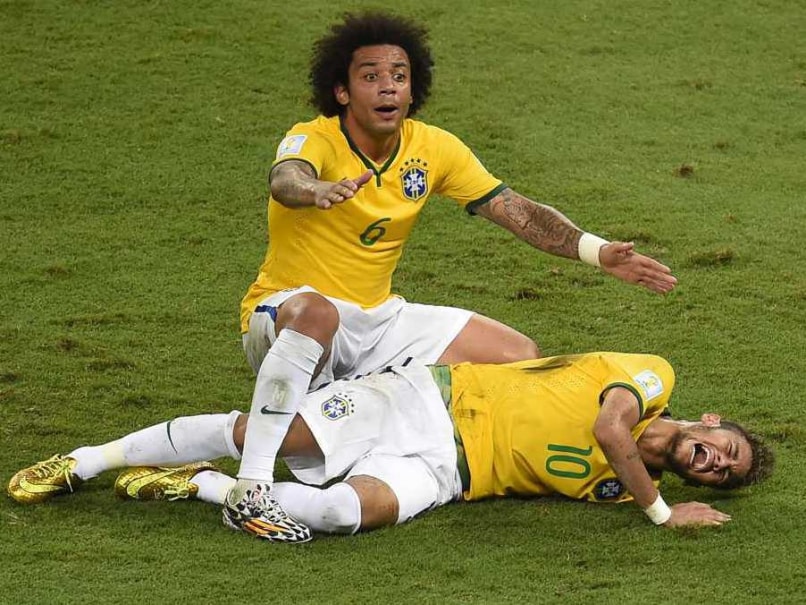 Defender Marcelo shouts for help after Brazil's forward Neymar was injured during the quarter-final football match between Brazil and Colombia at the Castelao Stadium in Fortaleza during the 2014 FIFA World Cup on July 4, 2014. Brazil star Neymar was ruled out of the World Cup after that with a back injury, team doctor Rodrigo Lasmar said. Lasmar told reporters Neymar suffered a fracture in the third verterbra of his back during Brazil's bruising 2-1 quarter-final victory over Colombia.© AFP

According to media reports, a team of Ayurveda medical experts on Wednesday submitted a report to Kerala Chief Minister Oommen Chandy charting out how injured Brazilian star Neymar could be treated. The Ayurveda doctors have prescribed a two-month treatment plan for Neymar, who fractured his third vertebra during Brazil's FIFA World Cup quarterfinal match against Colombia last Friday.

According to the report, three weeks of treatment will be carried out in Brazil which will be followed by a month-long therapy in Kerala. The football-loving state is known for its Ayurvedic treatment for injuries.

"We have submitted the report to the Chief Minister expressing our willingness to give high quality treatment to Neymar," P.K Ashok, principal of Ayurveda Medical College, Thiruvananthapuram, who compiled the report, told Indian Express. "Now the government will discuss the report in the Assembly on Thursday and propose the treatment to the Brazilian government," Ashok added.

Chandy had on Tuesday asked Ayurveda Medical Education director T Sivadas to submit the report on the possibility of offering the traditional treatment to 22-year-old Neymar. Chandy acted after a suggestion by Kerala Football Association president K M I Mather.

TV channels in Kerala Tuesday went berserk, saying injured Brazilian footballer Neymar was likely to come to the state to undergo Ayurveda treatment. (Zuniga a coward for challenge on Neymar: Silva). The TV channels said the Brazilian football federation has got in touch with the Chief Minister. However, Chandy denied such reports. (Brazil will play for nation, Neymar)

Chandy said there was a request from football fans in Kerala, asking the government to put up a proposal for treating Neymar using Ayurveda. (No action over challenge on Brazil's Neymar) "I spoke to Health Minister V.S. Sivakumar, who called up leading doctors of the state-run Ayurveda college here. They got details of Neymar's injury through the internet and (were) studying what sort of treatment should be adopted."

Comments
Topics mentioned in this article
FIFA World Cup 2014 Neymar Football
Get the latest updates on ICC Women's Cricket World Cup 2022 and IPL 2022, check out the Schedule , Live Score and IPL Points Table. Like us on Facebook or follow us on Twitter for more sports updates. You can also download the NDTV Cricket app for Android or iOS.