Neymar suffered a serious back injury during the match against Colombia. The Brazilian says while his dreams this FIFA World Cup may be over, his teammates are sure to lift the coveted trophy. 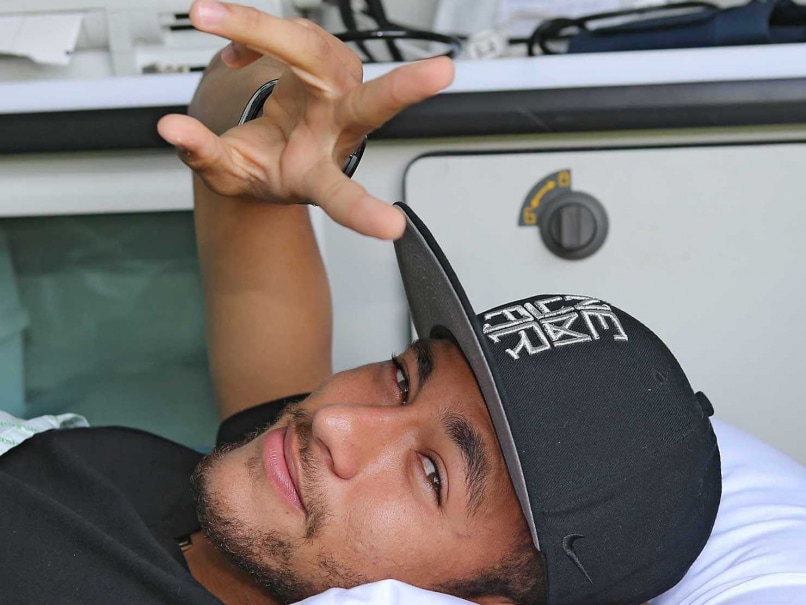 Handout picture released by the Brazilian football Confederation (CBF) of Brazil's star Neymar flashing the V sign before his departure to his home in Guaruya.© AFP
Rio de Janeiro:

Brazil football star Neymar said on Saturday that his dream of playing in the World Cup final had been stolen from him by a fractured vertebrae inflicted by a Colombia defender.

"They took away my dream of playing in a World Cup final, but the dream of being world champion has not ended," Neymar said in remarks released by the Brazilian football federation. (Youthful Neymar carried hopes of a nation)

"There are two games left and I am sure my teammates will do everything to lift the trophy," he said. (No Neymar, no party for Brazil)

The Brazil squad applauded the 22-year-old Barcelona striker at an emotional farewell at their Teresopolis camp before he was taken to Rio de Janeiro by helicopter. (FIFA analysing Neymar injury)

Neymar was ruled out of the rest of the World Cup after Colombian defender Juan Zuniga kneed him in the back in a challenge in Friday's quarter-final. Brazil play Germany in the semi-finals on Tuesday.

FIFA said it is investigating the incident to see whether disciplinary proceedings are necessary. And Zuniga again insisted Saturday that there was no malicious intent in his challenge.

"I deeply regret the sad injury suffered by Neymar during the game between Brazil and Colombia," the defender said in a letter sent to Neymar that was quoted by the Colombian Football Federation.

"This situation resulted from normal game action and there was no ill-intent, malice or negligence on my part," Zuniga added. (Who will replace Neymar?)

Neymar was collecting the ball in the 88th minute, with his side leading 2-1, when Zuniga launched a jumping challenge from behind and kneed the Brazilian in the lower part of his back.

Doctors said Neymar fractured the third vertebrae in his lower back. He was stretchered off the field in agony.

Comments
Topics mentioned in this article
Neymar Brazil Colombia FIFA World Cup 2014 Football
Get the latest updates on ICC Women's Cricket World Cup 2022 and IPL 2022, check out the Schedule , Live Score and IPL Points Table. Like us on Facebook or follow us on Twitter for more sports updates. You can also download the NDTV Cricket app for Android or iOS.