In a World Cup where goalkeepers have done well, USA's Tim Howard made a record number of saves (16) in his team's pre-quarters clash vs Belgium. 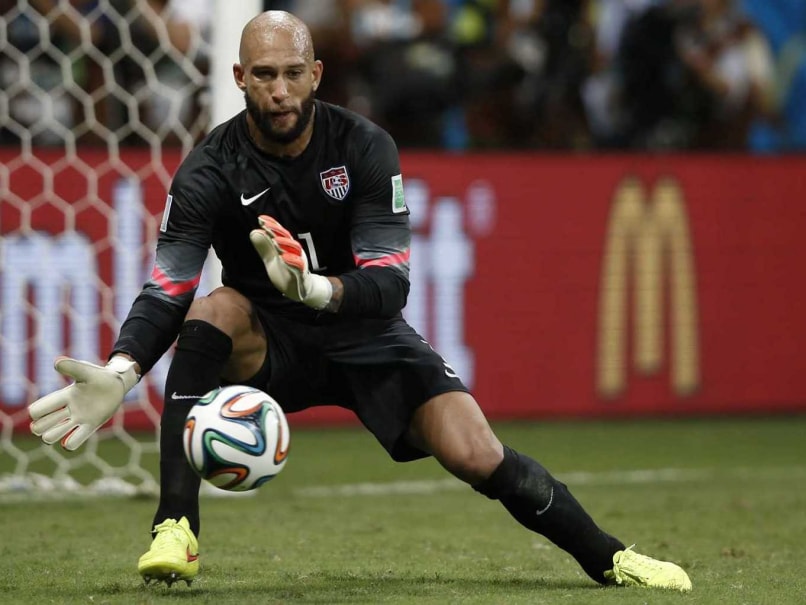 Lionel Messi, Neymar and Robin van Persie make the headlines, but the World Cup's real heroes have been goalkeepers like Tim Howard, Guillermo Ochoa and Julio Cesar who throw themselves into the line of fire. (Vital Statistics: 154 goals! 10 Red Cards and More | All Fixtures)

"Two words .. TIM HOWARD #respect," was the simple Twitter comment made by Belgium's captain Vincent Kompany within minutes of his country finally beating the United States in the last 16 on Tuesday.  (Tim Howard, the anchor of an evolving US team)

Belgium's Romelu Lukaku, who hit the winning goal, and Dries Mertens, both hugged Howard at the end of their 120-minute onslaught on the 35-year-old Everton goalkeeper.

Howard's 16 saves, some at point blank range, two spectacularly flicked over the crossbar, were a record for a goalkeeper in a World Cup match since 1966. 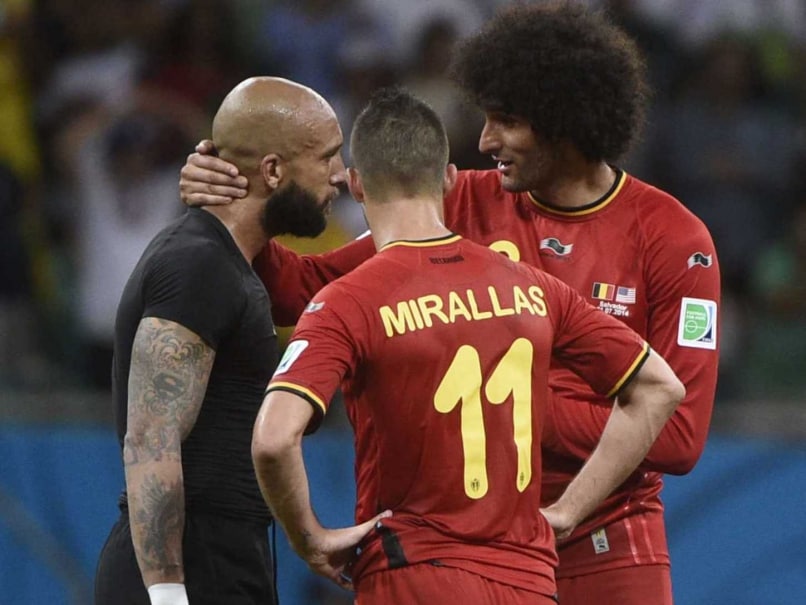 Club Mates! Former Everton midfielder and Belgian international Marouane Fellaini has a chat with Everton and US goalkeeper Tim Howard as Everton and Belgium player Kevin Mirallas looks on after the pre-quarters clash in the FIFA World Cup

The US defence seemed unable to resist the Belgian attack of Mertens, Divock Origi and Eden Hazard. US coach Jurgen Klinsmann said Howard kept the team in the game right to the end. The Americans had chances to equalise right until the final seconds.

"How Tim played tonight was just phenomenal," Klinsmann said. "As the game went on, on the back of Tim's performance we got back in the game."

Similar compliments have been paid to Ochoa for giving Mexico an unlikely 0-0 draw with Brazil in Group A, and Cesar for his heroics in keeping Chile at bay in a game Brazil won to reach the quarterfinals. 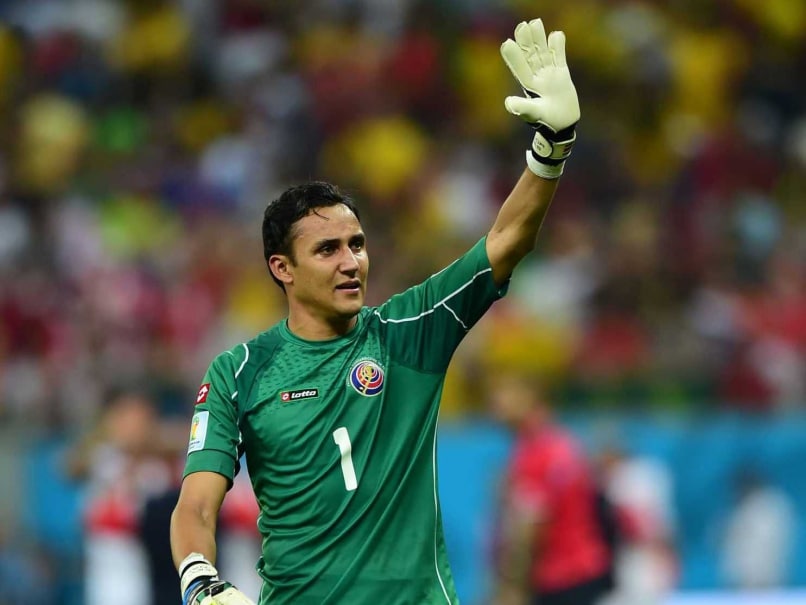 Costa Rica's 'keeper Keylor Navas was the hero as his side, down to 10 men, beat Greece in their last 16 game.

Germany's Manuel Neuer has been hailed for rushing out of his penalty area to clear the ball as North African minnows Algeria poured forward on Monday.

"He reacted like a libero and protected us from many situations that smelled of danger," said Germany coach Joachim Loew.

Neuer has a good job with Bayern Munich, but for some of the other goalkeepers, the brilliant performances could be a career saver. 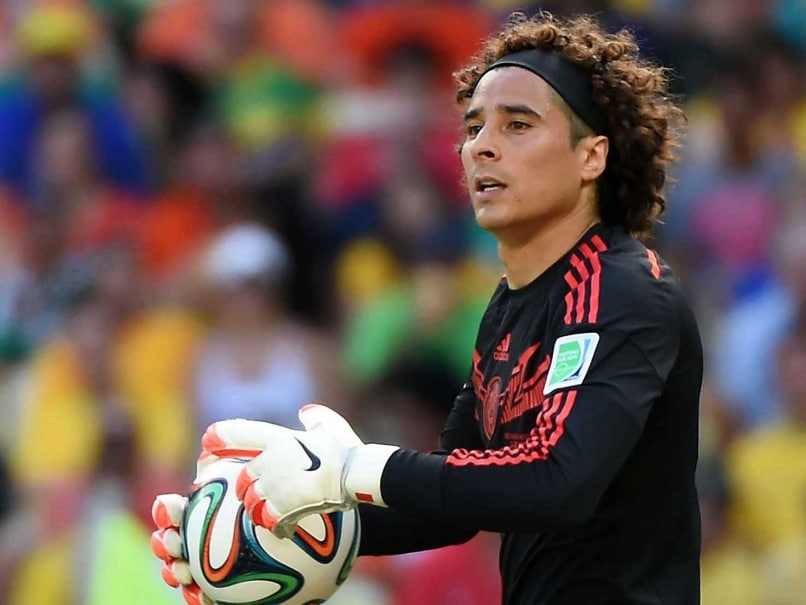 Mexico's Ochoa, who held Brazil at bay for 90 minutes, was without a club after his French side Ajaccio were relegated to the second division and his contract ran out last month.  (Guillermo Ochoa, Mexico's Saviour)

One sprawling one-handed save from a powerful header by Brazil striker Neymar has been compared to the legendary stop by England's Gordon Banks against Brazil's Pele at the 1970 World Cup.

"I feel really flattered," Ochoa, 29, said of the comparison. "Of course I'd rather have less work," he added.

His shift in Fortaleza has earned interest from English sides including Liverpool, according to media reports.

Costa Rica's Navas was another goalkeeper to earn man-of-the-match honours as his side beat Greece to reach the quarterfinals for the first time.

Navas has been hailed as his country's new "Lucky Rabbit", the nickname for Luis Gabelo Conejo, who kept goal for Costa Rica at the 1990 World Cup finals.

Having thwarted Italy and Uruguay in landmark group victories, Navas again performed spectacular gymnastics as he punched away a spot kick by Greece's Fanis Gekas in a penalty shootout.

Navas who plays in Spain for Levante said: "I have already faced great players and I am not scared. It's a good challenge for me to play against the best."

Brazil's Julio Cesar hopes his two penalty shootout saves against Chile will turn him from a national villain to a respected figure alongside the country's other football legends.

The 34-year-old has faced national humiliation since his mistake was blamed for Brazil's defeat to the Netherlands in the 2010 World Cup quarterfinal.

Cesar revealed that he took a religious cross, given to him by his reserve Victor, when he went into the goal for the Chile shootout. He saved two penalties and Chilean Gonzalo Jara's kick came off a post and just managed to stay out of the goal.

"After the (2010) World Cup to be labelled as the villain, it was very bad for me," Cesar said. "I got the support of my family who just supported me. This allows me to have the necessary strength to go forward," said the emotional keeper fighting back tears.

Comments
Topics mentioned in this article
FIFA World Cup 2014 Tim Howard Guillermo Ochoa Keylor Navas Football
Get the latest updates on ICC Women's Cricket World Cup 2022 and IPL 2022, check out the Schedule , Live Score and IPL Points Table. Like us on Facebook or follow us on Twitter for more sports updates. You can also download the NDTV Cricket app for Android or iOS.