Argentina won 4-2 on penalties against the Netherlands after the semifinal contest finished 0-0 following extra time. They will play Germany in the final on Sunday. Netherlands playmaker Wesley Sneijder said his team deserved much better. 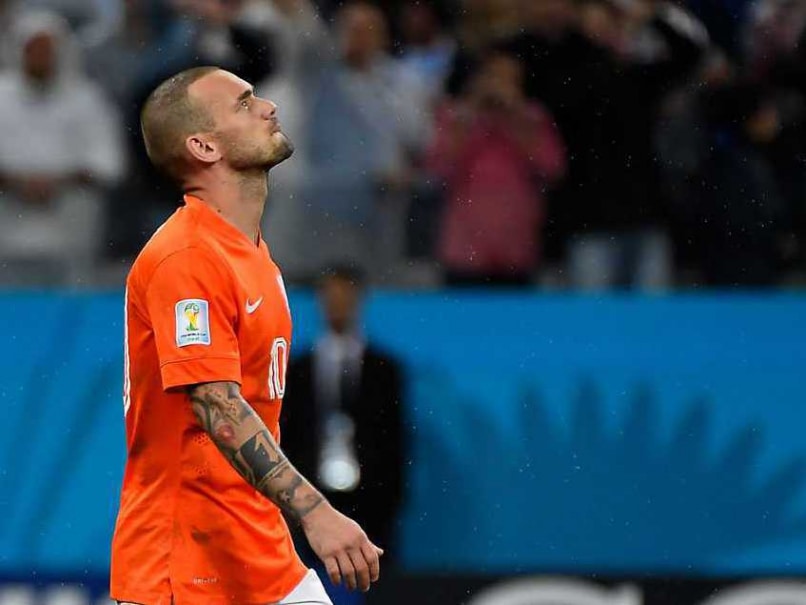 Netherlands' midfielder Wesley Sneijder reacts after missing a shot during penalty shoot-outs following extra time during the semi-final football match between Netherlands and Argentina of the FIFA World Cup at The Corinthians Arena in Sao Paulo on July 9, 2014.© AFP
Sao Paulo:

The Netherlands' penalty shootout loss to Argentina in the World Cup semi-finals on Wednesday was an unjust way for them to exit the tournament, according to playmaker Wesley Sneijder. (Also read: Dutch media mourns defeat in World Cup 'chess' game)

"Argentina were playing for penalties, which wasn't the case with us. We tried to play.

"I missed my penalty. It's a shame. But it's particularly frustrating not to have capitalised on the chances we created over the 120 minutes."

Argentina won 4-2 on penalties after the contest finished 0-0 following extra time. They will play Germany in the final on Sunday. (Highlights)

Dutch centre-back Ron Vlaar saw his opening spot-kick saved by Romero, but having produced a commanding display over the course of the game, he said that he would not let it get him down.

"Of course, I know that I played well, but positive feelings pass to one side now that I've missed my penalty.

"We're going home empty-handed. It's sad, because the only thing that counts is the title. There's still the third-place match (against Brazil). But it's not the same thing."

Comments
Topics mentioned in this article
FIFA World Cup 2014 Wesley Sneijder Football
Get the latest updates on ICC Women's Cricket World Cup 2022 and IPL 2022, check out the Schedule , Live Score and IPL Points Table. Like us on Facebook or follow us on Twitter for more sports updates. You can also download the NDTV Cricket app for Android or iOS.