Argentina midfielder Angel Di Maria limped off the field in the first half of Argentina's quarterfinal win over Belgium after straining a muscle in the back of his right thigh. 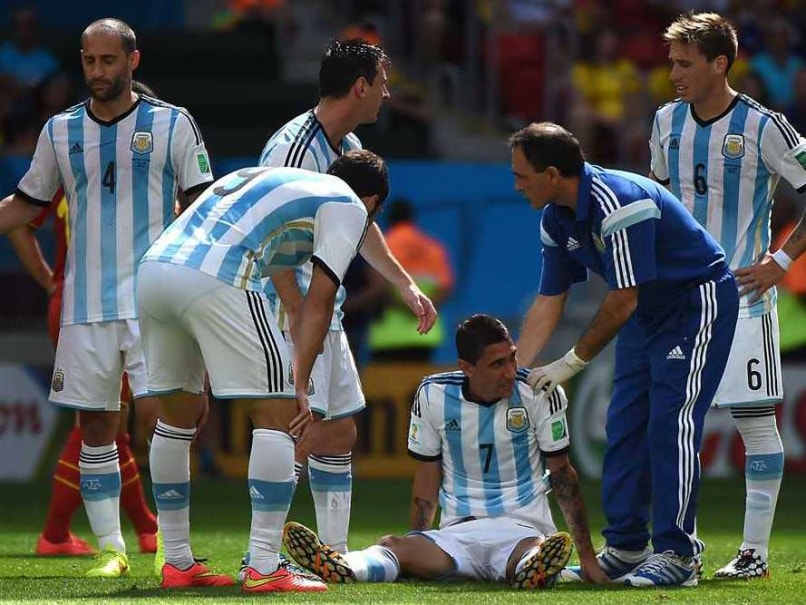 Argentina's midfielder Angel Di Maria (bottom C) is given aid after an injury during a quarter-final football match between Argentina and Belgium at the Mane Garrincha National Stadium in Brasilia during the 2014 FIFA World Cup on July 5, 2014.© AFP
Belo Horizonte, Brazil:

Argentina midfielder Angel Di Maria has been ruled out of the World Cup semifinal against the Netherlands with a thigh injury while striker Sergio Aguero has been declared fit to play after recovering from a similar problem.

Di Maria limped off the field in the first half of Argentina's quarterfinal win over Belgium after straining a muscle in the back of his right thigh.

Martinez said Aguero, who sustained a similar injury 10 days ago, had recovered in an "excellent" way.

Losing Di Maria is a big blow for Argentina as it prepares for its first World Cup semifinal since 1990. Besides Lionel Messi, he's been the team's most influential player in Brazil.

Di Maria scored the extra-time winner against Switzerland in the second round and set up Gonzalo Higuain's winning goal in the first half against Belgium on Saturday.

"He's a key player in this project," Higuain said of Di Maria.

The last time Argentina reached the semifinal stage in the World Cup was 24 years ago in Italy, when it made it to the final but lost 1-0 to West Germany.

Coach Alejandro Sabella said being among the final four was the "minimum" that Argentina expected out of this World Cup after being eliminated in the quarterfinals in two consecutive tournaments.

Sabella made two key changes to the lineup against Belgium, fielding Manchester City defender Martin Demichelis for the first time in Brazil, and having Lucas Biglia replace Fernando Gago in the midfield.

"You always hope to play," Demichelis said. "I was showing a lot of heart in practice and tried to get to the place where I would get called up."

The moves bolstered Argentina's defense, with Biglia and Javier Mascherano dropping back to help protect the early lead.

With left back Marcos Rojo returning from suspension Argentina's defense should be in even better shape for the semifinal. However, the attack is bound to suffer without Di Maria.

Comments
Topics mentioned in this article
FIFA World Cup 2014 Angel Di Maria Argentina Football
Get the latest updates on ICC Women's Cricket World Cup 2022 and IPL 2022, check out the Schedule , Live Score and IPL Points Table. Like us on Facebook or follow us on Twitter for more sports updates. You can also download the NDTV Cricket app for Android or iOS.