Internet giant Google continue to pay a 'creative tribute' to FIFA World Cup 2014 as the tournament heads into the semifinal stage. 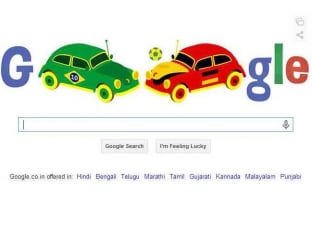 Capturing the essence of the ongoing FIFA World Cup 2014, internet giant Google have continued to dish out creative google doodles as the tournament heads into the business end with just four teams left, vying for the coveted trophy.

The latest doodle is one for the highly-anticipated semi-final clash between hosts Brazil and Germany, who are both chasing their historic eighth World Cup final spot.

Google tends to produce over 300 doodles each year and have been active throughout the 20th edition of the biggest global sporting event. Putting out a doodle on each day of the tournament, google have mixed and matched to perfection, depicting the vibrant colours, on and off the field, from Brazil.

Comments
Topics mentioned in this article
FIFA World Cup 2014 Football Brazil Germany
Get the latest updates on ICC Women's Cricket World Cup 2022 and IPL 2022, check out the Schedule , Live Score and IPL Points Table. Like us on Facebook or follow us on Twitter for more sports updates. You can also download the NDTV Cricket app for Android or iOS.