Brazil defeated Colombia 2-1 in a tense quarterfinal to set up a FIFA World Cup clash with Germany. Catch highlights here.

It's Brazil vs Germany in the semifinal after the hosts defeated Colombia 2-1 in the last-eight clash. (Matchcentre | Fixtures | Complete FIFA World Cup 2014 coverage)

3:25 IST: Brazil win 2-1 and are through to the semis, where they meet Germany.Colombia face disappointment in their first ever quarterfinal appearance.

3:18 IST:Neymar picked up a rough foul and he winces in pain. The Brazilian star was carried off in a stretcher, leaving a worried home crowd.

3:09 IST:James Rodriguez takes the kick for Colombia in the 80th minute and GOAL! He has scored his sixth goal of the tournament and it's 2-1 now. The Colombians still have hope and it could be an interesting 10 minutes.

3:08 IST: Julio Cesar commits a foul inside the box and collects a yellow card and Colombia get penalty kick. Huge moment in the game.

2:58 IST: GOAL!Sensational stuff from David Luiz as Brazil take a massive 2-0 lead over Colombia; surely, the hosts are now minutes away from a semifinal place, unless Colombia play out of their skins to come back and take this game to extra-time. 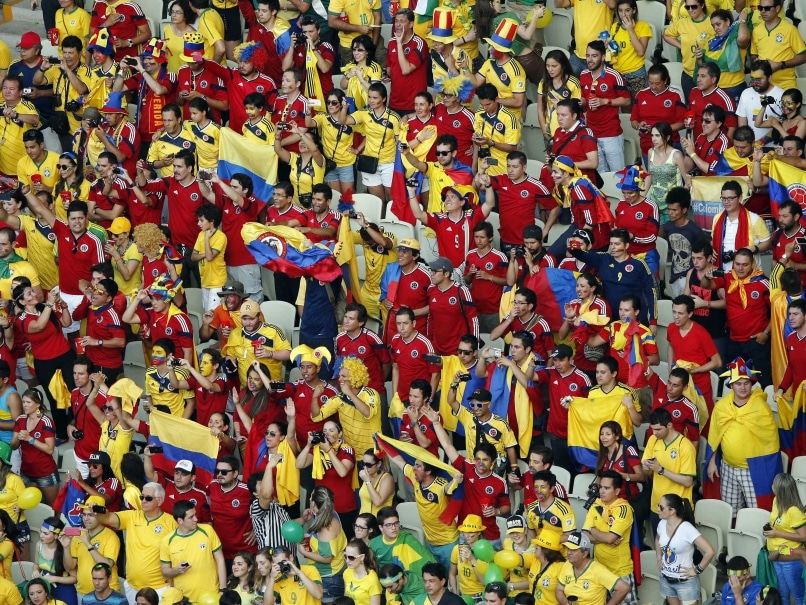 Brazil fans have a field day as their team went on the rampage against Colombia.

2:55 IST:Silva gets his second yellow card of this World Cup and the Brazilian skipper will miss the semifinal against Germany if the hosts do qualify.

2:50 IST:This is the first time Colombia are trailing in this World Cup; they have been so used to taking the lead. But up against the most successful side in World Cup history, the Colombians are feeling the heat.

2:41 IST:Eight of the 11 goals Colombia have scored, have come in the second half. Can they fight back and draw level with the Brazilians and perhaps push the game to extra-time?

2:19 IST: It's half-time and Brazil have a 1-0 lead over Colombia.The winners will clash against Germany for a place in the final. 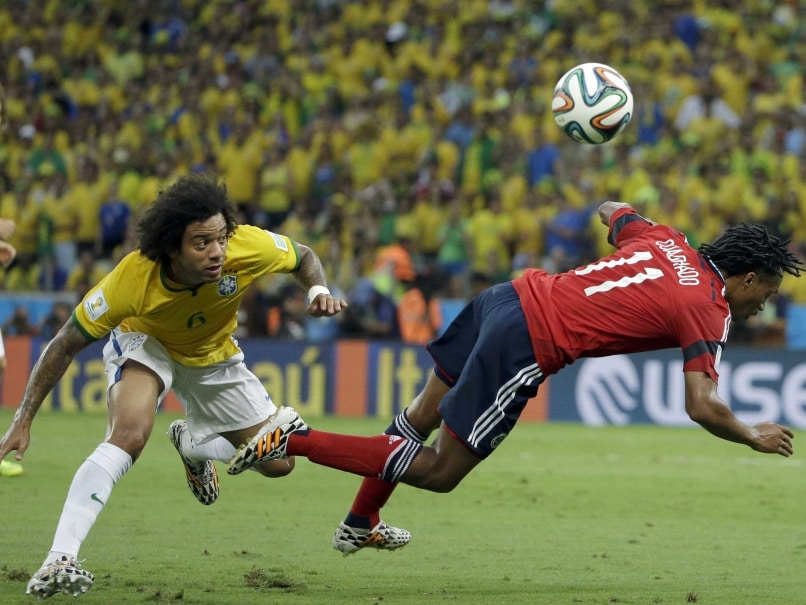 Marcelo of Brazil fights for the ball as the hosts dominated.

2:14 IST:There have been some heated moments in the game, with Colombia desperate to make a comeback.

2:00 IST:Under Scolari, Brazil won the World Cup back in 2002. Now he is coach again and are leading their quarterfinal clash against Colombia. Can the legendary manager help the hosts break their last-eight jinx? They have looked exceptional, barring some shabby defence.

1:52 IST: Not surprisingly, Brazil have been the better team all through despite some serious counterattack from Colombia. The lesser of the two Latin American sides have just not been good enough to complete their assaults on the Brazilians.

1:44 IST: Colombia will be hard-pressed to make a comeback here; they have only defeated Brazil twice in 25 matches and they have already conceded a lead.

1:39 IST: GOAL! Neymar fired in a great corner kick and Brazil skipper Thiago Silva was in a great position to score as the hosts took an early lead vs their Latin American rivals. Brazil lead 1-0. 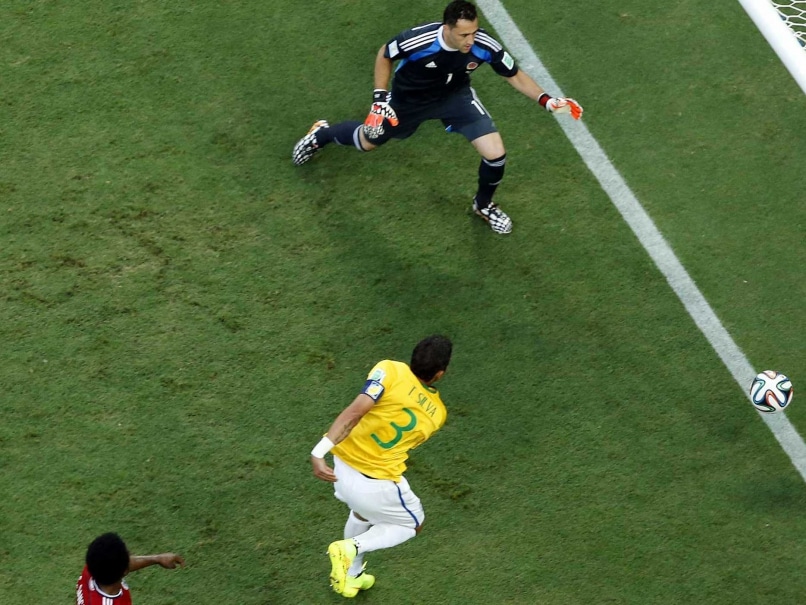 Silva made an early breakthrough for Brazil.

1:35 IST: Sanchez makes a foul and Brazil get a free kick in the third minute. Neymar takes the shot for the hosts but fails to go anywhere near the target as the ball sails past the goal post.

1:23 IST: Both captains pledge to step up vigil against racism and it's time for the national anthems.

1:09 IST: After a fine European battle, it's time for some Latin American flair. Brazil and Colombia have played each other 25 times but never in a World Cup and now they face off in the quarterfinal that the latter are hosting. What an occasion this is.

Both Brazil and Colombia have given their fans reason to cheer and celebrate. Ahead of their quarterfinal match though, Brazilians are edgy while the Colombians are partying with nothing to lose - reaching this stage was not predicted in the first place. (Also read: Top five reasons why Colombia can overcome Brazil hoodoo) 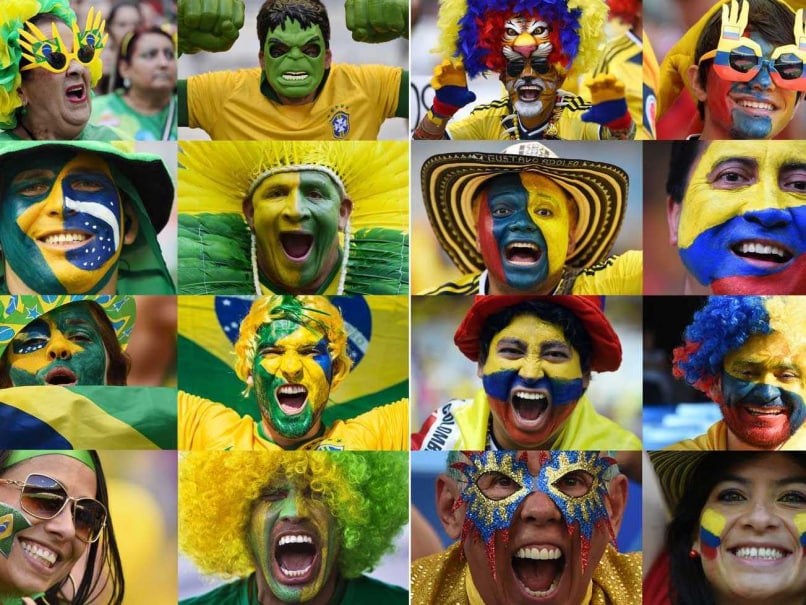 Brazil and Colombia fans have shown what football and the FIFA World Cup means to them with their passionate cheer.

Those who did not give Colombia much credit though were perhaps not aware of a certain striker called James Rodriguez. The 22-year-old has emerged as one of the biggest sensations in the World Cup and is one of the leading goal scorers with five strikes. (Related: Neymar hopes Brazil can halt Rodriquez)

Rodriguez's prowess on the field has help his team win four of their five previous matches - and convincingly at that.

In contrast of sorts, Brazil have not been entirely forceful and have had good fortune play as their 12th man on the field at times. Chile almost outplayed them in the Round of 16 but coach Felipe Scolari's side edged to a win in penalties. Its effects may have had an impact nonetheless asBrazil have brought in a sports psycologist to assist the players. Will it work wonders and give the extra tooth to the giants or can Colombia's bare knunckles knock the wind out of Neymar and Co.?

Comments
Topics mentioned in this article
Football Brazil Colombia Neymar James Rodriguez FIFA World Cup 2014
Get the latest updates on ICC Women's Cricket World Cup 2022 and IPL 2022, check out the Schedule , Live Score and IPL Points Table. Like us on Facebook or follow us on Twitter for more sports updates. You can also download the NDTV Cricket app for Android or iOS.