Star striker Bastian Schweinsteiger said Germany were looking forward to a classic game on Tuesday against Brazil, who won the 2002 World Cup final in the only previous clash between the pair at a major tournament. Schweinsteiger only wished it could have been the final. 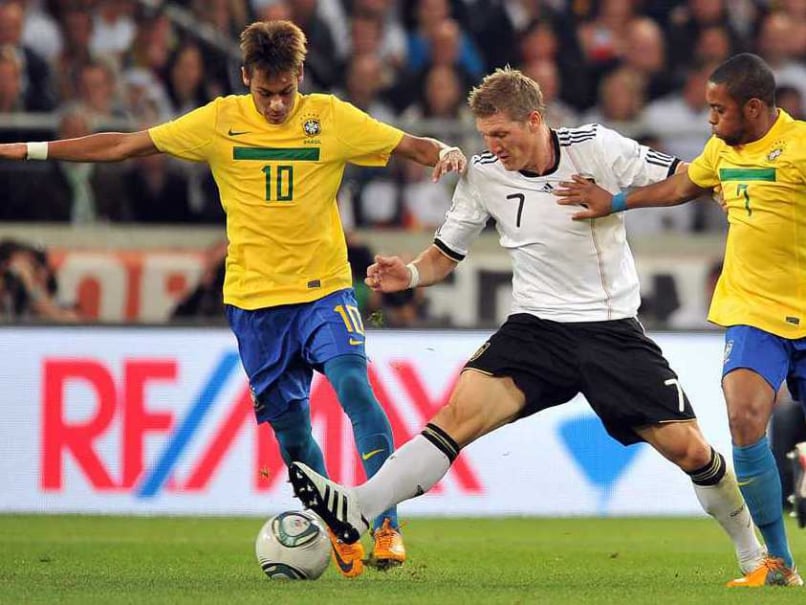 Neymar in action along with Bastian Schweinsteiger during a friendly match between Brazil and Germany in August 2011.© AP
Santo Andre, Brazil:

Germany's Bastian Schweinsteiger said on Sunday he was saddened Brazil's Neymar will not feature in their semi-final but believed the hosts may play above themselves with the whole nation behind them. (Watch: Neymar may take painkillers to play if Brazil reach final)

He added Germany were looking forward to a classic game on Tuesday against Brazil, who won the 2002 World Cup final in the only previous clash between the pair at a major tournament. Schweinsteiger only wished it could have been the final. (Also read: Hard dose of reality impinges on Brazil's fairytale victory)

"We're all feeling deeply saddened that he won't be able to play," the midfielder said of forwardNeymar, who was ruled out of the rest of the World Cup after suffering a back injury in Friday's 2-1 quarter-final win over Colombia.

"It's always best when the greatest players are on the pitch for the great matches. I think his team mates are going to rally around even more now with him out, and they'll want to win the World Cup for him. They'll derive strength from that."

Schweinsteiger, who has played an important role for his coach Joachim Loew as a leader on the pitch, said Brazil have plenty of great players but Germany are ready for the hosts.

"The mood on our team is very good and focused," he told a news conference near Germany's training camp on the Atlantic ocean in northeastern Brazil. "We want to win."

Brazil, Germany's first South American opponents at this World Cup, will be difficult to beat, he said. The Germans have won four of their matches and played out a 2-2 draw with Ghana.

"They've got two great coaches with Luiz Scolari and Carlos Alberto Parreira. Both of them have won the World Cup.

"I believe the team with the most intelligent coach will win the tournament. Plus Brazil also have home advantage. I think the biggest opponent will be the experience of their coaches."

Schweinsteiger, in his first news conference in Brazil, said he felt fit after overcoming injuries before the World Cup.

Loew had said on Friday he might not be fit enough to play lots of matches in a row, especially after the midfielder almost collapsed near the end of extra time in the 2-1 win against Algeria on Monday and had to be replaced.

"I'm feeling really good," he said. "I feel like I can now play at the highest possible level. I'm fit and ready to play more than 90 minutes if we have to - although I hope we'll be able to win the match in 90 minutes."

Schweinsteiger said his team were even stronger than the Germany side that finished third at the 2010 World Cup in South Africa after losing to Spain in the semi-final.

"We're a step further now," he said. "Not only is the Nationalmannschaft a step further but every player has developed further with their clubs. The number of really good players on the team is greater now than before. That's why we're better." A beaming Schweinsteiger also explained to reporters why he had avoided them until Sunday, which triggered speculation he was unhappy about being on the bench in the first two matches.

"I was just concentrating on getting fit and healthy again," he said. "I'm not a big fan of talking and beating around the bush. I'd rather talk about the pressing issues internally with the team.

"There was no malice," he said, referring to his avoiding the media. "At the start of the tournament I just wanted to focus a bit more on my fitness and getting over injury."