Brazil Is a Nation Humiliated and in Despair

Everyone knew it would be difficult for Brazil without the injured star Neymar and the suspended captain, Thiago Silva, but nobody imagined this feeble capitulation - four goals surrendered to Germany in six minutes during a 7-1 rout in a World Cup semifinal. 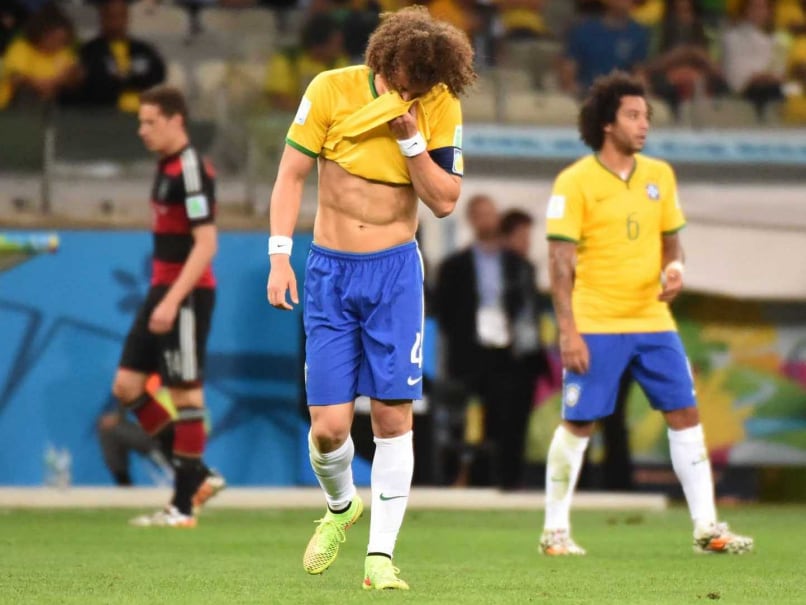 Daniel Pereira went to work on Tuesday because he could not bear to stay home and watch.

"We're nervous, but we have to control our emotions," Pereira, 33, a hotel clerk, said before the Brazil-Germany match kicked off 400 miles away in Belo Horizonte. (Brazil Thrashed by Germany)

"It will not be understandable," Pereira said when asked if Brazil would be forgiving in defeat. "They have to win. We are playing in our country, and they are fighting for our nation." (Brazil vs Germany a Rage on Twitter)

Everyone knew it would be difficult for Brazil without the injured star Neymar and the suspended captain, Thiago Silva, but nobody imagined this feeble capitulation - four goals surrendered to Germany in six minutes during a 7-1 rout in a World Cup semifinal. Early on, Brazil's players bickered, lost their cool, then lost their fight. The country of the beautiful game was left to face a grotesque humiliation. (David Luiz Apologises)

Luiz Felipe Scolari, the coach, flung his hands in disgust amid the flurry of early German goals. Marcelo, a defender, put his hands to his face in embarrassment and disbelief. A boy and a woman cried in the grandstand beneath their glasses, appearing stunned and overcome on camera.

No country is more closely associated with soccer than Brazil. None has won more World Cup titles than Brazil's five. None has so feverishly demanded style with victory. None could be more stricken by such total and bewildering defeat.

"We ask for forgiveness," Scolari said.

Everything was lost for Brazil on Tuesday, even the World Cup scoring record, once held by Ronaldo, now in the possession of Germany's Miroslav Klose, with 16 career goals.

Not since Ronaldo's unexplained malaise in the hours before a 3-0 loss to host France in the 1998 World Cup final - a panic attack? a seizure? - had Brazil encountered such baffling incapability.

It is one thing to be chastened on another continent, quite another to be shamed at home. Not that it is ever easy to win a World Cup on home soil. Ask Italy about 1990. Ask Germany about 2006. Yet Brazil faced a particularly fraught task - to win before a nation that widely questioned whether the World Cup was a waste of money, yet expected the Selecao to uphold their honor on the field.

Perhaps lifting a sixth World Cup trophy was always too much to ask amid the skepticism, the pressure, the scrutiny by a population of 200 million, every citizen a coach.

A reluctant Silva said he "asked God not to select me" to take penalty kicks in a second-round match against Chile.

Neymar cried during the national anthem before Brazil's opener against Croatia. Several players, including goalkeeper Julio Cesar, were left in tears in a shootout against Chile. Fairly or unfairly, some in Brazil took this to mean that the team was too emotional, unfocused, fearful, soft, fragile, weak.

Scolari told Brazilian reporters they could "go to hell" if they did not agree with his style of selecting his favorites to grant interviews. He also called in a sports psychologist before a quarterfinal match against Colombia.

Julio Cesar, the Brazilian goalkeeper, said players had every right to express their emotions, calling it a sign of their determination. And many surely found it poignant and appealing that the players showed themselves to be more complicated than headline heroes.

But Carlos Alberto, the captain of Brazil's 1970 World Cup champion, criticized the players, saying: "The team is crying when they're singing the anthem, when they get hurt, when they shoot penalties. Stop crying! Enough! They say it's the pressure from playing at home. But they should have been prepared for this."

All across the country, even in the remote Amazon village of Nova Belo Horizonte, which lacked electricity and attached its televisions to a diesel generator, fans suffered with the team. During a frustrating 0-0 tie with Mexico in group play, a parrot whose feathers sported Brazil's colors of green, yellow and blue began squawking at the villagers' nervous voices.

"Cheer for Brazil," a man yelled at the parrot, but no goals came that day. Nothing was ever as easy as many expected it to be.

Scolari was criticized for playing too defensively, not ornate enough in attack. Perhaps he did, but opponents are faster and more fit now. And they do not allow nearly as much languor on the ball as in the grainy-filmed days of Brazil's emergent glory.

Ultimately, Brazil was too dependent on one player, Neymar, for its scoring. And without its captain, Silva, the defense on Tuesday grew porous and helpless. Once Brazil fell behind, everything seemed to come apart at once, tactically and emotionally.

Germany was no less shocked than Brazil. In victory, coach Joachim Loew offered his condolences, as if at a funeral.

"All 200 million people here want you to get to the final," Loew said in a German television interview. "That can cause your players to tighten up."

As for his counterpart, Scolari, Loew said, "I feel sorry for him."

It might only get worse for Brazil. Its archrival, Argentina, will play in a semifinal Wednesday. If it defeats the Netherlands, it could win the World Cup Sunday at the Maracana stadium in Rio de Janeiro, the cathedral of Brazilian soccer.

But that is something to consider later. On Tuesday, the pain was raw and immediate. Even Dilma Rousseff, Brazil's president, felt it necessary to post her sadness on Twitter.

"I am immensely sorry for all of us," she wrote.

© 2014, The New York Times News Service
Comments
Topics mentioned in this article
FIFA World Cup 2014 Brazil Germany Football
Get the latest updates on ICC Women's Cricket World Cup 2022 and IPL 2022, check out the Schedule , Live Score and IPL Points Table. Like us on Facebook or follow us on Twitter for more sports updates. You can also download the NDTV Cricket app for Android or iOS.