At World Cup, Scoring on and off the Pitch 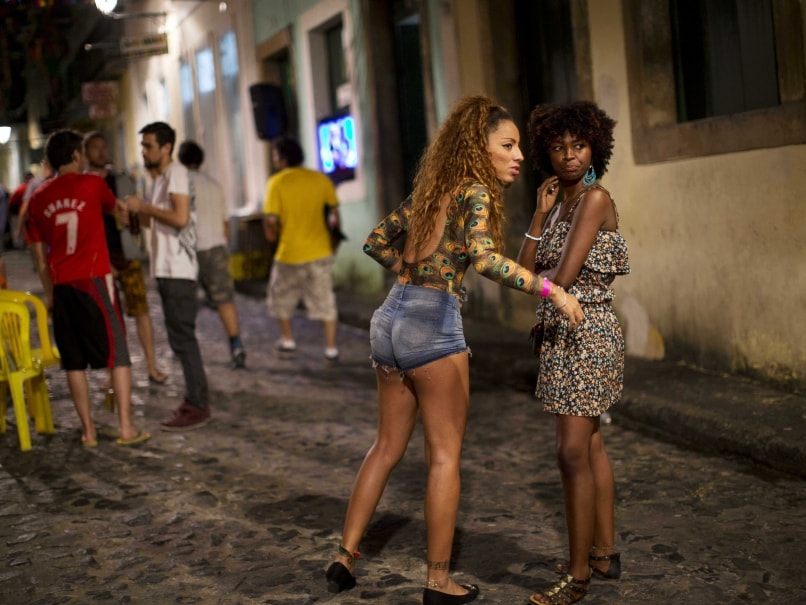 'The tanned and lovely girls from Ipanema' are the rage in town.© AP
Rio de Janeiro:

The World Cup is all about scoring, and that means on and off the pitch for fans celebrating each goal and romantic encounter in Brazil's party central, Rio de Janeiro.

When eyes aren't fixed on football stars Neymar or Lionel Messi on giant TV screens, they wander to the tanned and lovely girls from Ipanema, immortalized in a song, or their equally welcoming male counterparts.

Along the city's world famous tourist drag, Copacabana Beach, locals have been more than ready to pose for pictures with visitors looking to capture the moment for digital posterity. (A Bite of Fun? Luis Suarez Inspires Swedish Sex Toy)

"There are girls everywhere, they're pretty and easy going," grinned Marshal, 28, an Australian among the foreign fans mixing it up with Cariocas, as Rio residents are known, in Copacabana.

Alayde Pfeifer, a 38-year-old German woman, was impressed with the men. "It's great. I'm married, but in this atmosphere you do have to watch out for great-looking guys," she said.

While many locals welcome the party, some women are put off by the hordes of male tourists who mistake a nod for more than a wink and forget that Brazilians can be quite religious and conservative.

"Some tend to abuse our sense of contact and think anything goes," complained Ludmila D'Angeles, a 21-year-old student walking along Copacabana.

When night falls in the seaside tourist haunts of Copacabana, Lapa, Ipanema or Leblon, what starts as simple friendship can soon veer towards something a little more sensual. (Sex Workers Play Match on FIFA World Cup Sidelines)

On match days, Copacabana becomes a seething mass of humanity as supporters without match tickets cram the beachside FIFA "Fan Fest" where games are shown on a giant screen.

The site quickly is transformed into a night club under the stars as tanned, mainly youthful revelers gather, beer in hand, to groove to thumping music. (FIFA World Cup: Vital Stats)

Security personnel are on hand to keep order but the mass of bodies means some skin-to-skin contact is barely avoidable.

An informal "dress-code" of swimsuits and team colors only adds to the hedonistic spirit.

One young woman was clad in a tee-shirt bearing the seduction-friendly slogan in English: "No boyfriend = No problem."

"Brazilian women are sociable people," said 18-year-old Maira Ribeiro. "I have met tons of people and had flings with an Argentine, a Mexican and a Colombian."

Even so, some find it hard to discern the line demarcating friendliness and a green light for a one-night stand.

"Many tourists think it's easy to have a sexual relationship with Brazilian girls and tend to treat us like objects," said Andrea Holbert, a 36-year-old events manager.

"But even if people are pretty sexually liberal here, people have to understand that doesn't mean people will sleep with you the first evening."

In the central, bar-crammed, bohemian district of Lapa, Lavradio street and its numerous watering holes pull in tourists by the hundreds as well as Cariocas night after night.

Traffic regularly clogs the party district late at night. Flirting -- fueled by caipirinhas -- is rampant and couples emerge. "The atmosphere is extraordinary, it's not like in Belgium," said one Belgian fan, Christophe. "And there's not all that much prostitution."

But Rio can also live up to its Sin City reputation. One foreign journalist told AFP he had met a Brazilian who seemed ready for true romance.

After locking eyes, the duo chatted over a drink in Copacabana until the woman cut to the chase and suggested they head to a hotel, announcing the price of the room ... and her own.

Some who left their better half back in their homeland succumbed to temptation.

"I met a girl the other day and it's going really well," said a married 34-year-old Colombian man in Copacabana. "But don't go giving my name!"