At Rio's Beaches, Kicks Go Over the Net

In a country known for its passionate love for football, there is a lot of admiration for 'futevolei' as well - a sport in which players defy gravity as they leap in the air to play beach volleyball with their feet. 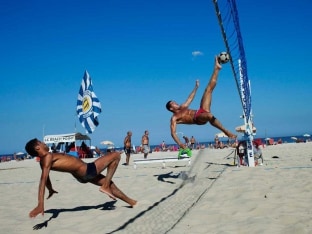 The most impressive move in Brazilian sports has nothing to do with soccer, takes place on sand and is known, delightfully, as the Shark Attack.

While most of the attention in this city will be on the World Cup during the next month, the fans walking the beaches here will also find themselves transfixed by a game in which players routinely throw themselves into the air, twist their bodies in all directions and raise their feet more than 6 feet off the ground. The sport is known as futevolei (pronounced foo-chee-volley), and its signature move is mesmerizing.

The game, which was born on the famed beaches of Copacabana in the 1960s, features a pair of competitors on each side of a net playing beach volleyball without the use of their hands. Creativity is king: Players use their feet, shoulders, chests, heads and anything else that would be legal on a soccer field to get the ball back over the net. A soft touch, powerful legs and sharp reflexes are critical.

So, too, is a certain amount of fearlessness, particularly for those who want to attempt the Shark Attack, a move created by Leo Tubarao - whose surname translates to "shark" - that is essentially futevolei's equivalent to volleyball's spike or tennis' overhead smash.

To pull off the move, a player has to leap high enough that he can get his leg above the net before powering the ball down with the bottom of his foot. Done right, it is nearly impossible to defend; done wrong, it can result in a crippling injury.

"I've seen people hanging in the net by their feet," said Leo Lindoso, a regular at games in Copacabana who also plays in top-level tournaments. "That does not feel good. You have to be careful."

Most players know not to try a Shark Attack unless they receive a perfect pass, Lindoso said. Most of the time, teams dink a shot just over the net or try to move their opposition in one direction before reversing the ball quickly the other way.

Leonardo Souza, a doorman in Botafogo who has been playing for 12 years, said he learned quickly that the Shark Attack was not for beginners.

"I hurt my back and had to go to therapy" after trying the move, shortly after learning to play, he said. Then he winced and said, "It was an important lesson."

Most players agreed that the most useful skill was control with one's chest. With such a large surface area to receive the ball, compared with the knee or instep, a player's chest is generally his most reliable tool for passing.

That can prove a bit more challenging for female players, said Aline Teixera, a doctor in Rio who tries to play in competitive matches several nights a week. Teixera said most women generally tried to receive the ball closer to their shoulders.

"You sort of bump your shoulder in when the ball comes," said Ana Paula Oliveira, a top female player who goes by the nickname Anina. "It takes practice."

Teixera, who often plays while her young children dig in the sand nearby, said she played until she was seven months pregnant - "I only stopped because my belly was too big and there was concern about the ball hitting it," she said - and then resumed playing eight weeks after giving birth.

"It would have been sooner, but I had a cesarean," she added.

The popularity of futevolei is growing steadily, and the game can now be found in countries such as Italy, Israel and Australia.

In the United States, there is the nascent Pro Footvolley Tour, although the sport is still trying to gain traction.

Within Brazil, futevolei games are hardly exclusive to Rio - many of the best players these days actually come from Brasilia - but even though the sport is well accepted, it is difficult for the best players to make a living.

Eduardo Alessandro Paiva, also known as Magrao, was one of Brazil's best players and competed internationally throughout the 2000s. He now works as a petroleum engineer and said he played only sporadically.

"The money is not good," he said. "Futevolei is a sport that opens doors - it doesn't make your life."

For most Brazilians, that is fine. Futevolei games typically spring up as the workday ends, and if one looks closely, it is often possible to see wads of rolled-up bills stuck into the sides of the nets. Betting on games is commonplace.

Romario, a former Brazilian soccer star who is now a politician, is a frequent futevolei player in his home neighborhood, Barra.

Romario smiled. "It keeps it interesting," he said.

Souza, the doorman from Botafogo, said he worked until 7 p.m. most days and then went to the beach to play. His games are typically for 50 100 Brazilian reals (about $22 to $44), with each match played to 18 points. Souza has seen matches with stakes ten times as high, although that is not his preferred level.

To him, as to many other players, futevolei is about the sand and the sweating and the opportunity, just maybe, to rise high and pull off a perfect Shark Attack.

At the very least, Teixera said, players know there will be action.

"I like football, but I prefer futevolei," she said. "Football can be kind of annoying. It's 45 minutes, and sometimes nothing happens. In futevolei, there is always something happening."