Argentina Withstands the Netherlands in a Shootout

Argentina beat Netherlands 4-2 in a penalty shootout to reach the final of the 2014 FIFA World Cup. For Argentina, Lionel Messi, Ezequiel Garay and Sergio Aguero confidently punched their shots into the net. The decisive attempt, by Maxi Rodriguez, was deflected, but it hit the underside of the crossbar and bounced into the net. 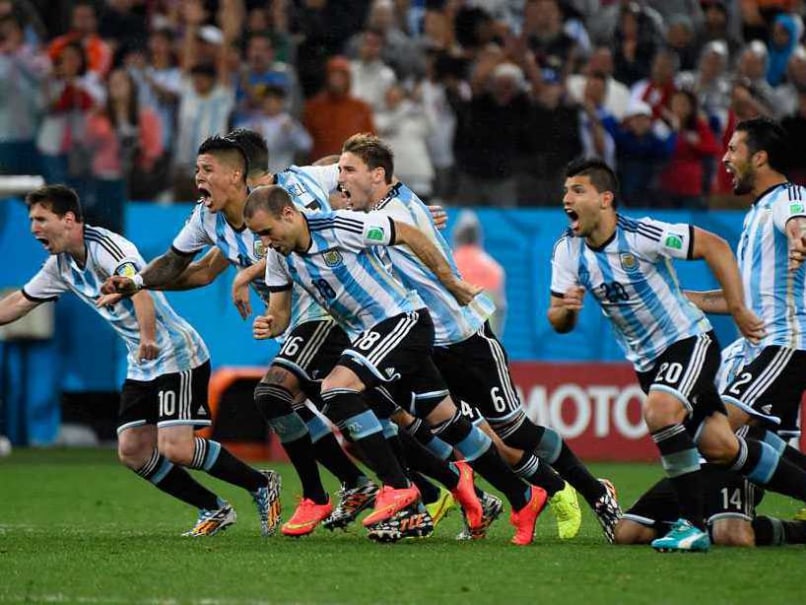 Regulation and overtime brought 120 minutes of scoreless exasperation in a World Cup semifinal on Wednesday that was by turns tense, cautious, clumsy, gripping and stubbornly unyielding.

There was little space to move, few chances to score. Sometimes the match was as dreary as the misty evening chill. If it possessed any beauty, it was not in gracefulness but in stark, struggling exertion.

And finally, when grind and strain and labor could not bring a resolution, whimsy and caprice did. Argentina defeated the Netherlands by 4-2 on penalty kicks and advanced to Sunday's final against Germany. (Highlights)

Sergio Romero, Argentina's goalkeeper, was poised in the shootout, unsettling the Dutch on the very first kick. He dived to his left, parried a shot by the defender Ron Vlaar and kissed his gloves. Later, Romero repelled a shot by Wesley Sneijder and pounded his chest. (Pics)

For Argentina, Lionel Messi, Ezequiel Garay and Sergio Aguero confidently punched their shots into the net. The decisive attempt, by Maxi Rodriguez, was deflected, but it hit the underside of the crossbar and bounced into the net. (Also read: Lionel Messi on target to match Maradona)

Messi took off in a jubilant, screaming run up the field as Argentina reached the championship game for the first time since 1990. (Also read: Germany have the edge in final, says Argentina boss)

That long ago night its opponent was West Germany, which even Diego Maradona could not find a way to beat. But that was forgotten on Wednesday as Argentine fans roared in delight and players removed their jerseys and twirled them in triumphant ecstasy.

"It's luck, that's the truth," Romero said of the penalty kicks. "You can dive and not make it, like their goalkeeper did. I had confidence, and thank God things turned out well."

The Netherlands led this World Cup with 12 goals, but its patient counterattacking style produced nothing in the quarterfinals and semifinals after a late, desperate victory against Mexico.

Twice, the Dutch were taken to penalty kicks. In Saturday's quarterfinal against Costa Rica, coach Louis van Gaal made a shrewd move, bringing on the reserve goalkeeper Tim Krul for the shootout. On Wednesday, though, van Gaal had already used his three substitutions, so he was forced to stay with Jasper Cillessen, who did not possess Krul's reach or effective reaction.

After a demoralizing 7-1 defeat to Germany in Tuesday's other semifinal, the people of Brazil received another blow on Wednesday when archrival Argentina advanced to the final instead.

Argentina won the World Cup in 1978 and 1986. Now it will seek a third title in, of all places, the Maracana stadium in Rio de Janeiro, Brazil's most famous and prized arena.

Throughout this tournament, fans of Brazil and Argentina have heckled each other through song, comparing the relative merits of their idols, Pele; and Maradona. Now, Argentina gets to sing on the world's biggest stage while Brazil must remain silent and seething.

"If Brazil cannot be champion, I don't want Argentina to be champion," said Edgard Custodio, 37, a Brazilian fan.

At 27, Messi will have a chance in his third World Cup to take home his sport's ultimate prize. And perhaps he will finally draw a full embrace by Argentine fans and an equal's comparison to the great Maradona, who won a World Cup in 1986.

Many in his home country have found Messi to be a remote figure, given that he left as a boy to begin his magnificent career at Barcelona. But he has been reliable and rescuing at this World Cup, scoring a late winner against Iran and making a critical pass to decide a second-round match against Switzerland.

He has been superb, scoring four goals and carrying his team through arid moments. Coach Alejandro Sabella has called him "our water in the desert."

Argentina reached the final in the most suffocating of matches. Perhaps Germany's victory on Tuesday took all the scoring oxygen out of the semifinals. Or maybe Brazil's humiliation was so shocking that Argentina and the Netherlands were left fumbling for artistry and inspiration. Not even Messi could find the net until the game went to a shootout.

The Netherlands gave him little room, hip-checking, grabbing and impeding him with a five-man back line, marking him with the enforcer Nigel de Jong in midfield. De Jong returned quicker than expected from a groin injury and, though he is most famous - or infamous - for a reckless kick to the chest of Spain's Xabi Alonso in the 2010 final, he was insistent in shadowing Messi on Wednesday.

In the 14th minute, a free kick by Messi found a gap in the wall, but Cillessen easily smothered the low, hard shot with his chest and hands.

Bruno Martins Indi, a Dutch defender, drew a yellow card in the 45th minute for repeatedly fouling Messi. He was replaced after halftime; van Gaal felt he could not risk another yellow and a suspension.

De Jong began to tire and limp and van Gaal made a second substitution in the 62nd minute, bringing on Jordy Clasie, who also tried to stick to Messi like an iron filing to a magnet.

In the 96th minute, the ineffective and depleted Robin van Persie, who had missed practice Tuesday with a stomach virus, was substituted for Klaas Jan Huntelaar. Against Mexico, Huntelaar had delivered the decisive goal. But his presence Wednesday meant that Krul would now be unavailable in goal if the game reached a shootout.

"I thought it was necessary to get van Persie out because he was on his last legs," van Gaal said.

A few minutes earlier, near the end of regulation, Arjen Robben, who had been so threatening against Costa Rica, slipped free into the penalty area. He might have scored the winning goal, but Javier Mascherano gave frantic chase and slid to block the shot and extend the match. Afterward, Mascherano cried in celebration and relief.

"It's grim going out this way," Robben said.

Brazil no doubt feels the same hollowness while Argentina and Messi play on.

Comments
Topics mentioned in this article
FIFA World Cup 2014 Lionel Messi Argentina Netherlands Football
Get the latest updates on ICC Women's Cricket World Cup 2022 and IPL 2022, check out the Schedule , Live Score and IPL Points Table. Like us on Facebook or follow us on Twitter for more sports updates. You can also download the NDTV Cricket app for Android or iOS.