Still agonizing over their traumatic 7-1 semi-final defeat to Germany just 24 hours earlier, Brazilians will now have to watch Argentina and their superstar Lionel Messi battle for the FIFA World Cup trophy in Rio de Janeiro's legendary Maracana Stadium on Sunday. 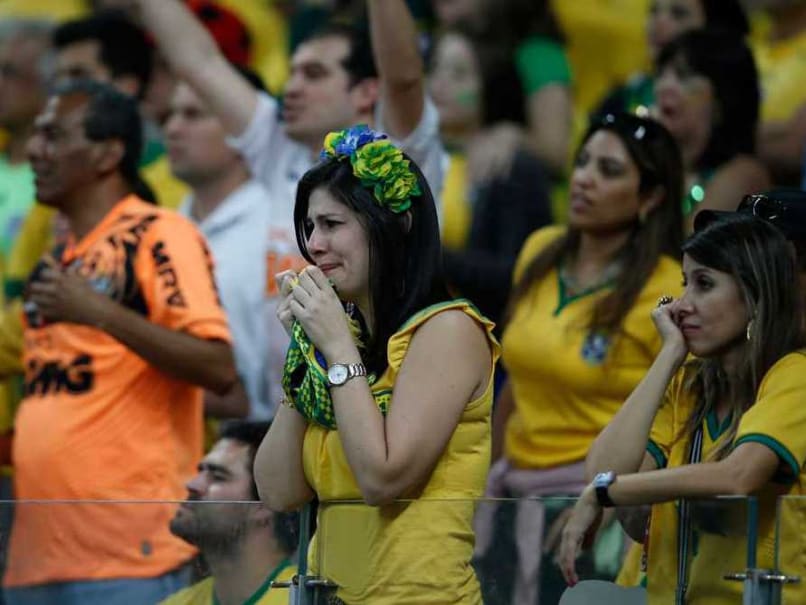 Brazilian fans react at the end of the semi-final football match between Brazil and Germany at The Mineirao Stadium in Belo Horizonte during the 2014 FIFA World Cup on July 8, 2014. Germany won 7-1.© AFP
Rio de Janeiro:

Brazilians might have thought that their World Cup nightmare couldn't possibly get any worse -- and then bitter rivals Argentina reached the final in their own backyard Wednesday. (Read: Nobody will die, says Luiz Felipe Scolari)

Still agonizing over their traumatic 7-1 semi-final defeat to Germany just 24 hours earlier, Brazilians will now have to watch Argentina and their superstar Lionel Messi battle for the trophy in Rio de Janeiro's legendary Maracana Stadium on Sunday. (Also read: German press swoon as Brazil are routed)

Many Brazilians rooted for the Netherlands to beat their South American neighbors in Wednesday's semi-final. But Argentina saw off the dogged Dutch 4-2 in a penalty shootout after a 0-0 draw in 120 minutes of attritional stalemate. (Also read: Germany rout worst day of my life, says Scolari)

"Seeing Argentina in the final in our home hurts, especially after the Selecao's worst ever defeat," said Marcio Carneiro da Silva, 36, a mailman drowning his sorrows with a beer on the terrace of a Rio de Janeiro restaurant. (Also read: Brazil is a nation humiliated and in despair)

Brazilians noted that the final will be in the same stadium where Brazil lost the decisive game of the 1950 tournament to Uruguay, a defeat that traumatized the country.

"In addition to not being able to dream about a sixth title, Brazilians will have to live with the real possibility of one of its main rivals triumphing in the ultimate football temple," it said.

The sports daily Lance used a Twitter hashtag for its title, #SomosTodosAlemanha! (We Are All Germany). Argentines responded on the social media website by repeatedly typing the number 7, reminding Brazilians of their humiliating defeat.

Argentines were on cloud nine, singing and chanting at the stadium in Sao Paulo and in bars across Brazil.

"Reaching the final in Brazil is the best thing that could happen to us, although I would have preferred to beat them in the final," said Miguel Martin, 32, a truck driver wearing a hat in Argentina's blue and white colors who watched the game at a public screening in Sao Paulo.

Brazil and Argentina have battled for football supremacy in South America for decades.

Throughout the World Cup, Argentine fans chanted in stadiums that football legend Diego Maradona was better than Brazilian great Pele.

But the competition goes beyond the pitch. Argentina was a leading emerging nation in the early 20th century but it was eclipsed by Brazil in economic and political might in recent decades.

At the official "Fan Fest" in Sao Paulo, some Brazilians wore the Dutch team's orange colors, applauding every time the Netherlands were close to scoring.

Now they have to cope with the possibility of President Dilma Rousseff handing the trophy to Argentine captain Messi.

"I can't imagine Dilma giving the trophy to Argentina at the Maracana. This can't happen," said Marcos Raimondi, a 44-year-old economist wearing the official Dutch team jersey. "It's worse than what happened yesterday. It's a nightmare. Unbearable."

"This is incredible. I feel the same sensation as yesterday. Since the fourth German goal I was already hoping that Argentina would not go through and that we would play them for third place."

But not all Brazilians were rooting against their South American peers.

Leonan Freitas, a 33-year-old bank worker, was the only one among a group of friends sipping beers at a Rio bar who cheered for Argentina.

"Argentina is a neighbor. I want South America to win," he said to his friends' disapproval. "I was more scared of losing the third-place game to Argentina."

Comments
Topics mentioned in this article
FIFA World Cup 2014 Brazil Argentina Football
Get the latest updates on ICC Women's Cricket World Cup 2022 and IPL 2022, check out the Schedule , Live Score and IPL Points Table. Like us on Facebook or follow us on Twitter for more sports updates. You can also download the NDTV Cricket app for Android or iOS.