The first 29 minutes of the first half when Germany scored five goals in the semifinal will be scrutinized for generations in Brazil, poked and prodded and dissected the way Brazil's dreaded defeat to Uruguay in the 1950 World Cup final has been. 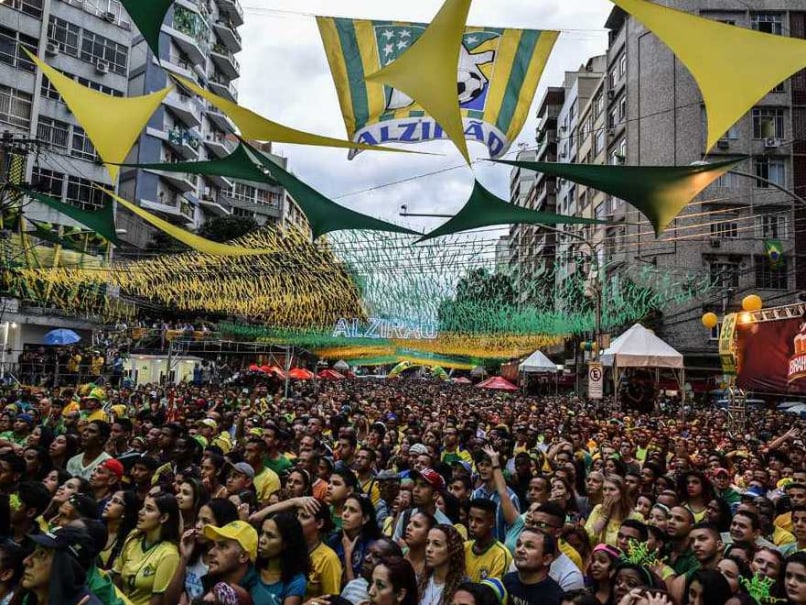 Brazil's fans react during a public viewing event at a street in Rio de Janeiro during the 2014 FIFA World Cup semifinal match Brazil vs Germany --being held at Mineirao Stadium in Belo Horizonte-- on July 8, 2014.© AFP
Belo Horizonte, Brazil:

Thomas Muller, Germany's top scorer at this World Cup, slyly slid around the back of Brazil's defense. When the ball arrived from a corner kick, he blasted it home. (Also read: German press swoon as Brazil are routed)

The Brazilian fans who made up most of the crowd of 58,000, went quiet for a moment. But then, unbowed, they resumed their defiant chants. (Also read: Germany rout worst day of my life, says Scolari)

In Ceilandia, some 450 miles north of the Estadio Mineirao, a house cleaner shrugged. (Also read: Brazil is a nation humiliated and in despair)

"After the first goal, our reaction was not too much of a shock because Germany is a strong competitor," said the housecleaner, Neide Moura de Brito do Nascimento, who watched the game on television with her family. "We already expected one or two goals from them."

Nothing else about Tuesday afternoon followed anyone's expectations. From that modest beginning, this country went on to witness something never seen before in World Cup soccer: Germany scored five goals - more than many teams scored in the entire tournament - in the first 29 minutes of a World Cup semifinal on the way to a 7-1 victory.

Those 29 minutes will be scrutinized for generations in Brazil, poked and prodded and dissected the way Brazil's dreaded defeat to Uruguay in the 1950 World Cup final has been.

Moacir Barbosa, the Brazilian goalkeeper for that infamous loss, said before he died in 2000 that ever since that game he felt like he spent the rest of his life in prison.

That cell just got more crowded. Every player in a yellow jersey Tuesday, many of them superstars, will likely be defined, and imprisoned, by those 29 minutes.

The game began with high hopes. When the music to the national anthem stopped after the required 90 seconds, the Brazilian fans continued singing with vigor, a rousing a cappella performance.

"I thought we were just 10 minutes in, we had the entire game ahead," said Gisleine Pedroli, a marketing student who watched at a friend's barbecue in Sao Paulo.

José Brito Lopes, who watched at the bar in a Rio de Janeiro favela where he works, was calm.

"When the first goal happened I thought this was normal, because Germany were playing well," he said.

Yet some already had that feeling of dread. The hairs on the neck. The lump in the stomach.

"Brazil cannot lose the focus, they have to concentrate," thought Susana Osako, a model who watched the game with her husband in Sao Paulo.

The Brazilian team seemed rattled and played on its heels for the next 12 minutes. It had not lost at home in a competitive game since 1975, well before anyone on the team was born.

The Germans swarmed, holding the ball and stroking it all around the field. Brazil made a few forays forward but never really threatened.

Then, Miroslav Klose's shot was parried by the goalkeeper Julio Cesar and Klose kicked in the rebound for his 16th career World Cup goal, the most in the tournament's history. 2-0.

This time, the stadium was more hushed. Two goals in 23 minutes was not necessarily a cause for panic, but it was distressing. A few tears could be seen on faces in the stands. The coarse language coming from some of the middle sections of the stadium needed no translation. Yet it was still early.

"There was still so much time left," said Glayson Muller Pereira Matos, 27, a taxi driver who also plays professional soccer in Brazil's lower divisions. "I still had hope."

It did not last much longer.

Only one minute later, Mesut Ozil of Germany crossed the ball into the middle of the field where Fernandinho, the Brazilian midfielder, watched it roll straight to Toni Kroos, who ripped it into the net. 3-0.

On the field, Julio Cesar threw up his hands. Fernandinho walked face-first into the net as if he were walking off a plank. Brazil's coach, Luiz Felipe Scolari, staggered from the field to take a seat on the bench.

At that moment, Rogerio Garces da Silva, a doorman outside Brasilia, said that "all the hope simply left my body." He had to get away from the TV, so he left his house and went for a walk "to calm my nerves."

Osako, the Sao Paulo model, was as certain that something was terribly wrong.

"This was not normal for us. The players were dumb cockroaches in the field," she said. "I realize that only a miracle could save us."

But no miracles would come Tuesday. It got worse.

Less than a minute after that crushing third goal, Kroos took the ball off Fernandinho's foot and made a savvy pass to Sami Khedira. Khedira gave it back to Kroos. He shot. It was impossible but true. 4-0.

"When the fourth goal went in," said Lopes, who watched in the crowded favela bar, "people started saying, 'I am ashamed to be Brazilian.'"

Luciano Machado, an engineer in Sao Paulo, was playing with his 5-month old daughter in front of the TV to distract himself.

Meanwhile, the doorman who had gone for a walk arrived at his sister's house to find her crying so hard that "we thought she would become ill."

"She was shaking!" Garces da Silva said. "We made her sip water. I've never seen sadness like it."

But the day was not over. Somehow, the impossible had become routine.

Three minutes later, in the game's 29th minute, the Brazil captain David Luiz cleared the ball straight up the middle to Mats Hummels. He split through a square of defenders and, moments later, Khedira rolled the ball into the net once more.

Marcelo, a star defender for Brazil, covered his face with his hands. But in the bleachers, grief had given way to something else, something stranger.

"We started to laugh with the situation," said Felipe Seligman, 30, who was wearing the same Brazil shorts and zip-up jacket that he wears every time Brazil plays. "We were saying, 'Oh my God, what's going on, what is happening? Is it real?'"

The fifth goal was when Machado forced himself to turn away from the screen. "I kept listening to the game, listening only because I could no longer watch it," he said.

Three goals in four minutes. Four goals in six minutes. Five goals in 29 minutes. One country that could not believe what had just happened.

"If I could explain what happened in those six minutes, I would answer," Scolari said. "But I do not know."

It was all so fast.

Lucas Rabelo spent the match working at a gas station in Brasilia. At one point, a customer entered the station's tiny market.

Germany's coach, Joachim Loew, said afterward that he could sympathize with the Brazilians because Germany also lost a semifinal as the host country when it was defeated by Italy in 2006.

The difference, of course, was that Germany lost that game in extra time, only giving up its first goal after 118 minutes. Brazil's dream of a final was over long before that; it did not even last for half an hour.