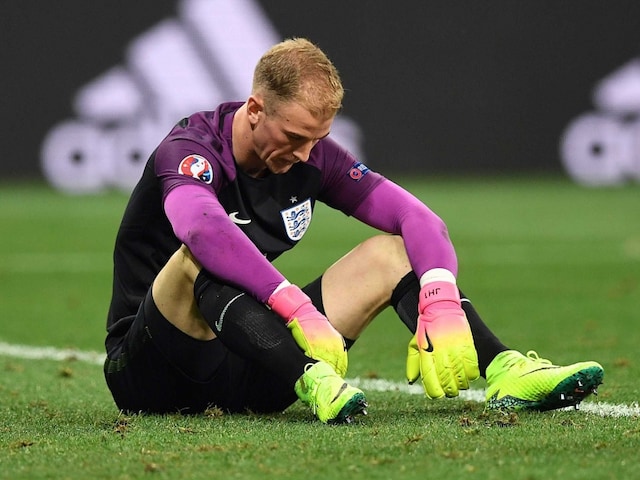 Goalkeeper Joe Hart said England "didn't perform" and deserve the criticism they will get after being knocked out of Euro 2016 by tiny Iceland in a huge shock on Monday.

And after coach Roy Hodgson resigned immediately after the defeat, Hart said the new boss, whoever it is, "has a tough job on his hands".

Hart, who let the second Icelandic goal in the 2-1 defeat squirm under his fingers, said: "As a group it is down to us. All the plans are put in place, we knew everything about Iceland but ultimately we didn't perform. Personally I didn't perform."

The Manchester City goalkeeper denied that his England teammates lacked the desire to beat a team ranked 34th in the world.

"It's not a question of wanting it, there's nothing we want more.

"We were in a good place but we haven't done it. We will get a lot of flak and we deserve it," Hart said.

"We will learn from this and try and bring English football back to where it belongs. We have put it in a low place.

"The next manager has a tough job on his hands. We worked hard but with no success. That is how this team will be remembered."

Striker Wayne Rooney insisted that despite the huge setback "the future is bright" for England because of the young players in the squad such as 18-year-old Marcus Rashford, who made a brief appearance as a substitute.

"As you can imagine, everyone's disappointed and gutted. It's a hard one to take," Rooney said.

"It's embarrassing for us. We know we're a better team. We're the ones on the pitch. You can't just say it's Roy Hodgson's fault or one player's fault. We're all in it together so we all have to share that responsibility.

"As players we appreciate what Roy has done for us. He's given a lot of players their debuts for England. You can't forget that. It's hard to see it now, but the future is bright."

Despite scoring a penalty and equalling David Beckham's England record of 115 international appearances for an outfield player, Rooney will have few happy memories of the night.

But the 30-year-old said he was determined to continue his international career.

"I'm interested and excited to see who the next manager is and if selected, I'm available to play."

Comments
Topics mentioned in this article
Iceland England Joe Hart Wayne Rooney Euro 2016 Football
Get the latest Cricket news, check out the India cricket schedule, Cricket live score . Like us on Facebook or follow us on Twitter for more sports updates. You can also download the NDTV Cricket app for Android or iOS.