An Antoine Griezmann brace proved to be enough as hosts France shocked world champions Germany 2-0 in Marseille to reach the final of Euro 2016. Germany dominated throughout the 90 minutes, but failed to get the ball into the back of the net to crash out of the tournament. Catch all the highlights of GER vs FRA semi-final here

Hosts France booked their place in the final of Euro 2016 on Thursday after a stunning 2-0 win over Germany in their semi-final clash in Marseille. Antoine Griezmann gave his side the lead from the penalty spot with the last kick of the first half, after Bastian Schweinsteiger handled the ball inside the German box. Griezmann then scored from close range in the 72nd minute after a defensive lapse from Germany, to seal the win for the hosts. France will now face Portugal in the title clash on Sunday. Get highlights of Germany vs France here. (SCORECARD | STATS | STREAMING INFO) 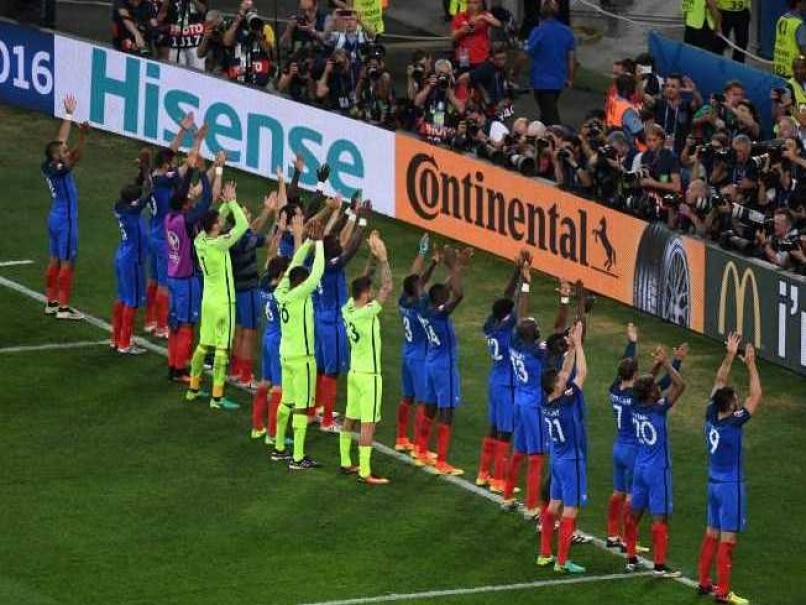 France's players celebrate with their fans after their semi-final win over Germany.

02:40 IST: That's all from us for tonight! See you again on Sunday for the title clash at Stade de France.

02:34 IST: It has been a difficult past few months for France, but Sunday could bring something special for a nation still recovering from a spate of terror attacks last November. Only Portugal stand in the way of France and the 2016 European Championship.

02:23 IST: And it's all over! France are through to the final of Euro 2016. The world champions have been sent packing!

02:20 IST: Griezmann is applauded off the field as he is replaced by Yohan Cabaye.

02:15 IST: Griezmann breaks for France and shoots from outside the box despite Pogba being free to his right. It goes straight into Neuer's hands.

02:10 IST: Germany waste another chance as Howedes' header from a Toni Kroos free-kick goes over the bar.

Everyone is glued to the action in Bordeaux! #EURO2016 #GERFRA pic.twitter.com/fiR9xTBjdh

02:07 IST: Leroy Sane replaces Schweinsteiger for Germany. He gets into the action immediately, and has a header deflected off for a corner. The resulting corner sees Mustafi shoot over the bar.

02:02 IST: Kimmich comes close for Germany. His curled shot from the right brushes off the post.

02:00 IST: GOAL! Antoine Griezmann scores from close range after a defensive mishap inside the German half. It's a mountain to climb for Germany now!

01:59 IST: Dimitri Payet is replaced by N'golo Kante for France.

01:51 IST: Koscielny leaps brilliantly to meet a Griezmann corner. His header, however, goes over the bar. Still 1-0 to France!

01:48 IST: Huge blow for Germany as Jerome Boateng limps off the field. Shkodran Mustafi replaces him.

01:46 IST: Germany are dominating possession, but France have looked more organised at the back now than in the first half. No clear-cut chances for the Germans in this half.

01:42 IST: The Germans are playing a high-line here as they continue to chase the game against the hosts.

01:39 IST: Julian Draxler is booked for a cynical tackle on Sissoko.

01:35 IST: France have made a very bright start to the second half. Germany struggling to get the ball away from their half.

01:33 IST: The second half gets underway in Marseille. 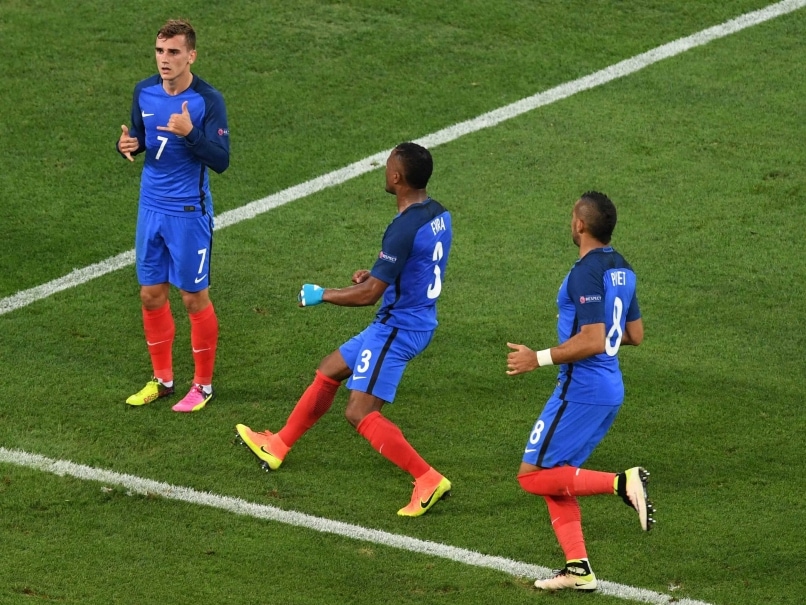 Antoine Griezmann celebrates after giving France the lead against Germany.

01:18 IST: And the referee blows the half-time whistle. The Germans go into the break trailing by a goal, having thoroughly dominated the first half.

01:17 IST: GOAL! Stade Velodrome erupts in joy as Antoine Griezmann gives France the lead from the spot-kick! 1-0 to the hosts!

01:16 IST: Penalty for France after Schweinsteiger handles the ball inside the box.

01:14 IST: Second yellow card of the game as Patrice Evra goes into the referee's book.

01:13 IST: Giroud is put through on goal after a defensive lapse from Germany, but Howedes recovers brilliantly to block the French striker's meek attempt.

01:10 IST: Schweinsteiger goes to the ground during a Germany corner. His calls for a penalty are correctly waved off by the referee.

01:06 IST: Emre Can is booked for bringing down Griezmann outside the box. 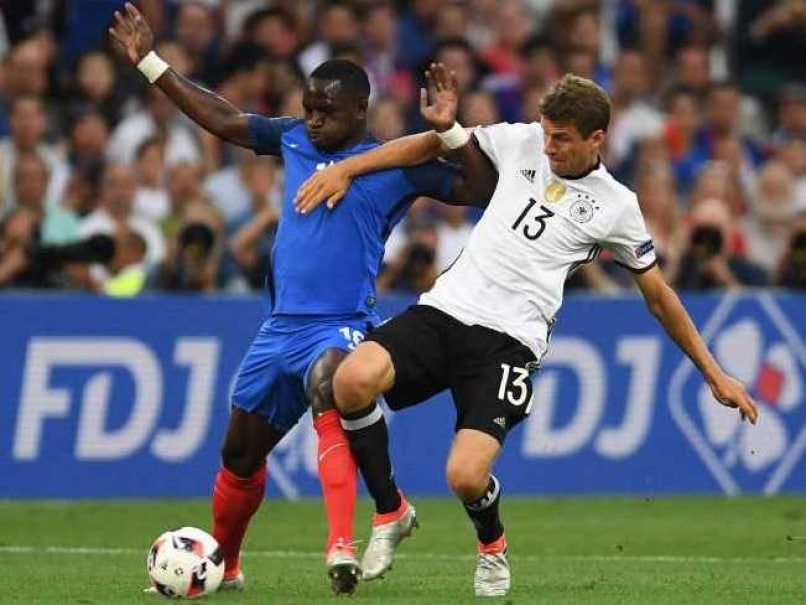 Germany are off to a bright start against France in Marseille.

01:02 IST: France are sitting deep here, as Germany create chance after chance. It's a one-way traffic in Marseille.

00:57 IST: Lloris has been forced into another save as Germany step up a gear in Marseille.

00:55 IST: Dimitri Payet earns a free-kick for France. His steps up to take the kick, but it is straight at Neuer.

00:52 IST: Joshua Kimmich has a shot blocked from just outside the box. Germany starting to assert themselves in the game.

00:49 IST: Germany have managed to slow things down a bit here after France's frantic start. The hosts are sitting deep with the world champions dominating possession.

00:46 IST: Now Muller shoots from distance. His shot is straight at Lloris. Quite a lively start we have had at the Stade Velodrome!

00:44 IST: Hugo Lloris dives to his right and brilliantly saves an Emre Can effort.

00:43 IST: After some patient build-up by Germany, the ball falls to Thomas Muller, who stretches to meet a cross from the right. His shot, however, is wayward.

00:42 IST: One of our own sporting heroes is staying awake for tonight's game.

00:40 IST: France have been clearly the brighter of the two teams so far. Germany trying to keep possession and slow down things.

0037 IST: Griezmann makes space for himself inside Germany's box, and shoots. Neuer parries it away.

00:33 IST: France with a couple of attacking forays into the German half,  but no sugar yet. The Germans have started the slower of the two sides.

00:30 IST: The Toni Kroos-Paul Pogba midfield battle will be an interesting one to watch out for tonight.

Will Kroos or Pogba lead their team to the #EURO2016 final?#GERFRA pic.twitter.com/EC9TOp2CBD

00:25 IST: The two teams are out into the pitch. Kickoff just five minutes away, after the national anthems. 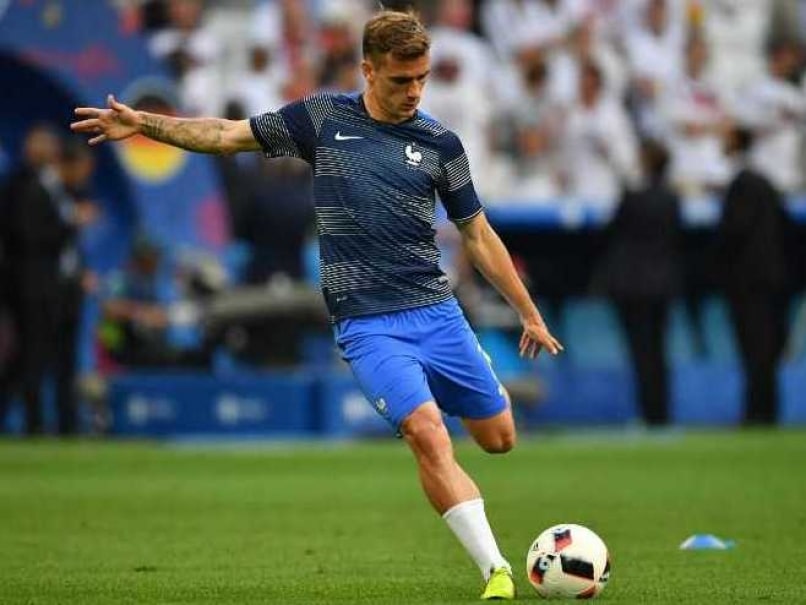 Antoine Griezmann will be the key man for France tonight.

00:12 IST: With Mario Gomez unavailable, Thomas Muller will lead the German attack tonight. The Bayern Munich star is yet to open his goal-scoring account at Euro 2016. Will he be able to end his drought tonight?

23:55 IST: Manuel Neuer has been in top form at Euro 2016, conceding just once so far in the five games. It took a penalty kick from Italy's Leonardo Bonucci to end his streak of clean sheets.

Manuel Neuer has conceded just once at #EURO2016. Can he keep #FRA out? pic.twitter.com/EittZESmcO

23:20 IST: The teamsheets are out, and Germany make three changes to their line-up. Schweinsteiger starts in Sami Khedira's absence, Julian Draxler replaces Mario Gomez and Emre Can starts in place of the suspended Mats Hummels.

22:40 IST: Bastian Schweinsteiger will create a new record for most appearances for Germany in major tournaments if he plays tonight.

Only Klose has appeared as many times for Germany in major competitions as Schweinsteiger (37). ?? #GER #EURO2016 pic.twitter.com/zc9jnOjhJs

22:15 IST: France haven't won a major title since Euro 2000. A difficult semi-final clash against the world champions awaits tonight, but the fans do look quite optimistic about their team's chances.

21:30 IST: The French attacking line has been in fine form in this tournament. Will Griezmann and co. be able to stop the German juggernaut tonight?

20:37 IST: German fans are pouring into Marseille ahead of the big game tonight.

19:57 IST: The hosts' fans have already announced the victory margin of France against Germany! Manuel Neuer and Co. would not be too happy to see it.

19:15 IST: Here's how the French fans are getting ready for Germany vs France semis 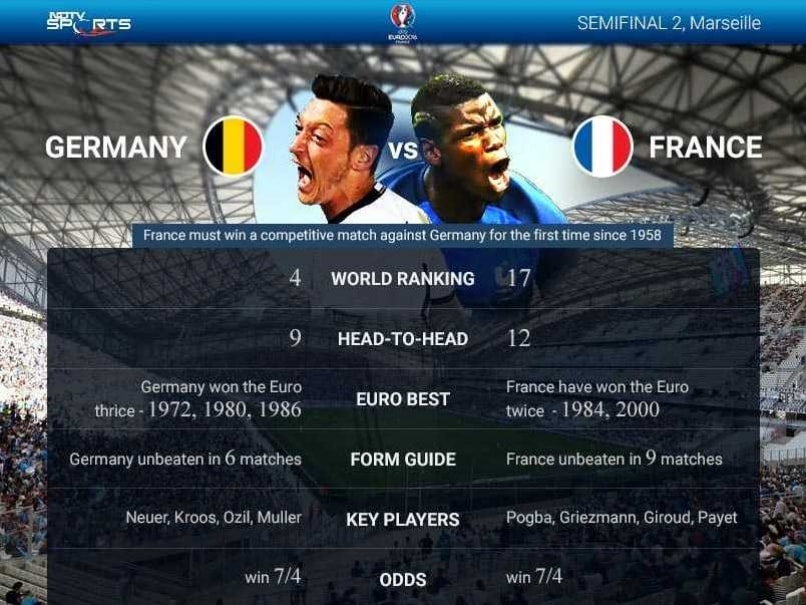 The winner of the match between Germany vs France will face Portugal in the finals of Euro 2016 on Sunday.

The French go into the semi-final against the world champions in Marseille as underdogs. Even though they have twice won the European championship, they have not beaten their German neighbours outside of friendlies since the 1958 World Cup.

Coach Didier Deschamps believes his players are ready to write a new page in the history of French football. The winners play Portugal in the final on Sunday. Portugal beat Wales in the first semi-final, riding goals from Cristiano Ronaldo and Nani.

Deschamps, who captained France to World Cup and European trophies in 1998 and 2000, said his side could not compete with Germany in terms of experience, caps and number of semi-finals or finals. But he said they had enough quality to win.

France did beat Germany 2-0 in a friendly last November on the night that Islamist militants struck in Paris, but captain Hugo Lloris said it would mean nothing on Thursday night.

Catch the latest updates and live score of Germany vs France here.

Comments
Topics mentioned in this article
France Germany Euro 2016 Football Football Live Score Live Blogs Mesut Özil Thomas Muller Dimitri Payet Paul Pogba
Get the latest updates on IPL 2020, check out the IPL Schedule for 2020 and Indian Premier League (IPL) Cricket live score . Like us on Facebook or follow us on Twitter for more sports updates. You can also download the NDTV Cricket app for Android or iOS.