Granit Xhaka and brother Taulant siblings are set to become the first brothers to play against each other in Euro finals, when Switzerland face Albania 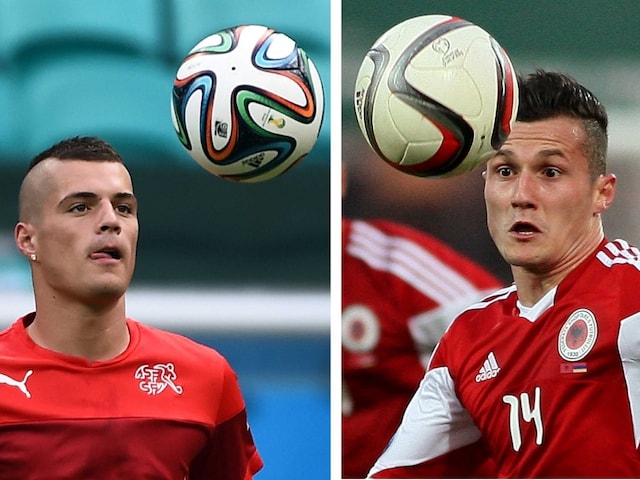 Granit Xhaka plays for Switzerland while his brother Taulant play for Albania.© AFP

European Championship history is set to be made on Saturday when Granit Xhaka plays for Switzerland against his brother Taulant Xhaka in Albania's colours.

The close siblings have been dreading facing off since the draw for Euro 2016 was made.

"It's a crappy feeling. That was the last thing we wanted," said new Arsenal star Granit, 23, who is 18 months younger than the brother he will have to face at Lens' Stade Bollaert-Delelis in their opening Group A match.

Granit, who joins the Gunners for the new season, has even joked the brothers have a pact to "leg it off the pitch after two minutes".

Taulant, 25, has a reputation as a midfield hardman and plies his trade with FC Basel. But said he will not "put him through the mill" when asked about facing his high-profile brother.

"Envy has never been a question with us," he added.

It promises to be a tense occasion for the Xhaka family who will face a quandary over who to support.

Four sets of brothers will play at Euro 2016 in Belgium's Romelu and Jordan Lukaku, Northern Ireland's Corry and Jonny Evans while Russia's Vasili and Aleksei Berezutski are the only twins.

But the Xhaka siblings are set to become the first brothers to play against each other in a European Championship finals.

"Anyone in a similar situation, who says it's not a special game, is a liar," said Granit.

"For the 90 minutes, we'll blend out the fact we're brothers as professionals. May the best man win."

Granit's rise to the Premier League stardom has been fast: two years with Basel, then four at Borussia Moenchengladbach before he signed for the Gunners in a deal reportedly worth 45 million euros ($50m).

In contrast, Taulant has spent his entire career at Basel, apart from a loan spell at Swiss league side Grasshopper.

Granit made his debut for Switzerland as an 18-year-old at Wembley in a 2-2 draw against England in 2011.

Taulant first appeared for Albania two years ago in a 1-0 win over Portugal, who did not have star scorer Cristiano Ronaldo.

The brothers could only have dreamed of facing each other in international football when they played as boys for local club FC Concordia in Basel.

Their parents Ragip and Eli fled Kosovo, in 1990 just before war ravished their homeland and they found a new home in the working-class neighbour of Basel's St Johann.

Ragip found work as a gardner, Eli as a cleaner.

Both their sons were soon chasing footballs on the local playing fields.

Although Taulant was the older, it was Granit who was given the house key to look after when they went off to play, because he was deemed more reliable by their mother.

Granit is a creator, using technique and skill to unlock defences, but was known for being a loud-mouth off the pitch.

Taulant prefered to draw less attention to his work, but gets stuck into the midfield dirty work.

"I'm not one to play to the gallery, not one for the spectacular," he said.

"I get the dirty work done."

But who will their parents support come kick-off on Sunday: Switzerland or Albania?

"That's very easy: one hand claps for Switzerland, the other for Albania," said Granit, diplomatically.

Comments
Topics mentioned in this article
Euro 2016 Albania Switzerland Granit Xhaka Taulant Xhaka Football
Get the latest Cricket news, check out the India cricket schedule, Cricket live score . Like us on Facebook or follow us on Twitter for more sports updates. You can also download the NDTV Cricket app for Android or iOS.