Euro 2016: We Were Outclassed by Germans, Admits Slovakia Coach

Jerome Boateng, Mario Gomez and Julian Draxler helped world champions Germany defeat Slovakia in the Round of 16 encounter in Lille 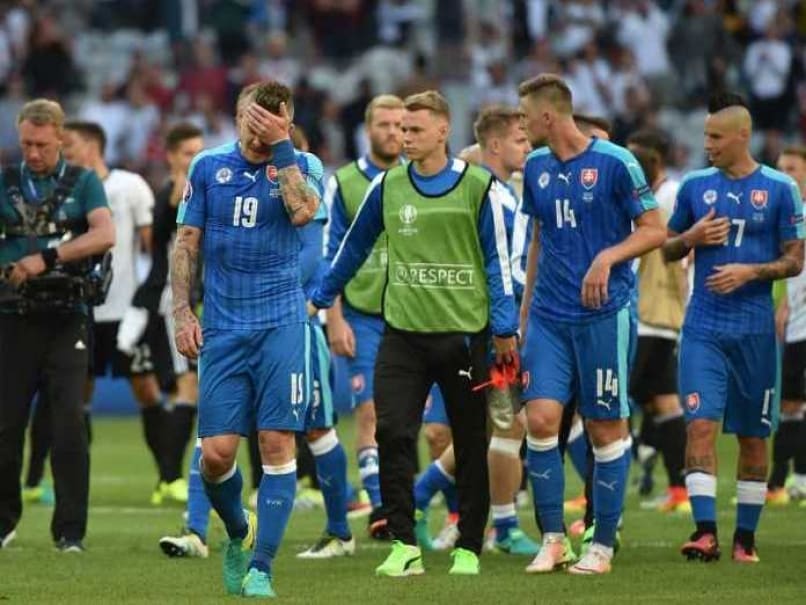 Slovakia's midfielder Juraj Kucka (left) reacts after the Euro 2016 round of 16 match against Germany at the Pierre-Mauroy stadium in Lille, on Sunday.© AFP

Slovakia coach Jan Kozak lamented the performance of his side as they were outclassed by Germany at Euro 2016 on Sunday, losing 3-0 to exit at the last-16 stage.

Kozak had made four changes to his team following the goalless draw with England last Monday that saw them qualify for the knockout phase but his side rarely threatened against the world champions and star man Marek Hamsik had little impact.

"I think several of our players didn't play to their best and when you have two or three players who are not really focused on the game and don't follow your instructions it's difficult to get anything from the game," he said before admitting that Slovakia had lost to a superior outfit in Lille.

"Germany perhaps started slowly in the group stage but they are a tournament team and they know when to play really well. It was a great collective performance from them," he added.

Slovakia were up against it as Jerome Boateng opened the scoring after just eight minutes of the last-16 encounter at the Stade Pierre-Mauroy.

Mesut Ozil missed a penalty soon after but Mario Gomez doubled the world champions' lead just before half-time and Julian Draxler completed the scoring in the second half.

Of conceding so early on, Kozak said: "The first goal was a consequence of the way the game had gone up to that point.

"We gave Germany too much space. They are very strong and sometimes it is difficult to play against such opposition.

"I think we played with a little bit of fear but they played with such focus and played so well."

Despite the disappointing result, Kozak insisted Slovakia's Euro campaign should be considered a success after they made it to the last 16 on their first appearance at the finals as an independent nation.

"Oviously any defeat is painful regardless of the opposition but I think there's a good feeling that we made the last 16 and played the world champions," said Kozak, whose team won 3-1 in Germany in a friendly just four weeks ago and beat Spain in qualifying.

"In one month we have played them twice, won one and lost one, so that's quite good.

"We played more important and more difficult matches in qualifying, against Spain for example, because without these matches we managed to win we wouldn't be here.

"This defeat hurts but we played very strong opposition. You can play your best but they are just too strong for you."

Slovakia will now move their focus to the qualifying campaign for the 2018 World Cup, in which they will come up against England, Scotland, Slovenia, Lithuania and Malta.

But it remains to be seen if the 62-year-old Kozak, and many of his senior players, will still be around, with the coach finishing his press conference on Sunday by saying: "Slovakia needs a change of generation."

Comments
Topics mentioned in this article
Slovakia Germany Jerome Boateng Mario Gomez Julian Draxler Marek Hamsik Euro 2016 Football
Get the latest updates on Olympics 2020, Olympics 2020 Medal Tally, Live Cricket Score . Like us on Facebook or follow us on Twitter for more sports updates. You can also download the NDTV Cricket app for Android or iOS.