Euro 2016: Virat Kohli Cheers For Germany Ahead Of Their Opening Encounter

Virat Kohli, who is not playing in the current series against Zimbabwe as he wants to take a break, has expressed his support for World Cup champions Germany ahead of their opening Euro 2016 match against Ukraine 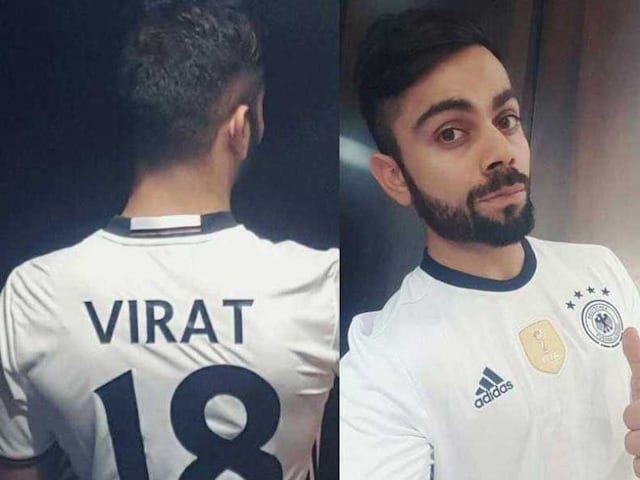 Football fever has gripped the whole world thanks to Euro 2016. Even cricketers are not immune to this phenomenon. Virat Kohli, who is currently taking a break and not playing the series in Zimbabwe, has stated his allegiance to his favorite team in this competition.

Excited for #Euro16
I'm all in with Die Mannschaft for the Euros! Which team are you supporting? #FirstNeverFollows pic.twitter.com/iAGbAE1r4N

Germany kick-off their 2016 Euro campaign against Ukraine at Stade Pierre-Mauroy in Lille on Sunday night. The World Cup champions are favorites to back up their World Cup success with Euro success and they will be hoping for a great start against an unpredictable Ukraine side.

Howzat! ?? Thanks for the support, @imVkohli. Any other celebrity #DieMannschaft fans out there? ?? #JederFuerJeden https://t.co/s0O7UZIJIV

To which, Kohli responded

Thanks @ToniKroos
Wish you the best for #Euro16. Will be cheering!

Kohli has been in prime form in the last one year across all formats. In the 2016 Indian Premier League, he smashed 973 runs and four centuries for Royal Challengers Bangalore as he took them into the final of the tournament. However, they lost to Sunrisers Hyderabad in their final clash by eight runs.

Comments
Topics mentioned in this article
Germany Euro 2016 Virat Kohli Toni Kroos Football Cricket
Get the latest Cricket news, check out the India cricket schedule, Cricket live score . Like us on Facebook or follow us on Twitter for more sports updates. You can also download the NDTV Cricket app for Android or iOS.