Euro 2016: Switzerland Eye Round of 16 Ahead of Romania Clash

Switzerland will be eyeing a spot in the round of 16 ahead of their Euro 2016 clash against Romania, who lost to France in their opening encounter 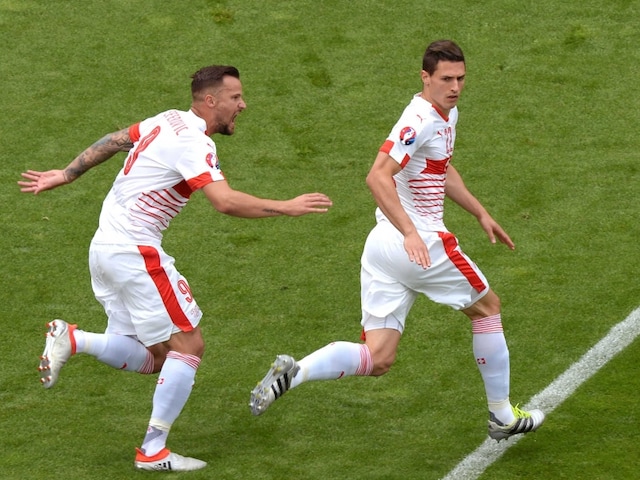 Fabien Schaer scored the winner for Switzerland in their opening round win against Albania.© AFP

Switzerland and new Arsenal signing Granit Xhaka go in hunt of a second victory in Euro 2016 on Wednesday against a Romania side fighting for survival.

The Swiss meanwhile had to fight before Fabien Schaer's forceful header secured a 1-0 win over 10-man Albania.

Schaer, the 1.86 metre (6ft 3in) Hoffenheim defender, makes a habit of scoring for the national side -- his decisive goal on Saturday was his sixth in 21 appearances.

Victory at Parc des Princes would almost certainly guarantee Switzerland a ticket for the round of 16 from Group A -- and they will not want to be facing France in Lille on Sunday after a defeat to the Romanians.

But Schaer said his teammates had taken note that coach Anghel Iordanescu's team were unlucky to lose to the French.

"We watched France against Romania, and Romania matched them for the majority of the game," he said.

"We know we'll have to up our game to beat them."

Goalkeeper Yann Sommer urged his teammates to throw caution to the wind. "One point will not be enough for us to qualify," he said.

Romania's Nicolae Stanciu said although his team have fewer players in Europe's top leagues, they were a match for the Swiss.

"I think we are at the same level," the talented Steaua Bucharest midfielder said.

Stanciu, 23, said after the France game that he was getting tired of comparisons with legendary Romanian midfielder Gheorge Hagi, who graced both Real Madrid and Barcelona in the 1990s, and the controversial Adrian Mutu, once of Chelsea.

"They will remain unique and it will take time to achieve what they achieved," he said.

The Romanians received glowing praise from their usually critical national press for their performance against France and the atmosphere in the camp is relaxed after they enjoyed a barbecue with their families in the team hotel on Monday.

Comments
Topics mentioned in this article
Switzerland Romania France Euro 2016 Football
Get the latest updates on IPL 2020, check out the IPL Schedule for 2020 and Indian Premier League (IPL) Cricket live score . Like us on Facebook or follow us on Twitter for more sports updates. You can also download the NDTV Cricket app for Android or iOS.