Written by Agence-France Presse
Read Time : 4-min
Portugal's football players listen to the national anthem on the balcony of the Belem Palace as they celebrate their Euro 2016 victory after returning home. © AFP
Lisbon:

After a night of rowdy celebrations Portugal's European champions led by Cristiano Ronaldo returned home to a heroes' welcome on Monday and a country overjoyed by their upset win over France in the Euro 2016 final.

Tens of thousands of fans took over the streets of Lisbon waving red and green national flags to mark the historic victory set up by substitute Eder's extra-time goal that stunned the host country on Sunday night in the final of Euro 2016.

Real Madrid superstar Ronaldo, who was stretchered off injured and crying early in the game, hugged the trophy on the special flight that took the Portuguese team home.

Two fire trucks sprayed jets of water in green and red over the plane as it taxied to the airport terminal.

Ronaldo and coach Fernando Santos were first to emerge with the trophy. Man-of-the-match defender Pepe carried the prize down the steps, where the 23-man squad boarded an open-top bus to start a victory parade.

After meeting President Marcelo Rebelo de Sousa, the 23-man squad were to go on a tour of the capital.

An open-top bus planned for a Paris victory parade was sent back to the depot as French football chiefs started a what-went-wrong inquiry.

Star midfielder Paul Pogba wore gold-framed glasses as he waited in the courtyard of the Elysee palace. Defender Lucas Digne blew bubbles with his chewing gum as he waited.

Neither country could barely believe the result. 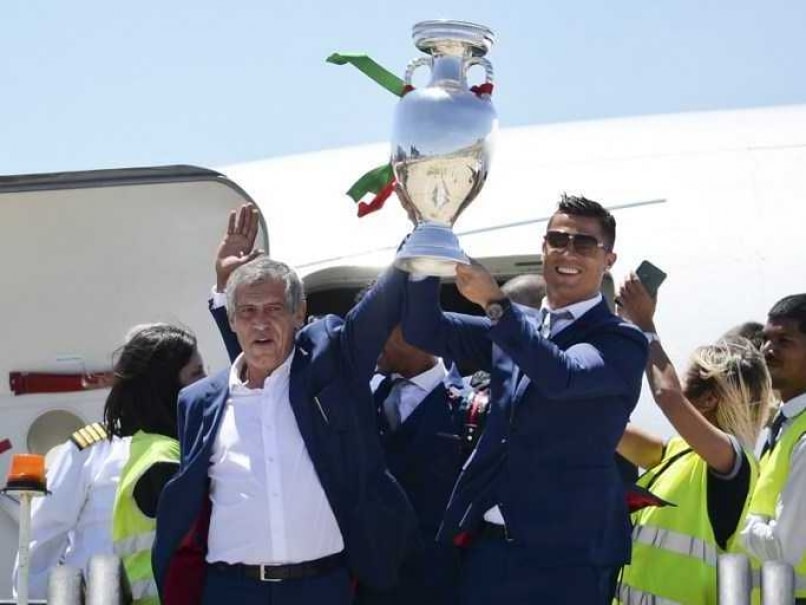 Cristiano Ronaldo and Portugal coach Fernando Santos were first to emerge with the Henri Delaunay Trophy on arrival at Lisbon airport.

Portugal's dreams of lifting the Henri Delaunay Trophy looked to have taken a shattering blow when Ronaldo, their captain and talisman, fell to the ground in agony in the eighth minute following a clattering challenge from Dimitri Payet.

After twice going off for treatment and trying to come back, Ronaldo was definitively carried off, covering his face as the tears welled up.

But for all France's dominance Portugal stood firm thanks to Pepe and a string of dramatic saves from goalkeeper Rui Patricio.

"It was not the final I wanted but I am very happy. It is a trophy for all Portuguese, for all immigrants, all the people who believed in us, so I am very happy and very proud," Ronaldo said.

The victory marks a healing of sorts for Portugal after their shock defeat in the Euro 2004 final when they lost 1-0 to unfancied Greece on home turf.

Luis Figo, who captained Portugal in that agonising defeat in Lisbon 12 years ago, congratulated the team on Twitter.

Portugal's sports press hailed the team with headlines including "Epic", "Eternal" and "Pride of Portugal".

Portugal's coach Santos and the other players paid tribute to Ronaldo's role in urging the team not to give up.

Ronaldo returned from treatment, his knee heavily strapped and limping, at the end of 90 minutes to give pep talks to his team-mates -- earning ridicule on Twitter from observers, who said he was trying to be the coach.

Eder, who plays for French side Lille and only went on in the 79th minute, was having none of it: "He told me I was going to score the winning goal. He gave me strength and positive energy."

Tears of pain and joy

Ronaldo's tears of pain and anguish as he was carried off turned to tears of joy at the final whistle.

Shrugging off his injured knee, the forward danced past reporters with other Portugal players as they left the stadium.

Portugal defended doggedly and threatened occasionally without their inspirational skipper. With 109 minutes gone, Eder beat off a Laurent Koscielny challenge to fire a shot from outside the penalty area that French captain and goalkeeper Hugo Lloris could not get a hand to.

The tournament, expanded to 24 teams for the first time, produced a few memorable upsets but little in the way of classic football. And Lloris was the latest to raise questions about the manner of Portugal's wins.

But he described France's luck as "cruel" and added "one can always argue about the way they play, but they are efficient and you must congratulate them".

France started the match as strong favourites after beating Germany 2-0 in the semi-final. Antoine Griezmann scored twice in that game to take his tournament tally to six -- enough to win the Golden Boot award.

The country had been looking for a win as part of what Hollande called the healing process after the November 13 attacks in Paris that left 130 dead.

"The disappointment is there and it's immense," French coach Didier Deschamps said after the game. "We've let a big chance to be champions pass us by."

France spent 450 million euros (USD 500 million) preparing 10 stadiums for Euro 2016, which could be the last hosted in one country. Euro 2020, the 16th tournament, will be held in 13 cities in 13 different countries from Azerbaijan to Wales.