Eder, who scored Portugal's winning goal against France in the Euro 2016 final, said Cristiano Ronaldo had told him that he would score the all-important winner 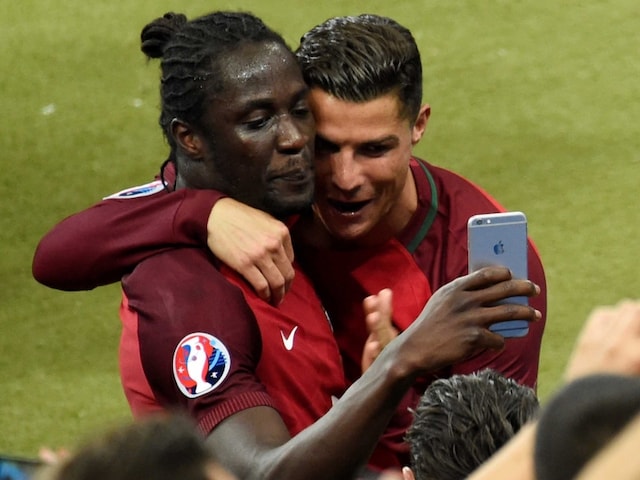 Eder with Cristiano Ronaldo after Portugal defeated France to win the Euro 2016.© AFP

Cristiano Ronaldo predicted Portugal's Euro 2016 hero Eder would score the winning goal in their 1-0 extra-time triumph over France and gave him the encouragement to settle Sunday's final.

Eder came on in the 79th minute and, having played only 13 minutes at the tournament before his introduction, struck the winner with a venomous long-range strike in the 109th minute.

Portugal were outsiders to win the final and were dealt a significant blow early on when their talismanic captain Ronaldo had to be replaced through injury in the 25th minute.

Eder, who plays for French side Lille, said his captain's words had inspired him to make the decisive contribution.

"(Ronaldo) told me I would score the winning goal for the team," the striker told O Jogo. "He gave me this strength, this energy and it was vital.

"It was a goal I've been working for from the first minute of the Euros.

"For all the work we did, for all of the Portuguese, it's fantastic," he added. "It's well deserved and we should all be congratulated."

France had better chances in regular time but were unable to capitalise on their superiority despite Ronaldo's exit.

Portugal coach Fernando Santos brought on Eder for Renato Sanches and he broke the deadlock in the extra period after muscling his way past defender Laurent Koscielny before firing a low right-foot shot into the corner of Hugo Lloris's goal.

"The disappointment is immense," his club Lille wrote on their official Twitter account, "but there is considerable pride to be able to count such an attacker in our ranks."

Eder's winner gave Portugal their first major title and ended a run of 10 straight defeats by France since 1975.

Comments
Topics mentioned in this article
Euro 2016 Portugal Cristiano Ronaldo Football
Get the latest Cricket news, check out the India cricket schedule, Cricket live score . Like us on Facebook or follow us on Twitter for more sports updates. You can also download the NDTV Cricket app for Android or iOS.