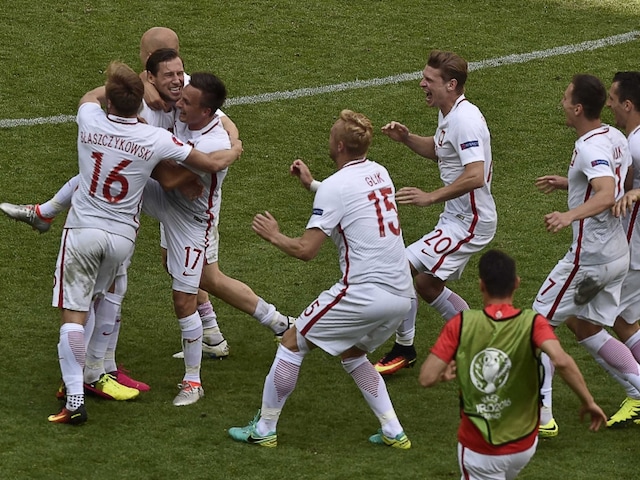 Poland entered the quarter-final of the 2016 Euro championships after beating Switzerland 5-4 on penalties.© AFP

Poland reached the quarter-finals of Euro 2016 after beating Switzerland 5-4 in a penalty shoot-out on Saturday as Jakub Blaszczykowski proved again he has the midas touch.

It finished 1-1 after normal time, and then extra time, at Saint-Etienne's Stade Geoffrey Guichard.

Arsenal-bound Granit Xhaka was at fault as his wild kick flew wide with the Swiss' second effort as Poland nailed all five kicks.

The result meant Poland preserve their record of never having lost in 18 games when Blaszczykowski has scored.

The Poles will now play either Portugal or Croatia in a quarter-final in Marseille on Thursday.

It was a historic occasion for both sides as neither had ever even reached the knockout stages of a Euro finals.

But despite his success in converting in the penalty shootout, Robert Lewandowski, the top scorer in qualifying with 13 goals, remains without a regular goal in France.

However the Bayern Munich striker constantly dropped back into midfield to run Poland's attack.

The Poles dominated the first half, while the Swiss ruled the second.

Poland squandered a gold-plated chance in the opening minute as a lazy pass from Swiss full-back Johan Djourou fell into Lewandowski's path.

The star striker enticed Swiss goalkeeper Yann Sommer off his line, but Arkadiusz Milik fired over with the goal at his mercy.

At the other end, Blerim Dzemaili, then Admir Mehmedi had chances for the Swiss before Fabian Schaer headed straight at Lukasz Fabianski.

After creating their fair share of chances, Poland finally went ahead when Kamil Grosicki broke down the left from a Swiss corner.

His pass found Blaszczykowski unmarked at the far post and the Borussia Dortmund winger drove his shot home on 39 minutes.

The Swiss grabbed the game by the scruff of the neck as they hunted a second-half equaliser.

They camped in the Poland half for long spells with the Poles' goalkeeper Lukasz Fabianski under siege.

Chasing the game and in a bid to boost their attacking options, Swiss coach Vladimir Petkovic switched to two strikers for the last 30 minutes.

He put Breel Embolo on for attacking midfielder Blerim Dzemaili and the move paid off.

A free-kick by Swiss dead-ball expert Ricardo Rodriguez was heading for the top right-hand corner until Fabianski's glove intervened with 15 minutes left.

Swiss striker Haris Seferovic had his head in his hands when his shot hit the crossbar.

But Shaqiri's brilliant left-footed effort, just inside the post in the 82nd minute, gave Fabianski no chance, as the Swiss drew level.

When extra-time started, Swiss substitute Eren Derdiyok, who was playing in attack alongside Shaqiri twice tested Fabianski as the Nati chased a winner.

Comments
Topics mentioned in this article
Granit Xhaka Jakub Blaszczykowski Xherdan Shaqiri Poland Switzerland Euro 2016 Football
Get the latest Cricket news, check out the India cricket schedule, Cricket live score . Like us on Facebook or follow us on Twitter for more sports updates. You can also download the NDTV Cricket app for Android or iOS.