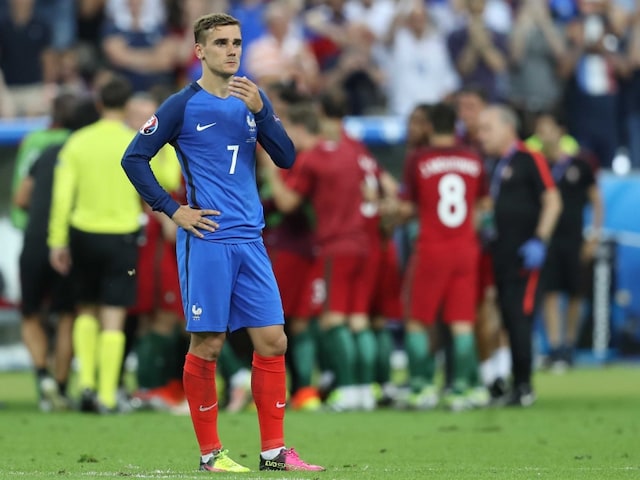 Antoine Griezmann reacts after France's loss to Portugal in the Euro 2016 final.© AFP

Losing a final to Cristiano Ronaldo has become an unfortunate habit for Antoine Griezmann and he is not happy about it.

The France forward missed a penalty for Atletico Madrid in the Champions League final in May and his team went on to lose on penalties to city rivals Real with Ronaldo sealing the shootout win.

"I've just lost my second final in just over a month and it sucks," Griezmann told reporters after Les Bleus lost 1-0 in extra-time to Ronaldo's Portugal in the European Championship final on Sunday.

Griezmann's usual boyish looks were on display as ever but not the smile that normally goes with them when he collected his trophy for the top scorer in the tournament.

The speedy 25-year-old netted six goals in the finals -- more than any player at one European Championship since Michel Platini hit nine in France's 1984-winning campaign on home soil.

"We came close, really close," said Griezmann, who has reached a totally new dimension this season, prompting Atletico coach Diego Simeone to say his disciplined and hard-working forward was among the top three players in the world.

"Portugal did not create many chances but they were smart," he added.

"It's frustrating. I'm proud of our group and of what we have achieved but this was simply not our night."

France coach Didier Deschamps, who helped Griezmann shine at the tournament by moving him closer to Olivier Giroud up front, offered sympathy.

"Antoine is a great player and we owe him a lot," Deschamps said.

"Maybe he was not clinical or fresh enough tonight but I can't reproach him and there will be better days for him, I'm sure".

Comments
Topics mentioned in this article
Cristiano Ronaldo Portugal France Euro 2016 Antoine Griezmann Football
Get the latest updates on IPL 2020, check out the IPL Schedule for 2020 and Indian Premier League (IPL) Cricket live score . Like us on Facebook or follow us on Twitter for more sports updates. You can also download the NDTV Cricket app for Android or iOS.