Midfielder Daniele de Rossi came off injured during the clash against Spain, while teammate Thiago Motta picked up a booking to be suspended from the Germany game 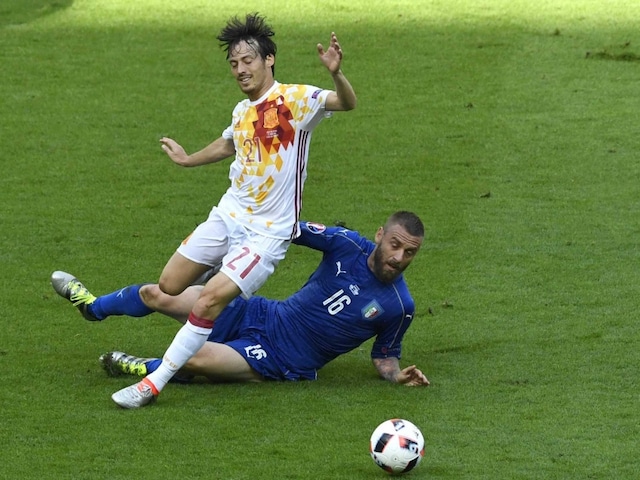 De Rossi picked up a hip injury on Monday, and is unlikely to recover in time for the Germany clash.© AFP

Italy are facing a serious selection headache in midfield ahead of their Euro 2016 quarter-final against Germany after Daniele De Rossi came off hurt in Monday's win over Spain and Thiago Motta incurred a suspension.

Roma midfielder De Rossi came off early in the second half of the game at the Stade de France, which Italy won 2-0 thanks to goals by Giorgio Chiellini and Graziano Pelle.

He was replaced by Thiago Motta, but the Paris Saint-Germain player was booked and will now serve a one-game suspension, ruling him out of the clash with the world champions in Bordeaux next weekend.

"Motta is suspended and that will penalise us because De Rossi has hurt his hip. We have already lost Candreva," said Italy coach Antonio Conte after Monday's match.

"We will look at De Rossi in the coming hours but I can't say yet what chances he has of recovering.

"We are playing on Saturday so we have four days to recuperate. I want my players to be at 100 percent for the game because they will have to play at 120, 130 or 140 percent to beat Germany."

"There are a lot of hurdles in our way but we know when the going gets tough we respond well."

Antonio Candreva has missed Italy's last two games due to a groin problem.

Comments
Topics mentioned in this article
Euro 2016 Italy Daniele De Rossi Thiago Motta Germany Spain Football
Get the latest Cricket news, check out the India cricket schedule, Cricket live score . Like us on Facebook or follow us on Twitter for more sports updates. You can also download the NDTV Cricket app for Android or iOS.