Euro 2016: It is Now or Never For Albania And Romania

Romania enters the match in Lyon in third place in Group A with one point while Albania has zero. France is already through to the knockout rounds with six and Switzerland have four before the group's top two teams also play on Sunday. 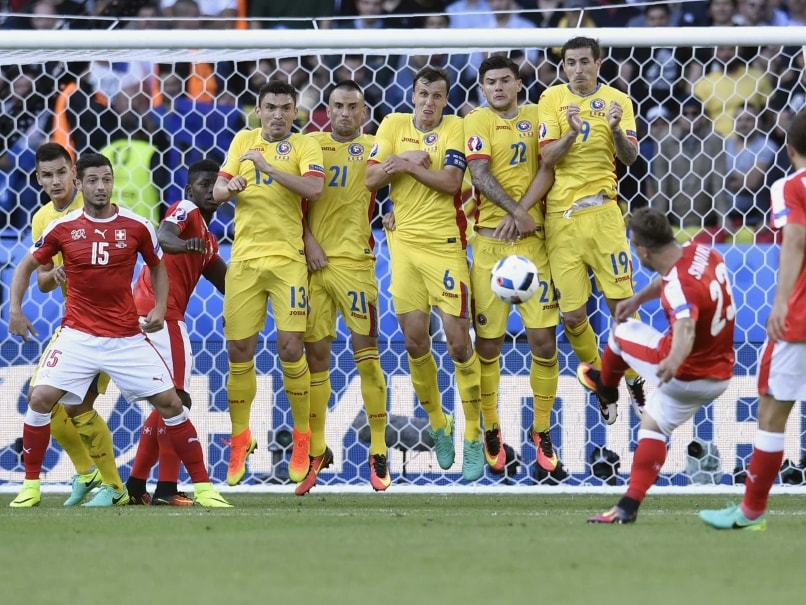 Romanian players defend against a free-kick from Switzerland's midfielder Xherdan Shaqiri during their Euro 2016 Group A match.© AFP

The winner keeps its hopes alive. The loser heads for an early exit.

Albania and Romania, two gutsy sides that have endured heartbreaking last-minute losses to France, will meet Sunday in a match that will send at least one of them out of the European Championship.

Romania enters the match in Lyon in third place in Group A with one point,while Albania has zero. France is already through to the knockout rounds with six points, and Switzerland has four points before the group's top two teams also play on Sunday.

Romania can aspire to a win over Albania which, combined with a Switzerland loss to France, would give it second place and a berth in the round-of-16 if it also surpasses the Swiss on goal difference or goals scored.

But without some help, Romania will be in the same situation as Albania: clinging to the chance of finishing among the top four third-place teams of the six groups. That would be good enough to send them through in the expanded tournament of 24 teams.

It means that Albania and Romania, teams built on a strong defense, will have to consider a more attacking approach than in their first two matches, when grit and effort abounded, but goals were sorely lacking.

"It's a matter of life or death as a draw won't help either of us," Romania forward Florin Andone said Friday. "It will be a tough match. Look at how hard they fought in the two matches they've lost, look at how well they played. We have to get it into our heads that we have to give it our all and play a good game with no mistakes."

Bogdan Stancu has scored Romania's only two goals. But both came from the penalty spot after rash fouls by defenders; first in a 2-1 loss to France, and then in a 1-1 draw with Switzerland that Romania led until the second half.

Albania has yet to find the net, but coach Giovanni De Biasi, who turned 60 on Thursday, is right to be proud of how the tournament debutante has fared so far.

Already down an early goal, Albania held firm after being reduced to 10 men before halftime and kept intact its chances of equalizing in a 1-0 loss to Switzerland.

Albania then pushed title contender France to the 90th minute before conceding twice to the competition's hosts in a deflating 2-0 loss.

On Sunday, it will be strengthened by the return of captain Lorik Cana, who was sent off after two bookings against Switzerland.

Romania coach Anghel Iordanescu has doubts about the fitness of midfielder Mihai Pintilii and defender Razvan Rat, but he can look to Romania's undefeated record against Albania in eight competitive encounters.

"We want to stay here but the point won (against Switerland) will be worth nothing if we do not beat Albania," Romania midfielder Andrei Prepelita said. "We are totally focused and will do everything to qualify."

Comments
Topics mentioned in this article
Albania Romania Euro 2016 Football
Get the latest updates on IPL Auction 2023 and check out  IPL 2023 and Live Cricket Score. Like us on Facebook or follow us on Twitter for more sports updates. You can also download the NDTV Cricket app for Android or iOS.