Several football stars like Olivier Giroud, Antonie Griezmann, Zlatan Ibrahimovic hogged the limelight during Euro 2016 for their tattoos as well 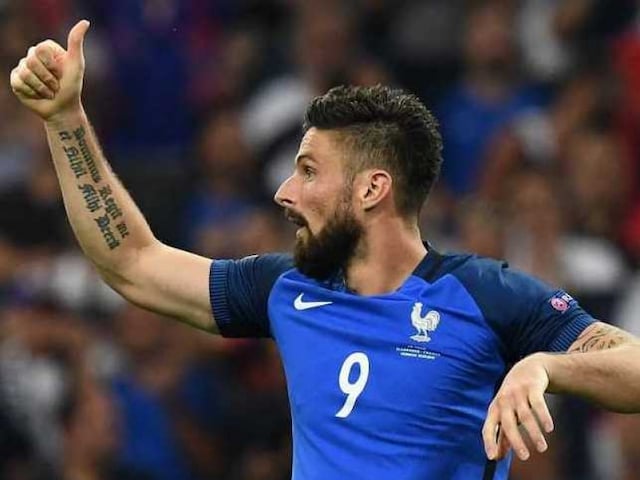 France striker Olivier Giroud has also been at the centre of attraction for both his goals and tattoos.© AFP

Ricardo Quaresma's eye-catching teardrop tattoo may be coated with real tears come the final whistle of the Euro 2016 final on Sunday but it could do wonders for the burgeoning body art business.

The Portuguese star has never explained why he has two drops under his right eye -- a tattoo which in gangland culture can mean someone has been killed.

But he is not alone at Euro 2016 in covering himself in art, often very personal statements.

Playing against Quaresma, France striker Olivier Giroud has a biblical quote, "The Lord is My Shepherd I Shall Not Want", written in Latin on his left shoulder.

Hotshot goalscorer Antoine Griezmann has an etching of Jesus Christ on his right shoulder. He also has the letters FAME inscribed, but no one knows whether Griezmann means this as initials or as a declaration.

Other Euro 2016 stars prefer more tribal, especially Maori designs, while some tattoos indicate a player's personality. Swedish ace Zlatan Ibrahimovic has a red dragon next to some playing cards and the slogan: "Only God can judge me."

Scott MacLaren, proprietor of the Fulham Tattoo and Body Piercing centre in London, said the tattoo has become ever more high prominent because of famous footballers.

MacLaren, who took over the business from his father and uncle eight years ago, numbers England international Nathaniel Clyne among his star clients.
- Conservative art -

"Nathaniel was in the week before the Euro started and spent 4-5 hours with us," MacLaren told AFP.

"Since he was at Crystal Palace he has been coming to us, I would say in all over the years he has spent 60-70 hours in our shop.

"Even now, though, he's at Liverpool he still travels down to have work done on him."

MacLaren, 29, said Clyne has a work in progress to add to the ones on his chest and both arms.

"We are tattooing a mini team shirt the size of a palm with his name on it and is going to be tattooed on the point of where his back and neck are joined," said MacLaren.

Clyne, who earlier on had a tattoo done of his signature, is one of many who have made their way to MacLaren's shop with former France, Arsenal and Chelsea defender William Gallas one of the earliest clients.

"He was here in my uncle and father's day and he brought along Didier Drogba, when he was in his first spell at Chelsea," said MacLaren.

"Once one got one then his friend at the club would ask him where he'd got it done and he'd come and it would start a chain reaction.

"It's largely rugby players and footballers from the sporting world who have them done," added MacLaren, who also numbers England scrum-half Danny Care among his clients.

MacLaren, whose father and uncle felt secure enough after he served his apprenticeship to leave him the business while they returned to driving iconic London black cabs, said the seven hours Clyne's England team-mate Vardy spent under the needle in May is the exception rather than the norm.

Footballers, though, he added are conservative with regard to the subject matter and what parts of the body sport are covered.

"The footballers don't like much weird stuff. Usually they have them on their arms and chest.

"The subject matter doesn't vary much with either religious imagery or pictures. They generally play safe and copy each other."

MacLaren, though, said that with the surge in popularity for tattoos amongst the high profile footballing caste there comes a cost.

"There are more tattoo shops opening, and with that more tattooists which means more competition for the likes of our place.

Comments
Topics mentioned in this article
Olivier Giroud Antoine Griezmann Ricardo Quaresma Jamie Vardy Zlatan Ibrahimovic France Portugal Euro 2016 Football
Get the latest Cricket news, check out the India cricket schedule, Cricket live score . Like us on Facebook or follow us on Twitter for more sports updates. You can also download the NDTV Cricket app for Android or iOS.