Germany, who beat Slovakia 3-0 in the Round of 16, will face either reigning European champions Spain or old rivals Italy in Bordeaux in the last eight next weekend 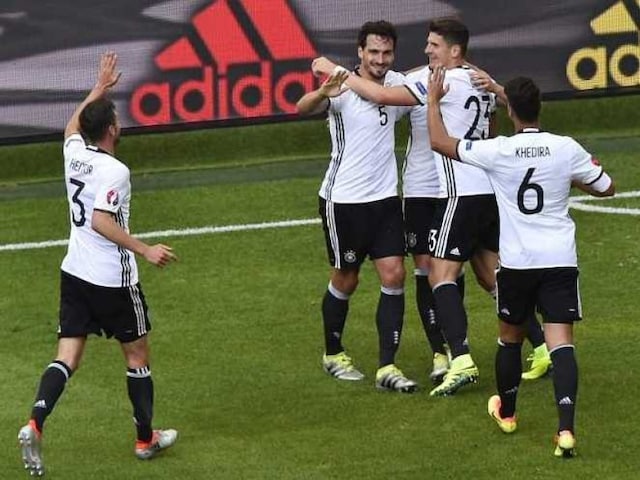 Joachim Loew said he was satisfied as a coach by the fact that Germany have reached the last eight without conceding a goal in any of their four matches at the tournament.© AFP

Germany still have plenty of room for improvement after easing into the Euro 2016 quarter-finals by beating Slovakia 3-0 on Sunday, coach Joachim Loew warned.

The reigning world champions were comfortable winners in their last-16 clash in Lille as Jerome Boateng, Mario Gomez and the excellent Julian Draxler all scored while Mesut Ozil had an early penalty saved.

"We put in a great effort, both defensively and going forward, but with all due respect to our opponents we cannot say from this that we are going to dominate the competition. We will have to improve to win the tournament," said Loew.

Germany will face either reigning European champions Spain or old rivals Italy in Bordeaux in the last eight next weekend but Loew said he is not worried about who his side meet next.

"I am sleeping well. Both teams are among the favourites. Italy are incredibly strong defensively while Spain are the best attacking side we have seen in recent years.

"We have to improve if we want to compete with the other teams to win the title. Our task now will be more difficult and we cannot leave our opponents any spaces because teams will punish us. We also have to take our chances in the games we have coming up."

The main source of satisfaction so far for Loew has been in defence with Germany having reached the last eight without conceding a goal in any of their four matches at the tournament.

"I am happy the defence has performed so well so far but now we will come up against much more dangerous sides who have top strikers," Loew added before heaping praise on Boateng, whose goal was his first for his country on the occasion of his 63rd cap.

"There is no need to say anything more about his value to us. That has been clear for years now.

"The defence was excellent today. Boateng and (Mats) Hummels won almost every challenge, they were focused, they helped build the play and then Boateng scored the goal."

Bayern Munich stopper Boateng had been a slight doubt ahead of the match due to a calf knock that forced him off in the 1-0 win against Northern Ireland.

He was substituted in the second half on Sunday along with midfielder Sami Khedira in order to prevent either player collecting a yellow card that would have seen them suspended for the quarter-finals.

"I am happy that his calf was okay. He is a player the side trusts," added Loew of Boateng.

Comments
Topics mentioned in this article
Jerome Boateng Julian Draxler Mario Gomez Mesut Özil Germany Slovakia Euro 2016 Football
Get the latest Cricket news, check out the India cricket schedule, Cricket live score . Like us on Facebook or follow us on Twitter for more sports updates. You can also download the NDTV Cricket app for Android or iOS.