Euro 2016: Germany Beat Northern Ireland To Top Group C, Qualify For Round of 16 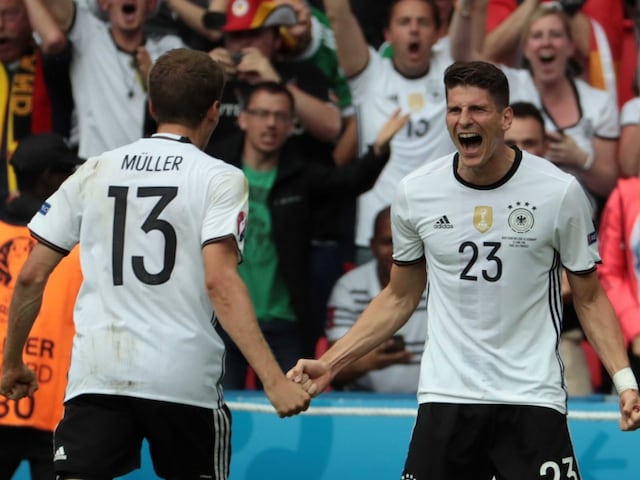 Mario Gomez scored in the 30th minute as Germany defeated Northern Ireland to qualify for the round of 16.© AFP

Mario Gomez struck as world champions Germany beat Northern Ireland 1-0 in Paris on Tuesday to qualify for the Euro 2016 knockout phase as winners of Group C.

Drafted in to address the goal-scoring problems witnessed in Germany's 0-0 draw with Poland, the on-loan Besiktas striker netted from Thomas Mueller's pass in the 30th minute at Parc des Princes.

That Germany did not win more handsomely was due largely to the excellence of Northern Irish goalkeeper Michael McGovern.

But it was enough to preserve their position at the top of the group on goal difference above Poland, who beat Ukraine by the same scoreline in Marseille.

Joachim Loew's side will now turn their thoughts to a last 16 tie against either Albania, Slovakia or the third-place team in Group F -- which is yet to conclude -- in Lille on Sunday.

Michael O'Neill's Northern Ireland, meanwhile, must wait to have their qualification confirmed.

They finished third in the group, but their 2-0 win over Ukraine last week puts them in a strong position to go through as one of the four best third-place teams in what is their first European Championship finals.

O'Neill kept faith with the team that had overcome Ukraine, but whereas his side had set the tempo in Lyon, they were immediately on the back foot against Germany.

With full-backs Jonas Hector and Joshua Kimmich pushing high up on either flank and Jerome Boateng and Toni Kroos lofting passes behind the Northern Irish defence, Germany effectively took up residence in the final third.

McGovern was solicited three times in the first 12 minutes, saving alertly with his body and feet from Gomez, Mesut Ozil and Mario Goetze, who dropped into an attacking midfield role to accommodate Gomez up front.

Mueller twice went close, thrashing a shot across goal and then striking the base of the right-hand post with a plunging header, before creating the opener for Gomez.

Gomez's subtle pass sent the Bayern Munich forward scampering through and after luring McGovern from his line, he showed great awareness to lay the ball off for Gomez, who steered the ball through a thicket of defenders and into the net.

Mueller then placed a shot against the bar from a Hector cut-back, while Gomez could only scuff meekly at McGovern when Ozil's pass and Goetze's dummy left him one-on-one.

All Northern Ireland offered in response was a Jamie Ward shot that went straight at Manuel Neuer, but their green-clad fans remained unbowed, volubly belting out their famous ode to flaming striker Will Grigg.

Goetze's luck did not change in the second half as he was brilliantly thwarted again by McGovern before sliding Hector's cross wide at the near post, and he was soon replaced by Andre Schuerrle.

The 31-year-old goalkeeper, who plays for Scottish club Hamilton Academical, saved one-handed from Sami Khedira's drilled effort and then produced a superb finger-tip stop to tip away a firm header by Gomez.

Comments
Topics mentioned in this article
Germany Northern Ireland Mario Gomez Euro 2016 Football
Get the latest updates on IPL 2020, check out the IPL Schedule for 2020 and Indian Premier League (IPL) Cricket live score . Like us on Facebook or follow us on Twitter for more sports updates. You can also download the NDTV Cricket app for Android or iOS.