Slovakia must now wait to see if they qualify as one of four best third-place best teams after their goalkeeper Matus Kozacik pulled off a string of save. 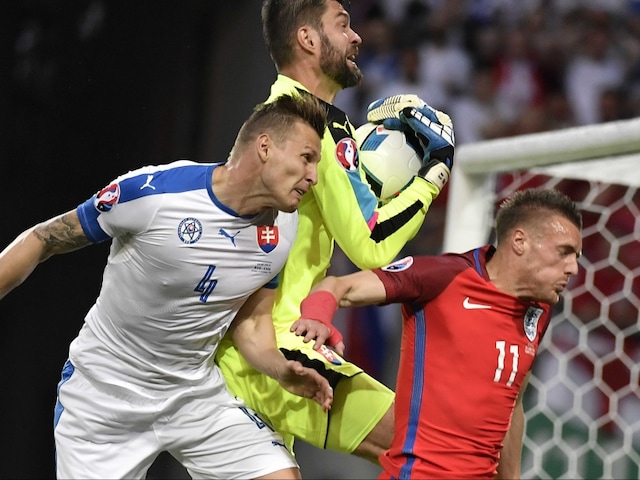 Slovakia goalkeeper Matus Kozacik (C) grabs the ball next to defender Jan Durica (L) and England forward Jamie Vardy during the Euro 2016 Group B match at Geoffroy-Guichard Stadium in Saint-Etienne on Monday.© AFP

Roy Hodgson's England secured their place in the last 16 of Euro 2016, but lost their status as Group B winners, after being held to a goalless draw by Slovakia on Monday.

Wales' 3-0 win over Russia in Toulouse meant the Three Lions finish second in Group B.

Slovakia must now wait to see if they qualify as one of four best third-place best teams after their goalkeeper Matus Kozacik pulled off a string of saves -- some more luck than judgement.

England will now play their last 16 game in Nice next Monday against the side who finishes second in Group F, most likely against Hungary or Portugal.

This was another frustrating night for England fans in Saint-Etienne.

It was at the Stade Geoffroy Guichard where David Beckham was sent off as England lost to Argentina on penalties in the last 16 of the 1998 World Cup.

Prince William, who turns 34 on Tuesday, was in Saint-Etienne, sat next to FA chairman Greg Dyke who has said Hodgson will remain England manager -- provided they reach the semi-finals.

#ENG's last-16 game will take place on Monday 27 June at the Stade de Nice, with a kick-off time of 8pm BST. pic.twitter.com/B9a8zeJTyP

The England boss boldly made six changes to team, starting strikers Jamie Vardy and Daniel Sturridge, who both scored off the bench in the 2-1 win over Wales.

He fired over early on, then had his shot blocked by Kozacik in a one-on-one after winning a sprint against Slovakia captain Martin Skrtel.

And only a fine tackle from right-back Peter Pekarik denied Sturridge at the near post in the opening 10 minutes.

Lallana was then denied by Kozacik's reflex save with half an hour gone.

England's frustration continued after the break.

At the other end, only the slightest of deflections off Kozacik's shoulder kept out Nathaniel Clyne's shot.

There was a big cheer from travelling England supporters -- the loudest of the night -- when Wayne Rooney came on for Jack Wilshere with 56 minutes gone.

Still a good performance by England. Will need to translate dominance into result. - Skrtel man of the match. - Sublime Wales. #EURO2016

Dele Alli, on for Lallana, then saw his shot cleared by Skrtel after finding himself unmarked when he arrived in the area at pace.

Only England fans could be heard as the second half wore on, nosily urging the Three Lions on in search of the crucial goal which never came.

Rooney was a constant menace after coming on, firing wide as the game entered the final 10 minutes while Harry Kane, on for Sturridge, had a couple of late chances -- all to no avail.

Comments
Topics mentioned in this article
England Slovakia Euro 2016 Jamie Vardy Wayne Rooney Daniel Sturridge Football
Get the latest Cricket news, check out the India cricket schedule, Cricket live score . Like us on Facebook or follow us on Twitter for more sports updates. You can also download the NDTV Cricket app for Android or iOS.