Even before England and Russia hit the field, hundreds of drunk and bare-chested supporters clashed with each other and police, hurling bottles and insults outside bars in the Vieux Port district 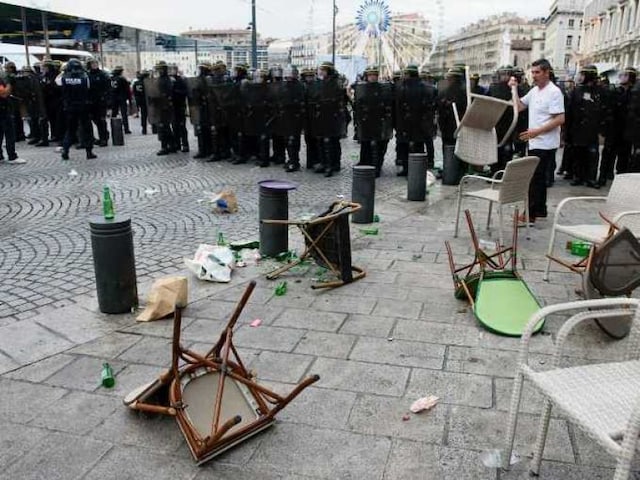 Police personnel deployed in Marseille, on the eve of England's Euro 2016 football match against Russia.© AFP

After a triumphant start to Euro 2016, France braced for more hooligan violence as England face Russia on Saturday, while a pilots' strike threatened fans' travel plans.

A tense France was finally able to party after winning the opening match against Romania and avoiding major hiccups as ongoing industrial unrest failed to disrupt transport to the Stade de France.

However, a strike by a quarter of Air France's pilots meant travellers risked delays and cancellations, and train services continued to be disrupted on the 11th day of a rail strike.

While France is on high alert for terror attacks, it is old-fashioned hooligans who have proved the first test for security forces, with two nights of clashes in Marseille.

Even before England and Russia hit the field, hundreds of drunk and bare-chested supporters clashed with each other and police, hurling bottles and insults outside bars in the Vieux Port district.

Police fired tear gas and ordered bars and restaurants on the quay to close, after the violence, which also involved French locals. Seven fans were arrested.

Marseille is determined to avoid a repeat of the violence during the 1998 World Cup when English hooligans clashed with Tunisia supporters in the Mediterranean city.

The European football championship arrived in a glum France desperate for some good news after last year's terror attacks were followed by months of industrial unrest, political turmoil and floods.

A much-needed 2-1 win against Romania, which came when Dimitri Payet fired in a long-range effort in the final minutes of the match, broke the tension with supporters in the stadium and bars around the city erupting into cheers.

"Even if France is breathing easier this morning, it is still holding its breath, hoping for victory in this Euro, to ward off the threat of attacks, for a stop to the social conflicts. Finally," it said in an editorial.

While 80,000 football fans cheerfully submitted to heavy security to enter the Stade de France, fears of an attack have dampened enthusiasm and a massive Paris fan zone under the Eiffel Tower was only half-full, according to police.

Those who did go out were unperturbed.

"There is a lot of security here, but it's OK," said 20-year-old Ruairi Scott from Belfast, as he downed pints of beer.

"I was a little worried before we came here, but not anymore. I feel safe."

But German student Julia Settgast, 28, said she was too jittery to go out and watch the match.

"In Germany I would watch the matches in bars or at a public viewing, but in France... I am afraid of terrorism," she told AFP.

Some 90,000 police and private security guards have been deployed to protect players and around two million foreign visitors expected for the matches at 10 venues around the country.

President Francois Hollande hailed the "smooth" start to the tournament on Friday, despite numerous strikes over pay, conditions and government reforms to labour law.

However the industrial action is far from over.

While the company's chief executive Frederic Gagey has promised that more than 80 percent of flights would operate, he has not ruled out "cancellations and last-minute delays".

The company predicts "the same trend for the coming days" of the strike.

The head of the CGT union Philippe Martinez, who is spearheading opposition to labour reforms, has vowed not to be "blackmailed with the Euro."

Workers are planning a massive nationwide rally on Tuesday against the law which government forced through parliament without a vote.

Meanwhile rail operator SNCF voted to continue its walkout throughout the weekend as negotiations remain blocked and rubbish collectors and incineration plants would remain on strike until Tuesday.

While Paris and Marseille scrambled to clear uncollected rubbish, there were still stinking piles on pavements in some districts.

The CGT voted to suspend a strike at a Total oil refinery in Normandy after 25 days due to financial losses to strikers and "enormous pressure" from Total, said union representative Thierry Defesne.

However he said the strike would resume for the labour reform protest on Tuesday.

Two of the country's eight refineries remain on strike but massive fuel shortages which led to long lines at petrol stations last month have eased.

Comments
Topics mentioned in this article
France Romania England Russia Euro 2016 Football
Get the latest updates on IPL 2020, check out the IPL Schedule for 2020 and Indian Premier League (IPL) Cricket live score . Like us on Facebook or follow us on Twitter for more sports updates. You can also download the NDTV Cricket app for Android or iOS.